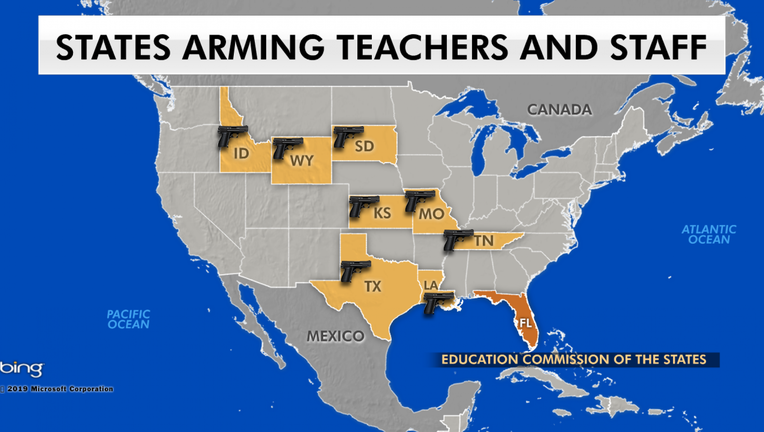 According to the Education Commission of the States, at least eight other states allow some teachers or other school employees to have guns. They include Idaho, Kansas, Louisiana, Missouri, South Dakota, Tennessee, Texas and Wyoming. (Elina Shirazi)

OKEECHOBEE, Fla. - Teachers in seven Florida county school districts will soon be locked and loaded thanks to a state law enacted this month that provides schools with the option to allow teachers to carry concealed guns.

The law expands on a safety measure known as the "guardian" program. The program was created in response to the February 2018 Parkland massacre but did not allow teachers to carry guns, in part due to the recommendation of former Gov. Rick Scott. Under the original law, guardians were either non-instructional personnel who volunteered, or employees--such as school resource officers-- hired specifically to protect students.

"That initial program [said] everybody except classroom teachers ... could be armed. With the recent legislation, our board approved to train classroom teachers to be able to further protect our students," said Dylan Tedders, the assistant superintendent of Okeechobee County.

Okeechobee, a school district with roughly 6,600 students, is one of seven districts taking advantage of the new option to arm teachers. Tedders explained that school districts must first vote in favor of it and then teachers have to volunteer. The other six districts arming teachers include Bay, Gilchrist, Lafayette, Levy, Putnam and Suwannee counties.

"You can’t have a hashtag of putting students first and not want to use every opportunity to keep them safe, so I think districts have to really look at that," Tedders said.

But not every school district in the state has embraced the law. The 60 other school districts in the state, including the largest ones -- Miami-Dade, Broward and Orange counties -- have not approved it. The state does not track how many districts or teachers are taking part in the program, a matter that has become a point of contention.

“For you to implement a program that does more harm than it does good — and we don’t even know who does it — is absolutely asinine and it’s counterproductive to what the agency for school safety is supposed to be doing,” State Sen. Oscar Braynon, D-Miami Gardens, told the Miami Herald recently. “This is the dumb, backwards stuff that we do here.”

But more rural districts in the state are happy to take part in the program.

Tedders said his district already has several volunteers. One teacher participating in the guardian program and who wished to remain anonymous due to safety concerns said they are ready for the responsibility.

"Twenty years as a teacher, you know your kids, you wouldn’t want to see anything bad happen to any of them," the teacher said. "For me, the pros definitely outweighed the cons. You know you have to be ready and prepared if something happens. You have to be willing to do what needs to be done."

"We are worried about the accuracy of that teacher being able to shoot, or to be able to shoot at all in that type of high, intense adrenaline type of situation," said Angie Gallo, the co-char of the Florida Coalition to Prevent Gun Violence. "They are just not trained for it, they are not trained for it like law enforcement are."

"This we consider as a force multiplier because, as we have learned, time is the most critical factor," said Sgt. Michael Hazellief, one of the officers responsible for training guardians. "If an incident were to occur, we want as many people there as immediate as possible … no one is going to be authorized to go into a school or classroom with a firearm under this program, if they haven’t made it through me."

Some parents who have kids enrolled in the district think it’s a good idea as well. They say the new law will eliminate schools as soft targets.

"If all else fails and my child is sitting in a classroom with some psycho coming through that door, I want my child behind that teacher, and I want that teacher equipped to do something to help themselves, which is also going to help my child," said Adam Cohen, whose two kids are enrolled in Okeechobee County schools. The family moved to Okeechobee from Parkland after the 2018 Parkland Massacre. Cohen’s daughter, now in the ninth grade, was enrolled in Parkland’s middle school at the time.

"I was concerned in Parkland," Cohen said, "people were getting consumed and misdirected in a lot of politics, a lot of things, there was a lot of energy and there wasn’t a lot of action. There weren’t things happening that were making safety changes for the kids in the schools and I was concerned that wasn’t going the right direction."

Another Parkland parent, Andrew Pollack, describes himself as an expert, but not by choice. His daughter, Meadow, was killed during the Valentine’s Day shooting at Marjory Stoneman Douglas High School last year. Pollack said he strongly supports arming teachers, saying that when police are minutes away, seconds matter.

"You've seen multiple mass shootings stopped by people that saw something, said something and then they saw someone actually did something, not like in Parkland -- where no one did anything and that it was these failures and these policies that are in the schools or across the nation," Pollack said.

School employees and teachers who volunteer to pack heat have a long list of requirements, including passing drug tests, psychological exams and over 100 hours of training. Presently, in addition to the seven counties that have opted to arm teachers, 32 of Florida's 67 counties have opted to arm school personnel other than teachers. They include Broward County, where the Parkland massacre took place, as well as Brevard and Duval. According to the Miami Herald, nearly 1,100 school employees are armed statewide. The state doesn't track how many are teachers.

"It is a very unique measure, you know. It is in response to very unique and very violent incidents that have happened nationwide. All schools are having to take measures such as ensuring that there are safe corners, blinds in your classroom doors, that the lockdown procedures are in place. But we have seen that even with those measures in place, things happen," said Tuuli Robinson, the principal at North Elementary School in Okeechobee.

But many school districts say they are reluctant to arm teachers and think the law is a bad idea.

“Teachers have a lot on their plates,” Tamara Shamburger, chairwoman of the Hillsborough County school board, in Tampa, told the Wall Street Journal. “Their focus has to be on educating their kids and not fighting off bad guys.”

Tedders said he understands the hesitation in some districts, but that he firmly believes they are going about the process in the safest manner possible.

"I think the negativity would be that we are passing out guns at the door and that is not what we are doing," Tedders said.

According to the Education Commission of the States, at least eight other states allow some teachers or other school employees to have guns. They include Idaho, Kansas, Louisiana, Missouri, South Dakota, Tennessee, Texas and Wyoming.

Since 2018, legislation to allow teachers and other school staff to carry firearms has been proposed in a handful of additional states, including Washington, Nebraska, Minnesota, Wisconsin and Oklahoma.