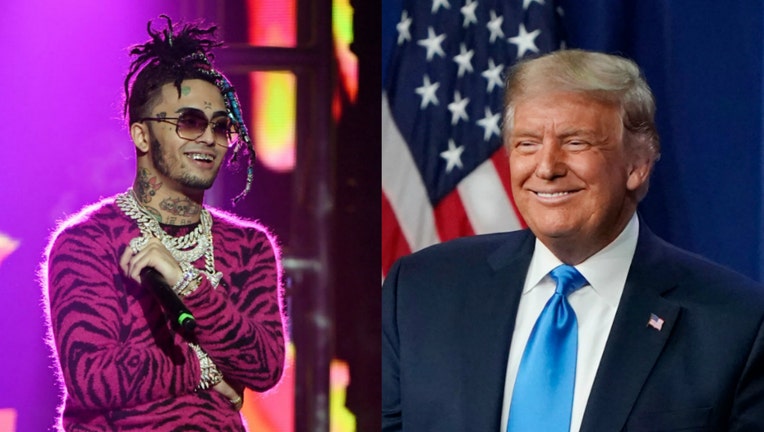 The “Gucci Gang” rapper took to Instagram on Monday to share a photoshopped image of himself shaking hands with the president. He captioned the picture, “THE DAY I MET TRUMP #trump202022020.”

The rapper followed up that post with a video shared on his Instagram Story in which he gives an expletive-filled explanation for his endorsement. He insulted the Democratic nominee noting that he takes issue with Biden’s plan to tax wealthy people, a category the “Be Like Me” artist believes he falls under.

The video, which was shared by multiple social media users despite being removed by Lil Pump, also sees the rapper lambasting “sleepy Joe” and praising his Republican opponent one week before the 2020 race comes to a close.

The social media endorsement caught so much backlash that Lil Pump’s label, Tha Lights Global, issued a statement to Billboard noting that it supports its musicians’ rights to vote the way they wish, but noted that it backs Joe Biden and Sen. Kamala Harris for the White House.

“Tha Lights Global supports everyone’s right to choose a Presidential candidate, however we want to make clear we do not support Donald Trump," Tha Lights Global CEO Dooney Battle said in a statement to the outlet. “We support Joe Biden and Kamala Harris for President and Vice President because we believe they offer an alternative to an administration that has ignored systemic racial injustice, promoted hate speech and inhumane immigration policies, ignored the problem of climate change and rights of LGBTQ+ individuals as well as many other actions contrary to democratic ideals. We believe it is our obligation to speak out regarding this historic election and we believe in a free society where all of our artists can express their opinions.”

Neither representatives for Lil Pump nor That Lights Global immediately responded to Fox News’ request for comment.