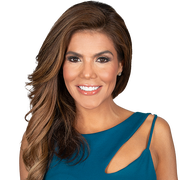 Michelle Alegria is the traffic reporter at FOX 32 Chicago with more than 20 years of broadcast journalism experience.

Born and raised locally, Michelle studied broadcast journalism at Columbia College Chicago. She began her broadcast career as a reporter at KOBR-TV in Roswell, New Mexico. Her next move was to El Paso, Texas where she worked as a weekend news anchor and general assignment reporter at KTSM-TV.

Her career came full circle when she moved back to Chicago as a general assignment reporter at CLTV News. In 2000, Michelle was recruited by ABC-7 to become a personality on the station’s top-rated magazine show, “190 North.” She stayed in that role for 10 years, winning several Emmy Awards along the way and co-hosting the station’s live annual New Year’s Eve show, “Countdown Chicago.”

A class at Second City Chicago spurred her interest in acting, and she earned several roles as a TV reporter, most notably in Sofia Coppola’s “The Bling Ring,” and on popular TV shows including “Grey’s Anatomy,” “Castle,” and “How to Get Away with Murder.”

As a Chicago native, Michelle has always known the quickest ways to zip around town and is proud to share them with viewers. A health enthusiast and dedicated mom, her passions include fitness, home entertaining and celebrating the people and places that make a community thrive. Michelle joined FOX 32 in January 2018.