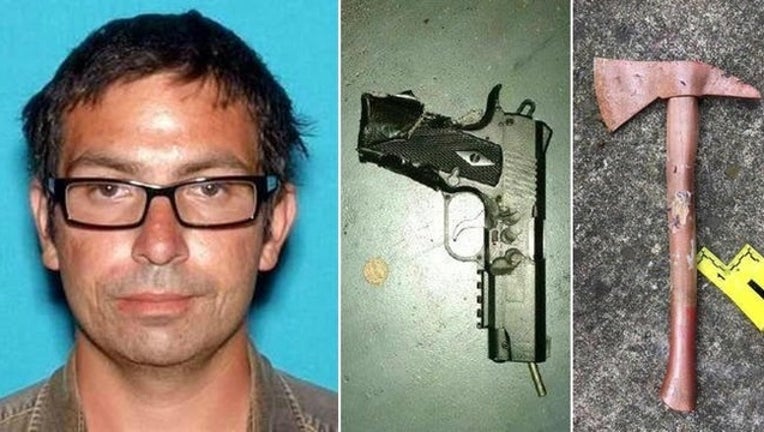 NASHVILLE, Tenn. (AP) - What initially appeared to be another mass shooting at a movie theater ended up being an attack by a disturbed homeless man who wasn't armed with a real gun and was eventually shot and killed by police.

Vincente David Montano, 29, bought a ticket for "Mad Max: Fury Road" at a theater in a middle-class community in southern Nashville on Wednesday and entered with pepper spray, an airsoft pellet gun and an ax, Metro Nashville Police spokesman Don Aaron said.

Some of the theatergoers in the audience ran outside and alerted officers who had responded to a vehicle crash nearby, police said in a news release issued late Wednesday.

South Precinct Officer Jonathan Frith, a six-year veteran, was the first officer to encounter Montano, police said. Montano pointed his pellet gun at Frith and pulled the trigger, prompting Frith to fire one round from his patrol rifle in self-defense, officials said. Frith then backed out of the theater while keeping Montano contained inside as SWAT officers responded.

At that point, Montano began to use the pepper spray, and officers said they encountered a cloud of it as they entered to take Montano into custody. Montano fired his pellet gun again and four SWAT members fired back, police said.

"It's important to note that during Montano's interaction with the SWAT team, members, he had multiple and continued opportunities to end the situation. He chose not to," Aaron said.

Montano attempted to flee out the rear door of the theater and as he emerged with ax in hand and started toward officers, five of them opened fire, police said. Montano was struck and killed.

Only Montano was killed. One man was cut on the shoulder, evidently by the ax Montano carried. That man, his wife and their daughter were treated for pepper spray, Aaron said.

He also Montano had a canister of propane, lighter fluid and a lighter and may have intended on setting off an explosive device. But he said Montano had made a gash on the canister, rendering it useless.

"This individual has had significant psychiatric or psychological issues," Aaron said.

Murfreesboro, Tennessee, police reports from 2004 show Montano's long history of mental problems, with his mother telling officers in one case that he heard voices telling him to do things.

His mother, Denise Pruett, called police for help at least twice in 2004. In February of that year, Denise Pruett told officers he was destructive and broke a coffee table and jewelry box. Police took Montano to a mental hospital for an evaluation, though the results are unclear.

In September of that year, police returned after the mother and son had an argument over him not mowing the lawn, the reports show.

Then, just two days before the theater attack, Pruett contacted Murfreesboro police and said Montano was missing. She told police that her son was diagnosed with paranoid schizophrenia in April 2006, according to the missing person report.

In May of this year, authorities in Texas contacted Pruett and said she needed to file a missing persons report in Murfreesboro, the report states. But it does not specify why Texas authorities were concerned he was missing or believed he was in Tennessee.

Pruett told police she hadn't seen her son since March 2013. She brought to Murfreesboro police a copy of a Tennessee identification card for Montano that listed an address for Nashville Rescue Mission, a homeless shelter. The report lists his address as "homeless" and says he "has a hard time taking care of himself."

Attempts to reach Pruett through phone numbers listed for her and other messages have been unsuccessful.

Nashville police say Montano had been committed at least three times while living in Murfreesboro; that he was reported to have lived in a number of states over the years, including Texas, Missouri, Alabama, Illinois, and Florida; and that he was most recently believed to be homeless.

Nashville police also noted that Montano had been arrested in Murfreesboro in 2004 for assault and resisting arrest.

As more details of the attack and Montano's troubled past emerged, it began to appear less likely that he intended to inflict mass casualties such as those attempted by a theater shooter recently in Louisiana and carried out two years ago by a shooter in Colorado.

Instead of a packed house showing a new film, Montano waged his attack in a theater where only seven others were present at midday, watching a movie that had already been out for some time. He was armed with a pellet gun, not a weapon with bullets, and chose to use pepper spray, not the gun, when he began his assault. One of Montano's two backpacks was detonated and found to contain a fake bomb, Aaron said. The other backpack contained nothing harmful, according to police.

Aaron said the responding officer thought the gun was real and that he heard popping noises when Montano pulled the trigger, prompting him to fire his service weapon.

"The gun is a very realistic looking gun that strongly resembles a semiautomatic pistol," Aaron said. "If someone confronted you with it, you would think it was a real pistol."

The violence at the Carmike Hickory 8 complex comes about two weeks after a 59-year-old drifter opened fire inside a movie theater in Lafayette, Louisiana, fatally shooting two before killing himself. It also happened while jurors in Colorado decide whether the man who killed 12 and wounded 70 others during a theater shooting in 2012 should get the death penalty.