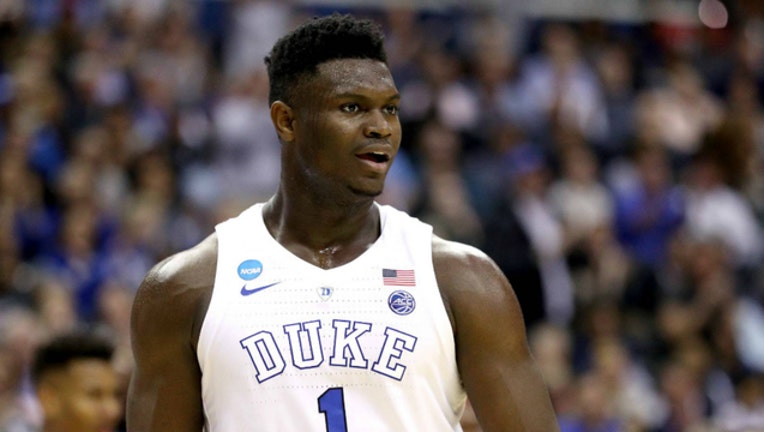 CHICAGO (AP) - Zion Williamson's immediate future is likely to be decided by the bounce of 14 pingpong balls.

The NBA draft lottery is Tuesday night in Chicago, where some team will be awarded the No. 1 pick in the June 20 draft - and, presumably, the chance to grab Williamson with that selection.

New York, Cleveland and Phoenix share the best odds: They've all got a 14 percent chance of winning under a new format that was designed in 2017 and put into play this year to discourage teams from all-out tanking. Williamson, the consensus college basketball player of the year this past season, is expected to be in the audience when the lottery results are announced.

It is very much a lottery; the machine is exactly like the one used in many state lotteries and is manufactured by Smartplay International, which works with clients all over the world for various drawings. Smartplay even certifies the 14 pingpong balls that will be used to churn out the four-number combination will net some team the No. 1 pick.

The Knicks, Cavaliers and Suns will all be assigned 140 of the possible 1,001 four-number combinations. Chicago gets 125, giving the Bulls the fourth-best shot. Charlotte, Miami and Sacramento will be assigned 10 of those combinations, giving them the longest odds of winning the No. 1 pick. The Kings won't be rooting to win; their pick goes to Boston, unless it's the first pick, and then it goes to Philadelphia.

By the time the telecast of the lottery begins at 8:30 p.m. Eastern, it will already have long been over. The actual drawing takes place in a secure room about an hour beforehand, witnessed by a representative from each of the 14 lottery clubs, NBA officials and some members of the media. None of them can leave or communicate with the outside world in any way until after the results are announced on television.

"I'm not one to waste a lot of time on things I can't control - which is essentially anything that happens at my house, and the lottery," Atlanta general manager Travis Schlenk said.

The Hawks could be big winners Tuesday. If Dallas doesn't get one of the top four draft picks, the Mavericks' pick - which would be No. 9 if they don't move up - goes to Atlanta, which has its own lottery pick as well and a 10.5% chance of winning the No. 1 selection.

The Knicks are hoping history repeats: The first draft lottery was 1985, the Knicks won it and used that No. 1 pick to draft Patrick Ewing - who will represent New York on stage Tuesday night.

"We're proud to have one of the all-time Knicks greats sit on the dais," Knicks president Steve Mills said.

It'll be a Georgetown center reunion - the Heat are sending Alonzo Mourning as their onstage representative.

The conference finals take center stage this week: Portland at Golden State in Game 1 in the West, which follows the draft lottery; Toronto at Milwaukee in Game 1 in the East, which begins on Wednesday. But in Chicago, it'll be all about the future - the G League Elite Camp started Sunday and concludes Tuesday, then the draft lottery, and then the NBA draft combine starts Thursday.

Williamson, his Duke teammates R.J. Barrett and Cam Reddish, Murray State star guard Ja Morant and about 100 other draft-eligible players will be in Chicago throughout the week, and many will likely find their way to the lottery. Not all will play or work out at the combine, but most are expected to at least take time to meet with some teams and submit to some basic medical exams.

"I think it's deeper than people say," Heat president Pat Riley said when asked to evaluate the draft. "I'm not going to name names, but I've seen 30 players that are very good players."

Who goes where, that won't be known until June 20.

But the order will be set Tuesday - and Williamson will finally have a very good idea of where he's heading.