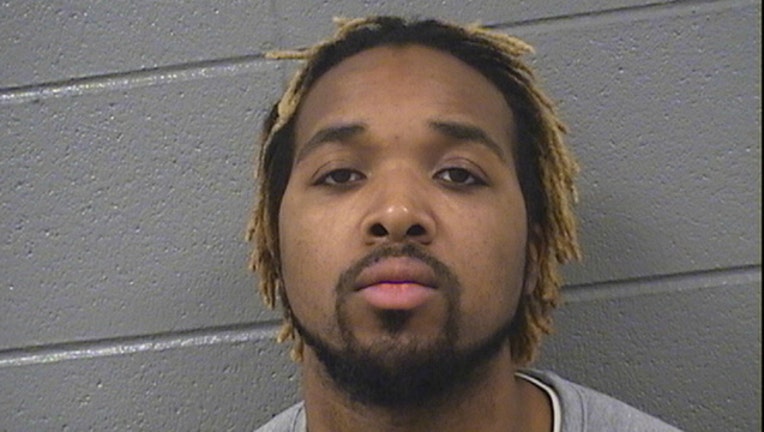 CHICAGO (SUN TIMES MEDIA WIRE) - Ald. Carrie Austin’s grandson Kenneth Austin — who was free on bond in a 2016 attempted robbery in Chicago — has been arrested here in connection with a fatal shooting last month in Louisville, Kentucky, the Chicago Sun-Times is reporting.

Kenneth Austin, 28, was taken into custody on Feb. 8 on the South Side based on a warrant from Louisville, authorities said.

A spokesman for the alderman, one of Mayor Rahm Emanuel’s most powerful City Council allies, confirmed Kenneth Austin is Carrie Austin’s grandson but had no further comment Monday. Carrie Austin will issue a statement Tuesday, the spokesman said.

Kenneth Austin has been indicted on charges of first-degree murder, robbery, tampering with evidence and possession of a handgun by a felon in connection with the fatal shooting of a 25-year-old man during a robbery last month in Louisville, said Jeffrey Cooke, a prosecutor there.

Kenneth Austin was being held in the Cook County Jail.

He’s the son of Kenny Austin, who resigned from a $72,384-a-year city laborer’s job in 2015 after an internal investigation concluded he crashed a city vehicle while driving on a suspended license in 2012, then had a co-worker cover for him to avoid taking a mandatory drug test.

Kenneth Austin is one of four Chicago men charged with robbing and fatally shooting John Thomas Grover on Jan. 30 in his home in Louisville. One co-defendant, Christopher Champion, 30, also was arrested on a warrant in Chicago and was being held in the Cook County Jail.

Gerald Carter, another defendant in that Kentucky murder case, faces separate charges for allegedly robbing a woman at gunpoint in Louisville and stealing her cellphone on Dec. 21. Louisville police said they used a tracking device in the phone to locate Carter and another suspect from south suburban Markham — and recover the woman’s phone.

Austin faces separate charges in an attempted robbery last year in the 3100 block of South Wells in Chicago. According to police, he and an accomplice were in a car that pulled up to a 23-year-old man on July 21. One of the men in the car jumped out, pointed a weapon and announced a holdup, but the victim said he didn’t have anything and the robbers fled in the car, police said.

Chicago Police officers stopped the black Kia in the 3400 block of South Shields and recovered a replica gun from the car. Austin and Isiah Davis have been charged with attempted robbery. Austin was out on bond in that case at the time of the Louisville killing, court records show.