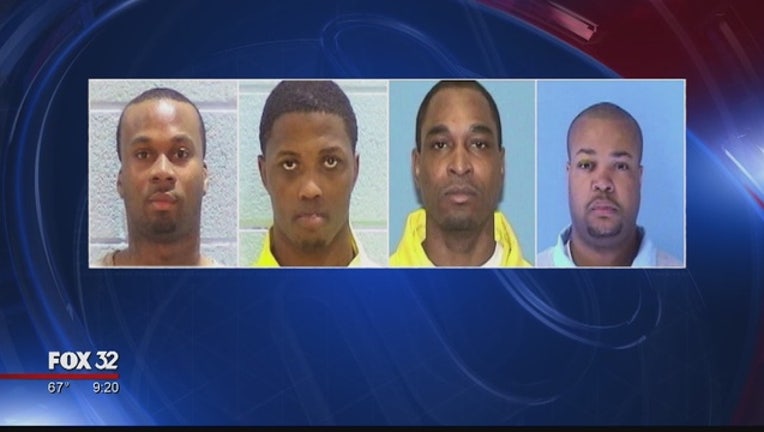 But Moss stepped outside his family home near 57th and Shields anyway — and walked straight into the path of Byron “B-Rupt” Brown, a violent member of the notorious Hobos street gang bent on revenge, the Chicago Sun-Times is reporting.

Moss wasn’t in a gang. He was a semi-professional basketball player in the wrong place at the wrong time. Brown pointed his gun at Moss, ordered him to lie on his stomach, and he shot Moss 10 times execution-style. He left Moss to die in the street in front of his family’s home. And three months later, Brown bragged to a federal informant that, “I popped him. I. That was me.”

Before he was sentenced, Brown took a moment in front of the judge to complain that his young children would be left without a father when he went to prison, that he and others “allowed ourselves to be programmed in the streets,” and that humans don’t choose their path in life — God does.

When he finished, Brown gave a half-hearted wave to the relatives of his victims, who were seated in the courtroom gallery.

“It astounds me that you sit there and can do anything to try to evoke sympathy for the fate that has befallen you because of the consequences of your criminal actions,” Tharp said.

Storino told the judge that Brown had been recruited into the Hobos gang by Arnold Council, one of its convicted leaders, and provided security to its drug lines. The feds have described the gang as “an all-star team of the worst of the worst” that grew out of the now-demolished Robert Taylor Homes. Storino said Brown was proud of his membership.

“The Hobos recruited the worst of the worst,” Storino said. “That’s what they got in Byron Brown.”

A federal jury found six Hobo leaders guilty of a racketeering conspiracy in January. Brown pleaded guilty to his role in the conspiracy in August 2014. And even though Brown faced a mandatory life sentence, the feds asked the judge to give him two life sentences to make sure he “lives out his life in prison.”

Earlier, prosecutors had agreed to recommend no more than 40 years for Brown in exchange for his cooperation against other members of the gang. However, the feds say Brown blew it, falsely implicating a co-defendant in a murder. The judge said prosecutors could not bring evidence of Moss’ murder into the Hobo leaders’ trial because of Brown’s lies.

Brown killed Moss after fellow Hobo Rodney Jones was shot multiple times by members of the rival Row Row Gangster Disciples in the area where Moss lived. The feds say Moss was not a member of a gang. Rather, he was an aspiring basketball player who had been playing ball in Portugal. Like many of Brown’s victims, Storino said, Moss was in the “wrong place at the wrong time.”

The feds say Brown also murdered Kenneth Mosby in May 2008 while Mosby sat in his SUV. Then, five days later, they said he fatally shot Daniel Dupree while trying to rob him of his watch while he sat in a Cadillac. Prosecutors said Brown also took part in a January 2008 armed home invasion that ended with the shooting death of Larry Tucker.

Finally, they said Brown participated in a July 2008 burglary that led to the death of Tommye Ruth Freeman. Brown was in a getaway car fleeing Chicago police after the burglary when it crashed into Freeman’s vehicle, the feds say. She died of her injuries.

“Poor Miss Freeman never knew what hit her,” Tharp said. But then he added, “her death is no less egregious than the death of Mr. Moss.”