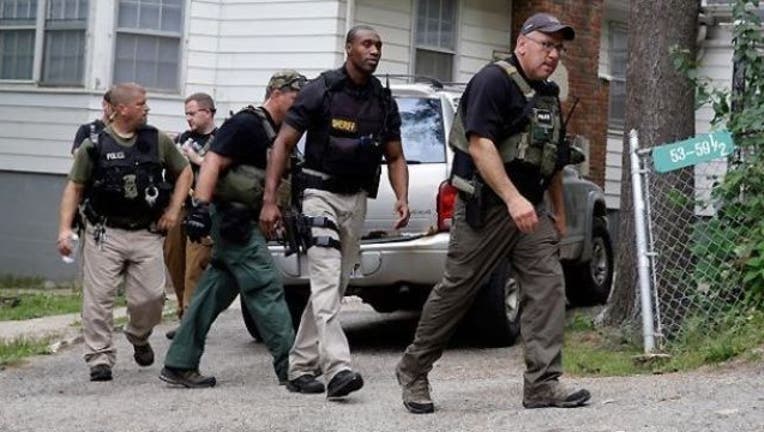 FOX LAKE, Ill. (AP) -- The manhunt for three suspects wanted in the killing of an Illinois police officer threatened Thursday to dampen the Labor Day weekend across one of the state's most popular recreational areas, a boating and fishing playground known as the Chain O' Lakes.

The region normally draws tens of thousands of visitors for end-of-summer fun, but concerns mounted that tourists might decide to go elsewhere because of the heavy police presence and fear that the fugitives could be hiding somewhere in the lush landscape of lakes, wetlands and forest glens.

"People are concerned about those individuals. And the few customers I get in here, that's all they talk about," said Marciano Martinez, co-owner of the popular Dockers restaurant, where diners can sit on a lakeside pier under plastic palm trees.

Also Thursday, authorities said they had recovered video from a homeowner's security system that could provide clues in the search for the three men suspected in the slaying of Lt. Charles Joseph Gliniewicz.

The homeowner told investigators the video shows three people near the scene of the shooting. The recording was turned over to the Department of Homeland Security for analysis, and results were expected later in the day, Lake County Major Crime Task Force Cmdr. George Filenko said, though a public briefing was not planned.

Local investigators hadn't viewed the video because specialized equipment was needed to retrieve the footage from a hard drive. Authorities did not explain how the homeowner was able to see it.

Searchers have been hampered by the lack of a description of the suspects beyond the vague one that came from the officer, who told dispatchers only that he was pursuing three suspicious men -- two white, one black -- moments before he was shot.

In the days since Gliniewicz's death in Fox Lake, images of the sleepy village north of Chicago have circulated widely: helicopters hovering over marinas, forests and homes; officers with rifles at the ready; and SWAT on rooftops with binoculars.

Business at Dockers was already down by half since the officer was slain, Martinez said. And unless the suspects are captured, having killers on the loose could drastically hurt business on the last big weekend of the summer.

At another restaurant hugging the lake, El Puerto, several regular diners said they saw fewer jet skis and power boats than usual at this time of year. From a nearby sandbar, Immer Hernandez reported seeing just one boat where there are typically 20 to 60.

Asked if the manhunt was to blame, he said, "I'm sure that's what it is."

Other images, more sad than frightening, also served as reminders of the attack that took the life of the popular 30-year police veteran. Many trees along the village's main streets were wrapped with blue ribbons -- a traditional symbol of the protection police provide -- in honor of Gliniewicz, who was 52.

Flags flew at half-staff, and signs with the officer's picture hung in storefront windows. Authorities announced Gliniewicz's funeral was planned for Monday in nearby Antioch.

Forecasts for hot, sunny weather would make the area, with its 15 interconnected lakes, a particularly attractive destination this Labor Day. According to the Chamber of Commerce in nearby Antioch, the lakes can draw 100,000 people on holiday weekends as visitors pour in from Chicago, about 50 miles to the south, and Milwaukee, about 50 miles to the north, and elsewhere.

What makes the region so popular with tourists is, potentially, the same thing that makes it a good place to hide. During the manhunt, sheriff's dispatchers directed patrols to search cabins, barns and forests that dot the rural landscape and its many forest preserves.

The skittishness about fugitive suspects is shared by many of the 10,000 permanent residents of Fox Lake.

"This is a community where people don't lock their doors at night, and now they are locking their doors and staying inside," Martinez said.

Others downplayed the prospect of a sharp decline in visitors.

The obvious presence of so many police and media might actually reassure visitors, said Linnea Pioro, executive director of the Fox Lake Area Chamber of Commerce & Industry.

"What better place to be: Everybody is very watchful," she said.

Still, any falloff in visitors comes with a potentially steep price.

Tourism is a primary economic engine for Lake County. Travelers spend more than $1.2 billion annually on lodging, restaurants and other expenses there. In Illinois, only Cook and DuPage counties attract more tourist cash, according to a U.S. Travel Association report released in 2014.

Danielle Torres, the owner of Dino's Den restaurant, agreed that business is likely to be less brisk over the next few days. But she didn't care.

"Our concern is for Joe's family and catching these guys," she said, referring to Gliniewicz.

Anyone who does decide to visit, she added, is going to see a Labor Day weekend like no other.

"It won't be like a regular Labor Day ... joyous, a lot of barbecues, people on the lake," she said. "It is going to be quieter, (and) much more subdued."