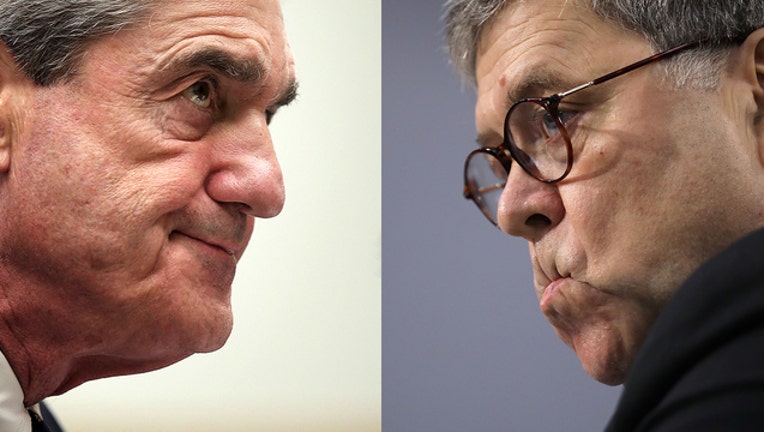 WASHINGTON (AP) - Special counsel Robert Mueller expressed frustration to Attorney General William Barr last month about how the findings of his Russia investigation were being portrayed, saying he worried that a letter summarizing the main conclusions of the probe lacked the necessary context, a Justice Department official said Tuesday night.

Mueller communicated his agitation in a letter to the Justice Department sent just days after Barr issued a four-page document to Congress and to the public that summarized the special counsel's conclusions about whether President Donald Trump's campaign had conspired with Russia and whether the president had tried to illegally obstruct the probe. Mueller and Barr had a phone call the following day.

"After the Attorney General received Special Counsel Mueller's letter, he called him to discuss it," Justice Department spokeswoman Kerri Kupec said in a statement.

"In a cordial and professional conversation, the Special Counsel emphasized that nothing in the Attorney General's March 24 letter was inaccurate or misleading. But, he expressed frustration over the lack of context and the resulting media coverage regarding the Special Counsel's obstruction analysis," she added.

Justice Department officials have said they decided it made more sense to release the bottom-line findings of Mueller's report rather than include the detailed legal analysis behind them. They also decided against releasing summaries that Mueller's team had prepared.

The letter lays bare a rift between the Justice Department and the special counsel about whether Barr's summary adequately conveyed the gravity of Mueller's findings. Barr wrote in his letter that Mueller did not establish that the Trump campaign colluded with Russia. He also said Mueller had not reached a conclusion on whether Trump obstructed justice.

The letter is likely to be a central focus at Wednesday's Senate Judiciary Committee hearing with Barr. The appearance is Barr's first since he released a redacted version of Mueller's report on April 18. It will bring him face-to-face with Democrats who have accused him of spinning Mueller's findings in Trump's favor and understating their significance.

The Washington Post was first to report the contents of the letter.

Rep. Jerrold Nadler, the Democratic chairman of the House Judiciary Committee, which has been negotiating with Barr over a Thursday appearance, demanded the letter by Wednesday morning.

"The Attorney General has expressed some reluctance to appear before the House Judiciary Committee this Thursday," Nadler said in a statement. "These reports make it that much more important for him to appear and answer our questions."