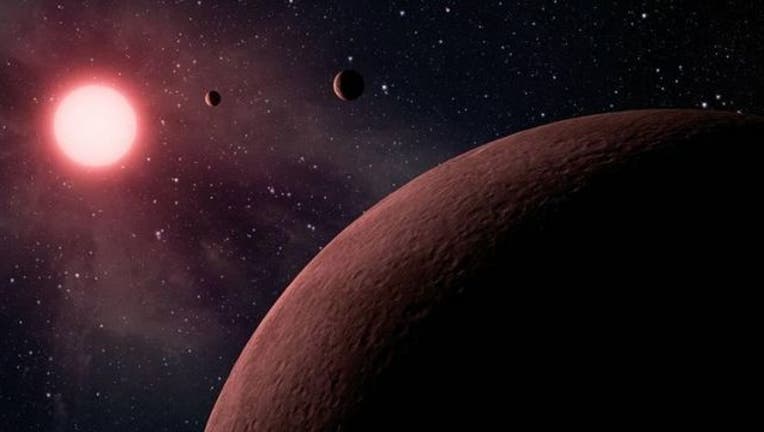 FOX NEWS - The question "Are we alone in the universe?" has bewildered mankind for eons as the search for alien life thus far has yielded no results.

But science's latest discovery may give new hope on that front —and it could be closer than you think.

Newly discovered planet Ross 128 b has all of the characteristics of a planet that could support life, astronomers wrote in a new research paper detailing their findings.

"Stellar activity is probably the highest concern regarding the emergence of life, and even the survival of an atmosphere, on planets orbiting M dwarfs," the paper reads. "Restricting the target list to quiet stars would disqualify Proxima Cen b and leave Ross 128 b as the best temperate planet known to date."

Ross 128 b's red dwarf star, Ross 128, is particularly quiet, experts say. Other red dwarfs "are subject to flares that occasionally bathe their orbiting planets in deadly ultraviolet and X-ray radiation," according to a press release from the European Southern Observatory.

"However, it seems that Ross 128 is a much quieter star, and so its planets may be the closest known comfortable abode for possible life," it added.

Eleven light-years away from Earth, Ross 128 b is the second closest exoplanet to our solar system, next to only Proxima b. According to the press release, Ross 128 b is "also the closest planet to be discovered orbiting an inactive red dwarf star, which may increase the likelihood that this planet could potentially sustain life."

A light year, which is a measurement of distance in space, is equal to 6 trillion miles. Proxima b is about 4 light-years from Earth.

Astronomers have also discovered that Ross 128 b is roughly the same size as Earth and may have a similar temperature on its surface, though more observation is needed. It also orbits its host star (a red dwarf) every 9.9 days.

"Only HARPS has demonstrated such a precision and it remains the best planet hunter of its kind, 15 years after it began operations,” said University of Geneva, Switzerland astronomer Nicola Astudillo-Defru, who co-authored the study.

Despite Ross 128 and Ross 128 b's distance from Earth, it is moving toward us and is expected to surpass Proxima b and become our closest stellar neighbor in 79,000 years.

More exoplanets are being discovered by astronomers thanks in part to tools like HARPS and ESO's Extremely Large Telescope.

“New facilities at ESO will first play a critical role in building the census of Earth-mass planets amenable to characterisation," said Xavier Bonfils, one of the co-authors of the study.

More observation on Ross 128 b is needed to know whether there is water present (one of the building blocks of life), but it is close enough to Ross 128 that it could have the prerequisite warmth for water to exist.