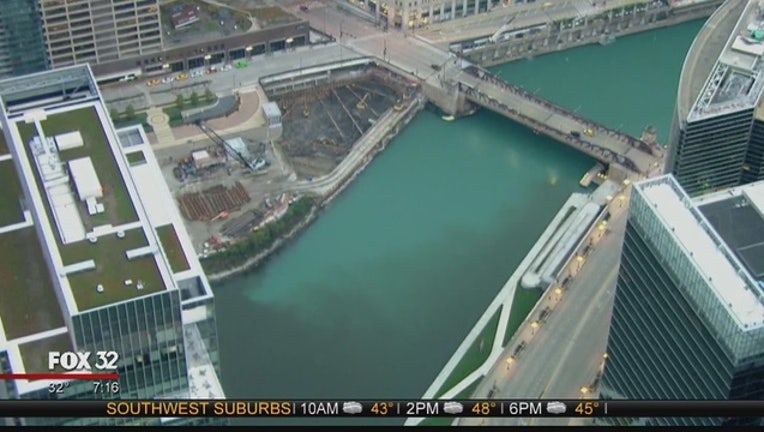 Two distinct colors of water have been spotted at Wolf Point since Friday — separated by a prominent demarcation line — and still refused to mingle on Monday, the Chicago Sun-Times is reporting.

The normally dark, muddy color of the north and south branches of the river stand in stark comparison to the vibrant teal more reminiscent of the green hue pumped in for the city’s annual St. Patrick’s Day river dyeing, or the waters of Canada’s Lake Louise.

The reason for the oil-and-vinegar effect, according to folks from two government agencies who monitor the waterway, can be traced back to rainwater that fell several days last week.

Rain flowing down the muddy banks of the rivers north and south branches created a murky brew.

Or, if you like your explanations in more scientific terms: “Suspended solids are more prominent in high flow situations when it rains,” according to Allison Fore, a spokeswoman for the Metropolitan Water Reclamation District of Greater Chicago.

The reason why the water is greener and less murky east of Wolf Point is because the riverbanks are concrete, not mud, between Lake Michigan and where the river splits north and south at Wolf Point.

“At this time we believe this accounts for the difference in visible water color; however, we are continuing to look for other reasons for the discoloration,” Fore told the Sun-Times. “To this point we have no indication of any problems with the waterway system.”

Fore added that colder water from Lake Michigan is in the waterway east of Wolf Point. The colder water is more dense and is pushing the warmer river water along with sediments to the surface in some locations, she said.

It’s also worth noting that on Saturday, because of rainstorms, sewage was released into the river at several points both north and south of Wolf Point, adding to the murky mixture.

The unpleasant water management measure of releasing sewage into the river is deployed during heavy rains to relieve sewers that otherwise might become overwhelmed and back up into the basements of homeowners.

About half an inch of rain was recorded at O’Hare Airport on Saturday, with more falling Sunday, according to the National Weather Service.

The Chicago area received about a quarter of an inch of rain on Wednesday.

The river’s quirky coloring capped off a troubling week for the city’s iconic waterway. Crews are still trying to locate the source of an oil spill that slicked the Bubbly Creek portion of the river on the South Side on Oct. 26.

Heavy rainfall can cause a lot of trouble for the river. Just last month, the river overflowed onto its scenic walkways after a persistent rainstorm, causing police to tape off several entryways from Franklin Street east to the lake.