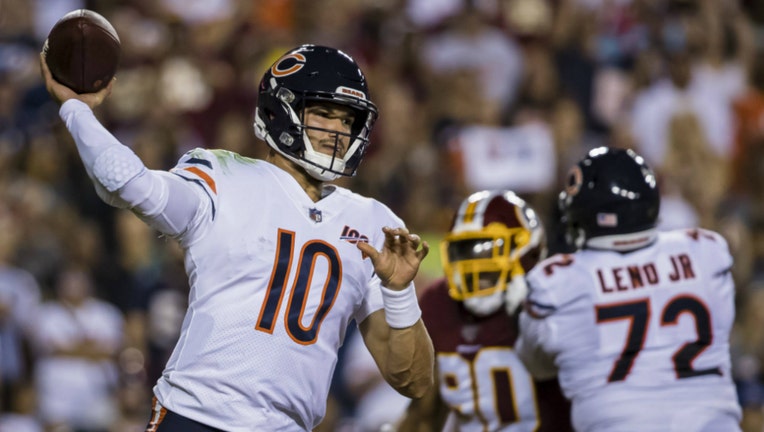 SEPTEMBER 23: Mitchell Trubisky #10 of the Chicago Bears looks to pass against the Washington Redskins during the first half at FedExField on September 23, 2019 in Landover, Maryland. (Photo by Scott Taetsch/Getty Images)

LAKE FOREST - The Chicago Bears are cautiously optimistic quarterback Mitchell Trubisky will return this week from a left shoulder injury.

Trubisky said he feels "close" to 100 percent and hopes to start when the Bears host the New Orleans Saints on Sunday.

"We've done a good job with this rehab plan of getting on the same page and just communicating, and hopefully once I show everyone that I'm good to go in practice this week, they'll let me roll and not look back," he said Wednesday.

Trubisky said he would have to wear a shoulder harness for the team to let him play. If he is unable to convince the trainers and coaches he is ready, veteran Chase Daniel will make his second straight start.

"I always say 'cautiously optimistic,'" coach Matt Nagy said. "I feel good about it but we're preparing with both right now. The thing with Chase is that we know he's been in this role before. If it ends up being him, then it's the same mojo."

Trubisky - the No. 2 overall pick in the 2017 draft - was hurt scrambling on the opening drive in the win over Minnesota on Sept. 29. The Vikings' Danielle Hunter dragged him down, and the quarterback's arm got pinned under his body.

Trubisky initially thought he might be able to return to the game, despite the pain, because the injury was to his non-throwing shoulder. He had it popped back in. But the Bears weren't about to let him go back on the field. The question then became how much time he would miss.

Daniel finished that game and started the loss to Oakland in London the following week. The Bears (3-2) then had a bye.

Trubisky missed two games late last season because of an injured right shoulder. Had this one also been to his passing arm, he said he probably wouldn't be eyeing a return this week. But he feels "pretty good" when he throws.

"It came back really quickly so I'm pleased about the progress we've made, a lot of credit to the training staff in just getting that recovery and thank God it recovered quickly," he said.

Trubisky started throwing in practice on Monday and was a full participant on Wednesday. Nagy said he and Daniel would share reps this week.

Trubisky's return could help spark an offense that hasn't produced the way the Bears envisioned in Nagy's second season.

Chicago ranks 30th in both yards per game and in scoring as well as 26th in rushing.

A Pro Bowl pick last season, Trubisky has completed 69 of 106 passes for 588 yards with three touchdowns and two interceptions in four games.

All three TDs came in an easy win over Washington on Sept. 23, after he struggled in a season-opening loss to Green Bay and a tight victory at Denver.

After getting knocked out of the game against Minnesota, Trubisky hopes he can build on that strong showing he had at Washington.

"It's definitely frustrating, but you just go back to how I prepared mentally to go into that Washington game and try to get right back on with that mindset and come out here and practice with the guys and fly around and just go out there and do my job," he said. "It is a big part of the mental game, and you've just got to prepare mentally to go out there and do your job and be in the right mindset to make plays for your team."

Whether Trubisky or Daniel starts against New Orleans, the Bears will need better blocking from a line that will be without right guard Kyle Long for the rest of the season. The three-time Pro Bowl pick was placed on injured reserve Monday for the fourth year in a row, this time because of a hip problem.

Veteran Ted Larsen could start at right guard after missing the previous game with a knee injury. Rashaad Coward and rookie Alex Bars, who was promoted Monday from the practice squad, also are options.

NOTES: Nagy said he doesn't think Pro Bowl DT Akiem Hicks (elbow) will need surgery. The Bears could bring Hicks back in eight weeks after placing him on IR on Tuesday.