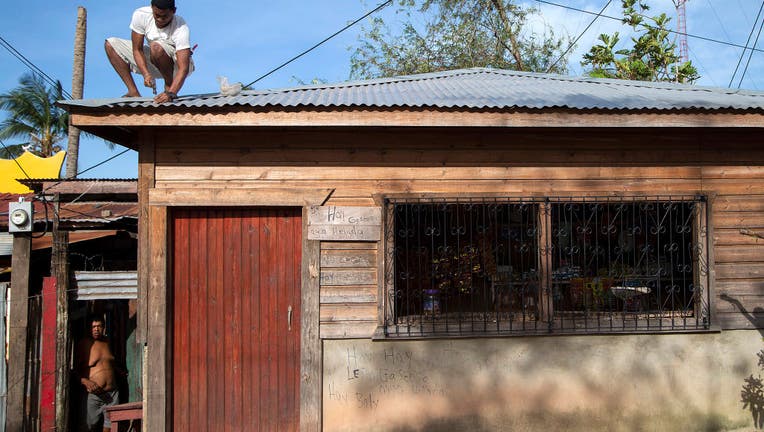 FILE - A man reinforces the roof of his house before the arrival of hurricane Iota on November 15, 2020 in Puerto Cabezas, Nicaragua. (Maynor Valenzuela/Getty Images)

Nicaragua's government said authorities had begun evacuating some people near the country's border with Honduras, an area that forecasts said likely would be in Iota's path.

Iota became a Category 2 hurricane late Sunday afternoon, and the U.S. National Hurricane Center warned it would likely be an extremely dangerous Category 4 storm when it approached the Central America mainland late Monday.

It was already a record-breaking system, being the 30th named storm of this year’s extraordinarily busy Atlantic hurricane season. Such activity has focused attention on climate change, which scientists say is causing wetter, stronger and more destructive storms.

RELATED: Iota strengthens into hurricane; 13th of the Atlantic season

The hurricane center said Iota had maximum sustained winds of 100 mph (155 kph) early Sunday evening. It was centered about 110 miles (175 kilometers) east of Isla de Providencia, Colombia, and was moving westward at 9 mph (15 kph). Forecasters said Iota was expected to pass or cross over Providencia late Sunday or early Monday and then approach the coasts of Nicaragua and Honduras on Monday night.

By Sunday evening, Nicaraguan officials said about 1.500 people had, nearly half of them children, been evacuated from low-lying areas in the country's northeast, including all the inhabitants of Cayo Misquitos. Authorities said 83.000 people in that region were in danger.

Iota threatened to wreak more havoc in a region where people are still grappling with the aftermath of Eta. That system hit Nicaragua just over a week ago as a Category 4 hurricane, killing at least 120 people as torrential rains caused flash floods and mudslides in parts of Central America and Mexico. Then it meandered across Cuba, the Florida Keys and around the Gulf of Mexico before slogging ashore again near Cedar Key, Florida, and dashing across Florida and the Carolinas.

Iota was forecast to bring up to 30 inches (750 millimeters) of rain from northeast Nicaragua into northern Honduras, while Costa Rica, Panama and El Salvador could also experience heavy rain and possible flooding, the hurricane center said. That raised fears of more landslides and flooding.

Eta was the 28th named storm of this year’s hurricane season, tying the 2005 record for named storms. Theta, the 29th, was far out in the eastern Atlantic Ocean, and became a remnant low Sunday.

The official end of hurricane season is Nov. 30.