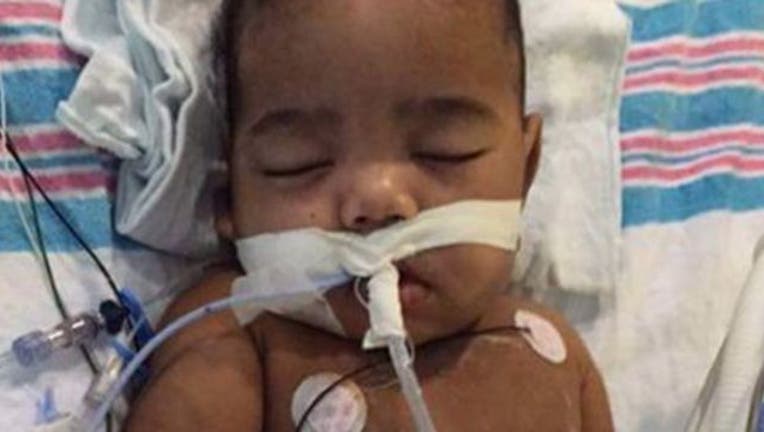 Anthony Dickerson Jr. was born without either kidney, and was set to receive his father's left organ until he violated his parole. (GoFundMe)

FOX NEWS - A 2-year-old boy who has been suffering from kidney issues since birth will have to wait a few more months for a transplant after his dad, who was found to be a perfect match, violated terms of his probation. The surgery was scheduled to take place on Oct. 3, but Emory University Hospital informed the family about a change of plans after Anthony Dickerson’s latest arrest, AJC.com reported.

Anthony Dickerson Jr. was born without kidneys, and was due to receive his father’s left organ. Last month, he allegedly suffered a stroke and now requires constant care, WTSP reported.

"They’re making this about his dad,” Carmellia Burgess, Anthony Dickerson Jr.’s mother, told the news outlet. “It’s not about dad. It’s about our son.”

Dickerson, 26, was first arrested in 2011 on misdemeanor theft charges and a first-degree forgery charge, AJC.com reported. He was arrested for violating his probation in September and charged with possession of a firearm. While jailed, the hospital allegedly wrote on his behalf to request he be escorted to Emory for blood work and pre-operative testing.

“Mr. Dickerson is currently in custody for a parole violation,” the alleged letter stated. “If Mr. Dickerson could be escorted to Emory for blood work and a pre-operative appointment tomorrow, September 29, we will be able to continue with the scheduled surgery.”

However, after Dickerson was released days after testing, Burgess said she received a second letter from Emory informing the family that the surgery would be delayed until Dickerson complied with his parole officer after three months.