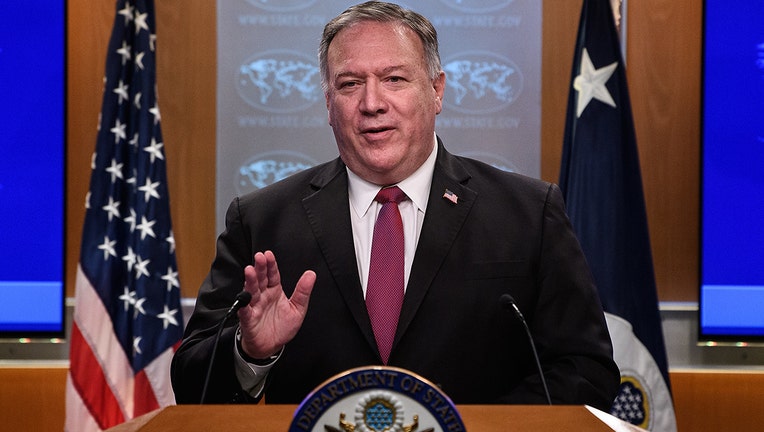 US Secretary of State Mike Pompeo speaks at a press conference at the State Department in Washington, DC, on October 21, 2020.

LOS ANGELES - The United States joined Brazil, Egypt, Hungary, Indonesia and Uganda as co-sponsors on an anti-abortion declaration on Thursday.

The Geneva Consensus Declaration was signed by some 31 United Nations members to build a coalition around the issue of defending life and where nations stand on women’s health.

Secretary of State Mike Pompeo and Health and Human Services Secretary Alex M. Azar participated in the virtual signing ceremony of the declaration.

“Today, we’re taking the next step, as we sign the Geneva Consensus Declaration. At its very core, the declaration protects women’s health, defends the unborn, and reiterates the vital importance of the family as the foundation of society,” Pompeo said in the press briefing.

“We will unequivocally declare that there is no international right to abortion. We will proudly put women’s health first at every stage of life,” Sec. Alex Azar said. “Without apology, we affirm that governments have the sovereign right to make their own laws to protect innocent life and write their regulations on abortion. The stakes are too high to permit radical, divisive agendas to hinder the ability of women in countries at all stages of development to attain better health.”

Azar stated that Thursday’s declaration will not be the last chance for nations to sign the document and invited other countries to join this effort in the coming months and years.

“I hope you will also join us next year for the Global Women’s Health Summit, where we will forge a new path forward to improve the lives of women across the globe,” Azar said.

Pompeo called this a historic event, as the first multilateral coalition built around the issue of defending life.

“Perhaps most importantly, the declaration reaffirms ‘the inherent dignity and worth’ of every human being by emphasizing that every human being has the fundamental right to human life. Indeed, this is what the American founders knew so clearly. It’s what we’re upholding here today, that legacy," Pompeo said.

On Thursday, Amnesty International called on the Department of Health and Human Services not to implement the provisions of the declaration.

“Today’s news marks another giant step backwards for the United States as it joins a list of countries willingly endangering people’s health and lives. The United States’ stance flies in the face of human rights and decades of health research,” Tarah Demant, the Director of the Gender, Sexuality, and Identity program at Amnesty International USA said. “Every woman, girl or person who can become pregnant has the human right to abortion. Full stop. This is about people living full lives that are their own – not the lives that the government has prescribed for them.

This declaration comes, as the United States moves to approve Amy Coney Barrett to the Supreme Court, a federal appeals court judge with deeply held religious beliefs. Barrett has faced criticism by Democrats, Planned Parenthood and women’s groups who argue her nomination is a threat to women's reproductive rights.

Sen. Dianne Feinstein pressed Supreme Court nominee Amy Coney Barrett on whether she agrees with the late Justice Scalia that Roe v. Wade should be overturned.

During Senate confirmation hearings earlier this month, Barrett vowed to approach each case with an “open mind” and said she would bring no personal agenda to the high court.

She has remained neutral on many issues, asserting it's against judicial code at this point to say how she would vote on politically fraught issues, including abortion.