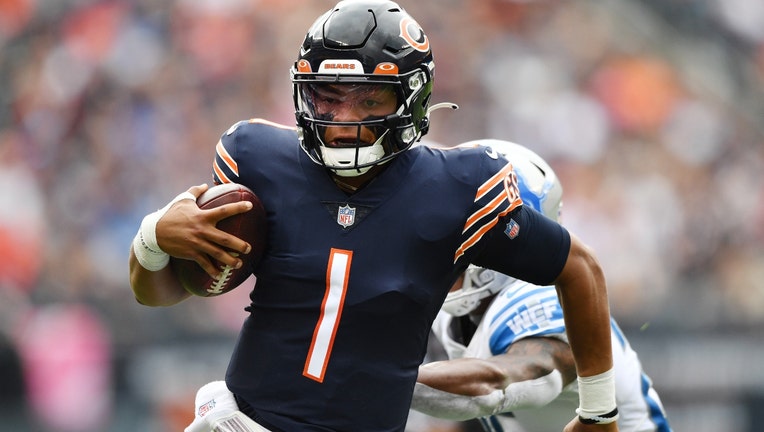 Quarterback Justin Fields of the Chicago Bears runs with the ball against the Detroit Lions in the first half at Soldier Field on October 03, 2021 in Chicago, Illinois. (Jamie Sabau/Getty Images / Getty Images)

CHICAGO - Chicago Bears quarterback Justin Fields was feeling good enough to practice Wednesday after missing a game because of an ankle injury.

Whether the rookie will be ready to start when the New York Giants visit Soldier Field on Sunday was unclear. The Bears will monitor how he feels before deciding whether they will go with Fields, backup Andy Dalton or Nick Foles.

"Getting those reps has been really good for him, which I think is great. He’s grown in a lot of different ways. Every rep he can get at this point, with how it has gone on in this season will be valuable for him for the rest of his career."

Fields did not play in the win at Seattle after hurting himself in a Monday night loss to Minnesota in Week 15. With Dalton sidelined because of a groin injury, Foles led the Bears (5-10) to a 25-24 comeback victory over the Seahawks. The Super Bowl 52 MVP threw for 250 yards and a touchdown to Jimmy Graham with about a minute remaining that led to a winning 2-point conversion pass to Damiere Byrd.

Though the Bears had all three quarterbacks available Wednesday, Foles was the only one not coming back from an injury. Fields was limited and Dalton was a full participant.

"We’re always going to put the person’s health No. 1 and then we kind of go from there," Nagy said.

The Bears would obviously like to have Fields starting. But they also have to balance that against their long-term needs. And the last thing they would want is a more serious injury that could stunt his growth.

After all, Fields’ development figures to go a long way toward determining whether Chicago can develop into a consistent winner. General manager Ryan Pace banked on it when he traded up nine spots with the Giants to grab the former Ohio State star with the No. 11 pick in the draft.

The results so far have been mixed.

Fields has displayed the arm and speed and poise at times that have the Bears thinking big things could be in store for him. But his inexperience also shows.

Fields’ completion rate (58.9 percent) and passer rating (73.2) are pedestrian. He has more interceptions (10) than touchdowns (seven).

But Fields also strung together several promising outings before cracking his ribs against Baltimore in Week 11. He missed the next two games before an inconsistent outing in the loss at Green Bay on Dec. 12, then hurt his ankle against Minnesota and did not practice last Thursday and Friday.

"I want him out there," receiver Darnell Mooney said. "But I also want him to be healthy as well. If he’s not healthy, I don’t want him going out there injuring himself, just trying to fight through it and play through it when he’s not 100% or at least 90%."

Nagy said Fields is "definitely getting better" and did "everything he could" to suit up last week. The fact that the Bears had little to play for did not factor into the decision.

"This week will be a true test as well as to the significance of the pain, where he’s at medically and then where we’re at as far as for him being able to get the practice reps," Nagy said. "You just kind of combine all three of those together."