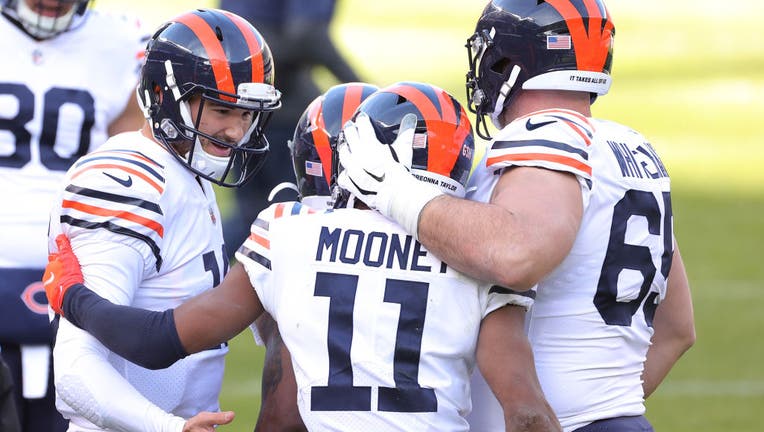 CHICAGO, ILLINOIS - DECEMBER 13: Chicago Bears wide receiver Darnell Mooney #11 is congratulated by teammates Mitchell Trubisky #10 and Cody Whitehair #65 after scoring a touchdown against the Houston Texans during the second quarter at Soldier Field

CHICAGO - All Mitchell Trubisky cared about was helping the Chicago Bears get back to winning. He insisted the other story that got most of the attention during the week wasn’t on his mind.

Trubisky threw three touchdown passes to outplay Deshaun Watson in their first meeting since they entered the NFL, and the Bears snapped a six-game losing streak with a 36-7 victory over the Houston Texans on Sunday.

David Montgomery ran for an 80-yard touchdown on Chicago’s first play from scrimmage, helping the Bears stop their worst skid since the 2002 team dropped eight in a row to match a franchise record. Chicago (6-7) sacked Watson seven times, including a safety by Khalil Mack, to tie a career high for the Texans quarterback.

General manager Ryan Pace’s decision to draft Trubisky with the No. 2 overall pick in 2017 when he could have gone with Watson or Patrick Mahomes drew even more buzz than usual during the week. But on Sunday, Chicago’s quarterback delivered.

“I was just so focused on what I needed to do for my team that it really allowed me to block everything out,” Trubisky said. “Just the situation that we were in, being on that little losing streak, that makes you sick to your stomach. I was willing to do whatever it took for the team today, just go out there and get a win. ... It was just easy to block out because I knew what I was focused on doing today.”

Trubisky buried the Texans (4-9) in the first half, throwing for three TDs as the Bears grabbed a 30-7 lead.

Facing one of the NFL’s worst defenses, he completed 24 of 33 passes for 267 yards. He posted a 126.7 rating in his third start since returning to the lineup with Nick Foles (hip and glute) injured.

Montgomery tied the fourth-longest run in franchise history and finished with a season-high 113 yards on 11 carries.

Allen Robinson caught nine passes for 123 yards, matching a season high and giving him 1,027 for the season. It’s the second straight year he has reached 1,000 yards.

Mack went four games without a sack before he got Watson for a safety in the second quarter. He also recovered a fumble by Duke Johnson in the first period and deflected a pass in the second.

Roquan Smith had two sacks. And the Monsters of the Midway came away with their first win since they beat Carolina in Week 6.

“It’s just a start,” coach Matt Nagy said. “It’s been a while. But when you go through moments like this, you stay resilient and you stay persistent and you trust in one another. That’s what we’ve done.”

For the Texans, it was a rough afternoon.

“I agree,” he said after the Texans were mathematically eliminated from playoff contention.

The NFL’s second-leading passer behind Mahomes, Watson was 21 of 30 for 219 yards after three straight games with more than 300.

Watson exited for a play after he was hit by Smith and Mack, throwing an incomplete pass on a third down near the goal line late in the third. AJ McCarron got sacked, ending that threat. Watson returned on the next drive.

Montgomery wasted no time giving the Bears a lead when he broke through the line and burst up the left side. It matched Chicago’s longest run of the Super Bowl era, with Neal Anderson going for 80 yards against Green Bay on Nov. 27, 1988.

“Just being able to have that line move and push the way they did and create that amazing hole, it’s crazy,” he said. “I just seen it and I hit it. I had Allen Robinson blocking on the outside. If it hadn’t been for him, I probably would have gotten caught.”

Trubisky made it 14-0 early in the second quarter with a 5-yard touchdown to Jimmy Graham. But the Texans quickly answered. A 48-yard reception by Johnson set up Watson’s 5-yard pass to Keke Coutee, making it a seven-point game.

Mack followed a 10-yard sack by Bilal Nichols by taking down Watson for a safety. The Bears went 66 yards on the next drive, with Darnell Mooney scoring from the 12 on a swing pass to make it 23-7 with 3:22 remaining in the half.

Trubisky added a 3-yard TD to Robinson in double coverage in the closing seconds, sending Chicago to the locker room with a 23-point lead

Texans: S Justin Reid hurt his hand in the first half, and DT Brandon Dunn (hip) was injured in the fourth quarter. ... WR Brandin Cooks was inactive because of foot and neck injuries, sidelining one of Watson’s top targets.

Texans: Play at Indianapolis next Sunday.