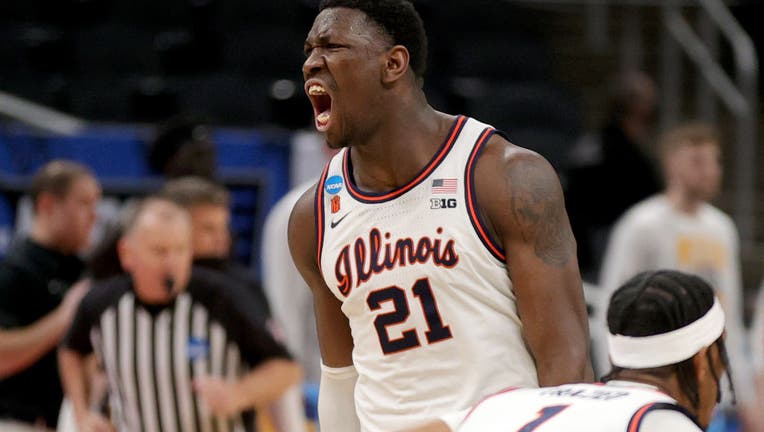 INDIANAPOLIS, INDIANA - MARCH 21: Kofi Cockburn #21 of the Illinois Fighting Illini reacts to a basket against the Loyola Chicago Ramblers during the first half in the second round game of the 2021 NCAA Men's Basketball Tournament at Bankers Life Fie

Cockburn shared on Instagram a racist social media post directed at him after the top-seeded Illini lost to No. 8 Loyola Chicago on Sunday.

Cockburn, who was born in Jamaica but later moved to New York, posted a screenshot of the post and responded by writing: "I blame his parents."

Cockburn’s post came a day after Ohio State’s E.J. Liddell received threatening and insulting social media messages following the second-seeded Buckeyes’ loss to No. 15 seed Oral Roberts. He posted images of the messages, including one that said "I hope you die I really do." Other messages included racist insults.

"Honestly, what did I do to deserve this?" Liddell posted on Twitter. "I’m human."

Ohio State has contacted police about the language directed at Liddell.

An school spokesman said Illinois is still gathering information before deciding whether to involve law enforcement.

The Big Ten and Big 12 were supposed to be the power conferences of this year’s NCAA Tournament.

Most of their teams didn’t make it past the second round.

The Big Ten, which led all conferences with nine teams in the bracket, started losing early and never really stopped.

Ohio State, Michigan State and Purdue all lost their initial games. Wisconsin, Rutgers, Iowa and Illinois lost after winning their openers. The Illini became the first No. 1 seed to be eliminated when they fell to Loyola Chicago.

Michigan at least lived up to its No. 1 seed, beating LSU to reach the Sweet 16. Maryland played in Monday’s late game.

The Big 12, which had seven teams make the bracket, has fared slightly better.

Baylor, the No. 1 seed in the South Region, has looked strong and is headed to the Sweet 16. Texas Tech, Oklahoma, Oklahoma State and West Virginia each won their first games, but were gone after the second round.

By far the best conference through the first two rounds was the Pac-12.

Picked on for supposedly being weak, Pac-12 teams have been kings of the bracket so far. Oregon beat Iowa on Monday to reach the Sweet 16, giving the league wins in its first nine games. Those included the Ducks’ first-round walkover against VCU, which couldn’t play because of a COVID-19 outbreak.

Oregon State, the surprising Pac-12 Tournament winner, and UCLA also are through to the Sweet 16. The Pac-12′s perfect run ended when Colorado lost to Florida State, and Southern Cal played later Monday.

"I feel like we don’t get the respect that we deserve. It looks good on our conference," Oregon guard Chris Duarte said. "It tells you guys that our conference, we have talent, and we are really good."

The NCAA Tournament lost one of its biggest names and best players with Iowa’s loss.

Two-time All-American Luka Garza closed out his stellar career with the Hawkeyes in impressive fashion, tying the school NCAA Tournament record with 36 points on 14-of-20 shooting. He is the first player since Oklahoma’s Blake Griffin in 2009 to hit 70% of his shots with at least 20 attempts in an NCAA Tournament game.

Garza is a front-runner to win all the major postseason awards and moves on to preparing for an NBA career. He leaves Iowa as the seventh-leading scorer in Big Ten history at 2,306 points.

The 6-foot-11 senior got emotional after he left the floor in Indianapolis after his final game, wiping tears as he hugged teammates and coach Fran McCaffery on his way to the bench for the last time.

"I have been truly blessed to have had the opportunity to have Luka be on our basketball team for the last four years," McCaffery said. "His leadership, his work ethic, his determination, his example for the young players, his consistency of effort and performance — we may never see another one like him."

The leader of an organization that advocates for fairness in the treatment of college athletics has requested that NCAA President Mark Emmert meet via videoconference Tuesday with basketball players who launched the #NotNCAAProperty movement.

Ramogi Huma, executive director of the National College Players Association, wrote in a letter to Emmert that he and the players leading the movement want to discuss "the NCAA’s prohibition on college athlete compensation for use of their name, image and likeness as well as the unacceptable discriminatory treatment of female athletes in the NCAA March Madness Tournament and throughout NCAA member institutions."

Jordan Bohannon of Iowa, Isaiah Livers of Michigan and Geo Baker of Rutgers helped start the movement. The hashtag #NotNCAAProperty was trending on social media.

"It’s really important what we did, to continue to create awareness," Bohannon said. "You saw from the women’s standpoint, a couple days ago, the women speaking out about the weight room being different. If you look at that, that was just absolutely ridiculous. Look at Mark Emmert, he was nowhere to be found to answer any questions. ... At the end of the day, a leader’s got to step up and lead and he wasn’t there again to state his reasoning behind it all."

The NCAA said in a statement Sunday that Emmert "would be happy to connect either virtually or in person when appropriate with any student-athletes who want to engage."