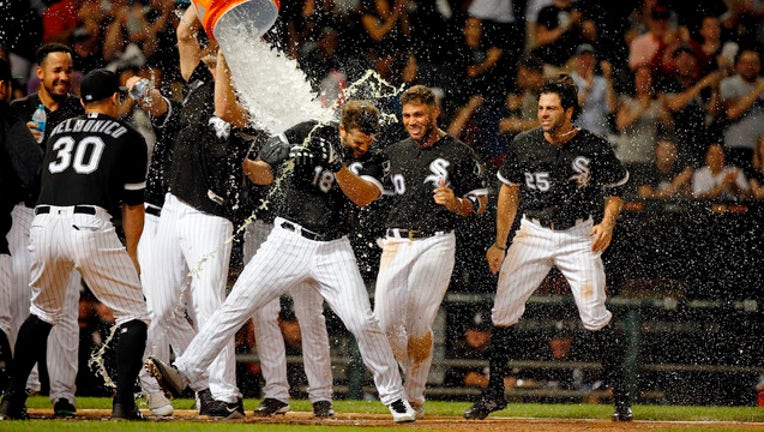 Palka led off the ninth inning with a home run, Carlos Rodon matched a career high by throwing eight innings of scoreless four-hit ball and the Chicago White Sox beat the Cleveland Indians 1-0 on Friday night.

Palka launched a 1-2 pitch from Neil Ramirez (0-2) six rows up into the left field seats for his 18th homer to end Chicago's three-game losing streak. His game-ending shot came on a high fastball after Palka was called out on strikes twice and fanned once.

"When your night's going like that, I feel like it's just a lack of focus when it happens," Palka said. "You've just got to lock it back in and keep on rolling."

It didn't hurt that Ramirez grooved a 96 mph pitch.

"They were getting me on some bad pitches to hit down, whether it was heaters or breaking balls early in the game," Palka said "I just wanted something up in the zone."

Rodon and Cleveland rookie Shane Bieber tossed crisp scoreless ball deep into the game. Each was relieved after 106 pitches.

Rodon was sharp for a sixth straight start and has a 1.27 ERA in the span. The left-hander struck out five and walked two - both in the first and the only time Rodon allowed two baserunners in an inning - before being replaced by Xavier Cedeno to start the ninth.

The hardest-hit balls off Rodon were doubles by Francisco Lindor in the third and Jose Ramirez in the sixth.

"I feel pretty good," Rodon said. "I might not have all my stuff, but it's working."

"Just the confidence is there," Rodon said "There's no doubt in your mind when you go out and I step on the mound that I'm healthy and I'm coming to compete."

Bieber matched Rodon through 6 2/3 innings, yielding only three hits - including two doubles - while striking out eight and walking two in this first career start against the White Sox. The 23-year-old right-hander was replaced with two outs in the seventh by Oliver Perez.

"It's been nice, just another outing try to build off on," Bieber said "There is a lot of room for improvement always, just to kind of feel my feet under me and try to build momentum has been nice.

The White Sox managed two baserunners only once against Bieber, in the second with two outs.

"He's been so good in his career early on and in the minor leagues," manager Terry Francona said. "He really hasn't gotten up over 100 (pitches) very often. So today's another step for him."

Yoan Moncada lined a double to the right-center wall to lead off the fifth, but didn't advance as Bieber struck out Ryan LaMarre and Nicky Delmonico before getting Yolmer Sanchez to fly out.

The White Sox used three relievers as they escaped a Cleveland threat in the ninth.

Cedeno walked Melky Cabrera to lead off, then Juan Minaya got Brandon Guyer to ground into a force at second. Yonder Alonso greeted Jace Fry with a single, but Fry struck out Jan Gomes and got Jason Kipnis to pop out.

Indians: DH Edwin Encarnacion left the game in the third with left biceps discomfort and was replaced by Cabrera. He'll be examined on Saturday. .. Francona had no update on OF Leonys Martin, who was placed on the 10-disabled list on Thursday with an unspecified illness that's not baseball-related. Francona, however, hinted Martin's condition could be serious. "What I would say, if you are into saying prayers and things like that, keep him in your thoughts," Francona said. "He's at the (Cleveland) Clinic and getting good care." ... RHP Josh Tomlin (strained right hamstring) and RHP Nick Goody (right elbow inflammation) threw bullpen sessions in Cleveland on Friday. Tomlin is expected to throw a rehab start at Triple-A Columbus on Monday and Goody will head to the Arizona League for a rehab assignment.

White Sox: Manager Rick Renteria said the team will know in the next couple of day if INF/OF Leury Garcia (left hamstring strain) will need a rehab stint. Garcia was injured on Sunday at Tampa Bay.