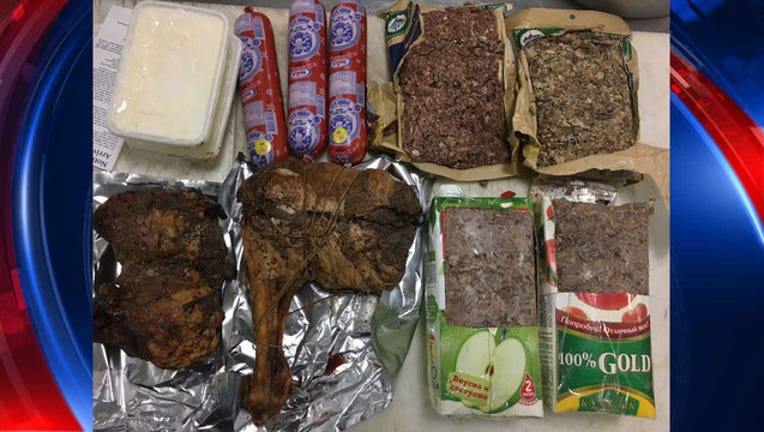 DULLES, Va. - U.S. Customs and Border Protection agriculture specialists have confiscated many unusual things over the years, including, but not limited to charred monkeys, cocaine hidden inside the cavity of fully cooked chickens and giant African land snails at Washington Dulles International Airport.

On January 29, they were able to add horse genitals and horsemeat to that list.

They discovered 42 pounds of horsemeat concealed inside juice boxes, including 13 pounds of horse genitals in the possession of two women traveling from Mongolia.

One of the two women traveling from Mongolia, claimed the items were for medicinal purposes. Officials also found three liters of yak milk.

Horse meat is not allowed to enter the United States if it is not accompanied by an official government horse meat certification from the country or government it originates.

"Customs and Border Protection takes no pleasure in seizing and destroying travelers' food products," said Wayne Biondi, CBP Port Director for the Area Port of Washington Dulles. "We're in the business of protecting America's agriculture industries, like the livestock industry, from the potential introduction of animal diseases posed by these unpermitted food products."

The food products were incinerated. The two women were released and were not criminally charged.

U.S. Customs and Border Protection encourages all travelers to learn what they can and cannot bring into the United States at CBP’s Travel website.