WINSTON-SALEM, N.C. - Poet Oscar Wilde once said, "Imitation is the sincerest form of flattery," - and that’s exactly what 5-year-old Harrison Streetman had in mind when he dressed as Bernie Sanders for a school party.

Harrison dressed up as the senator for the 100th Day celebration at Pinebrook Elementary in North Carolina. He chose Sanders' outfit from President Joe Biden's inauguration that went viral, generating countless memes.

"Yeah, I know who he is," Harrison told FOX Television Stations Sunday.

"His teacher encouraged them [students] to dress up as 100-year-old people, and so, then the idea of just dressing up as an old person was kind of going through our heads," Harrison’s mother, Amanda, said. "And the ‘Bernie meme’ was so popular."

Harrison donned the dark coat, the glasses, and yes, the signature mittens that took an identity of their own and sparked a fashion trend. He even posed like Sanders, sitting socially-distant in a chair with his legs crossed and arms folded mimicking the now-viral picture. 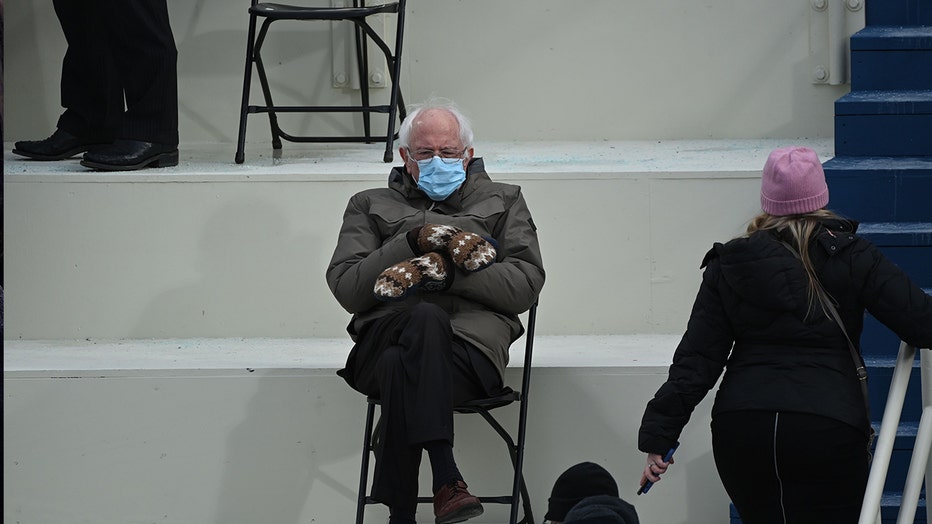 FILE - Former presidential candidate, Senator Bernie Sanders (D-Vermont) sits in the bleachers on Capitol Hill before Joe Biden is sworn in as the 46th US President on Jan. 20, 2021, at the US Capitol in Washington, DC. (BRENDAN SMIALOWSKI/AFP via Getty Images)

Harrison’s picture is starting to pick up attention on social media.

"It felt good," Harrison said when asked how he felt about dressing up as Sanders. "It was cool but now life is much better that I feel that I just made my mom some news."

His mother, who’s a teacher herself, put the costume together for her son - even sewing the nearly-identical mittens.

The mittens became such a social media sensation that the winter clothing item already has its own Twitter account.

According to Vermont newspaper Seven Days, Jen Ellis, a teacher from Essex Junction, made the famous mittens for Sanders. "She used repurposed wool from sweaters and lined them with fleece. She generally sells mittens at craft fairs or gives them to friends. Sanders' daughter-in-law, Liza Driscoll, runs Ellis' daughter's daycare, so one holiday season, Ellis made mittens for all the teachers — plus Bernie," Seven Days wrote.

Since the meme took off, Sanders took to Facebook to address the attention.

"In Vermont, we know something about the cold. And we’re not so concerned about good fashion," he wrote.

The Vermont senator’s team also rolled out a sweatshirt of the meme, with 100% of the proceeds going to Meals on Wheels Vermont