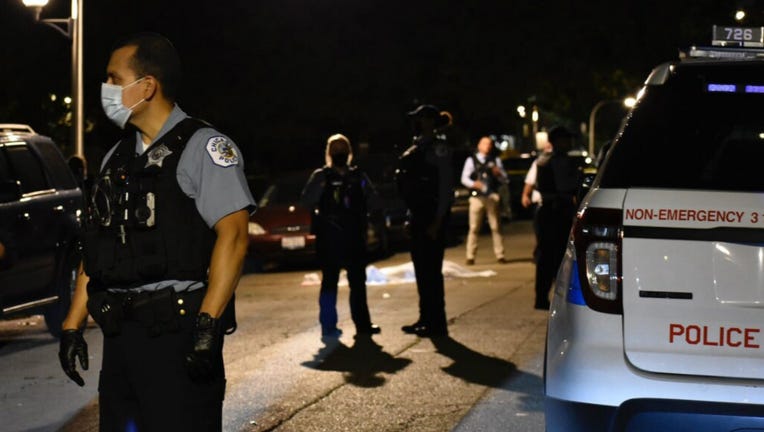 Chicago police investigate after a man was found shot to death Sept. 12, 2020, in the 6200 block of South Seeley Avenue.

CHICAGO - Fifty-four people people were shot, 12 of them fatally, this weekend in Chicago.

The weekend was deadlier than last week’s Labor Day weekend, when eight people were killed and 48 others hurt over three days.

This weekend’s homicide victims were between 27 and 86 years old, authorities said. The youngest person wounded was 17 years old.

At least seven people were fatally shot Saturday, while four people were killed Sunday and one person was killed before 5 a.m. Monday. Three of the fatalities were women.

The latest fatal shooting happened about 12:45 a.m. Monday in Uptown. A man, 27, got into a vehicle in the 1200 block of West Leland Avenue and someone in a dark-colored vehicle shot him in the chest, neck and abdomen, Chicago police said.

He was pronounced dead on the scene, police said. The Cook County medical examiner’s office hasn’t released his name.

About 11:30 p.m. Sunday, two people were shot, one fatally, in Garfield Park on the West Side. A 28-year-old woman and 26-year-old man were sitting in a vehicle in the 200 block of North Pulaski Road when someone on foot fired shots, police said.

The woman was struck in the back and was taken to Stroger Hospital where she was pronounced dead, police said. Her name has not been released. The man was taken to the same hospital in critical condition with a gunshot wound to his abdomen, police said.

Sunday afternoon, a man was killed and three people wounded in Englewood on the South Side. Just before 4 p.m., a group was on a porch in the 6100 block of South Throop Street when two people got out of a passing vehicle and opened fire, police said.

A 35-year-old man was struck in the head and taken to Stroger Hospital, where he died, police said. The medical examiner’s office has not identified him.

A 17-year-old boy was shot in the hip and taken to the University of Chicago Medical Center, while a 60-year-old man who was grazed in the back went to Holy Cross Hospital, police said. A woman, 26, went to St. Bernard Hospital with a gunshot wound to her hand. All three of the wounded were in good condition, police said.

Early Sunday, a man was found shot to death in Woodlawn on the South Side. He was found outside about 12:10 a.m. in the 6100 block of South Rhodes Avenue with gunshot wounds to the torso, police said. Jeremy Akons of Woodlawn was pronounced dead on the scene, officials said.

On Saturday night, two men were shot, one fatally, in the East Side neighborhood. Officers responded to a ShotSpotter alert about 11:05 p.m. and found two men unresponsive with gunshot wounds outside a home in the 10600 block of South Mackinaw Avenue, police said. Juan Gomez Torrez, 43, was shot in the head and chest pronounced dead on the scene, officials said.

Another man, 39, was struck in the torso and was taken to the University of Chicago Medical Center in critical condition, police said.

About the same time Saturday night, a 33-year-old woman was fatally shot in Austin on the West Side. She was found unresponsive with a gunshot wound to the head about 11:05 p.m. in the 500 block of North Pine Avenue, police said. She was pronounced dead at the scene. The medical examiner’s office identified her as Danielle Pearson of Austin.

The shooting happened blocks away from the scene where two people were killed and four others were hurt earlier in the morning. A male suspect fired shots at a crowd about 2:05 a.m. in the 100 block of North Pine Avenue during an argument, police said. Someone returned fire, striking him as well.

Two men and a woman were taken to area hospitals in good condition, police said. The suspect was taken to Stroger Hospital in critical condition.

Another man was killed Saturday morning in River West. Officers responding to reports of shots fired found the 34-year-old man on the ground with a gunshot wound to his back about 3:20 a.m. in the 700 block of North Morgan Street, according to police. He was taken to Northwestern Memorial Hospital, where he was pronounced dead, police said. The medical examiner’s office identified him as Patrick L. Clinton.

Saturday afternoon, a man was shot dead in West Englewood. A 32-year-old man was driving about 2:05 p.m. in the 2300 block of West 63rd Street when a male suspect in a dark-colored SUV pulled alongside him and fired shots, police said.

The man was shot in the chest, and he was pronounced dead at Christ Medical Center in Oak Lawn, police said. He was identified as Joshua Davis of Chicago Lawn.

The first-reported fatal shooting happened shortly after midnight Saturday in the same neighborhood. Officers responding to reports of a person shot found the 34-year-old man unresponsive on the ground in the 6200 block of South Seeley Avenue, police said. Walter Leflora, of West Englewood, had a gunshot wound to the back of his head and was pronounced dead at the scene, officials said.

In nonfatal shootings, a woman was grazed by a bullet Sunday in West Rogers Park in a shooting that also hit a Chicago Fire Department firehouse. She was driving about 6:30 a.m. in the 6200 block of North California Avenue when someone fired shots at her from the street, police said. She drove herself to Stroger Hospital and was treated for a graze wound to her head.

The firehouse at 6239 North California Avenue was among the buildings that were shot, police said. No other injuries were reported.

Three people were wounded in a shooting Saturday in Lawndale on the West Side. Two males walked up to the men and opened fire about 7 p.m. in the 1800 block of South Pulaski Road, police said.

Twenty-nine others were wounded in shootings between 5 p.m. Friday and 5 a.m. Monday.