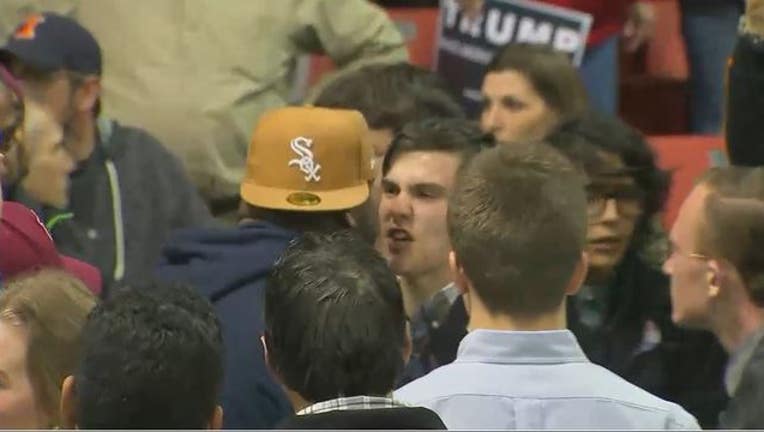 ORLANDO, Fla. (AP) — Donald Trump says he can unify the country. Now, he has to prove it.

The Republican presidential front-runner canceled a Friday night rally in Chicago rather than enter a tense cauldron of animosity between his supporters and protesters — some of whom then proceeded to face off in several violent altercations as the political gathering veered dangerously close to a riot.

It was an ugly incident unlike anything seen in presidential politics in decades. Yet in the immediate aftermath, Trump denied any responsibility for the clash and showed little willingness to change his tone.

The latest dark chapter in an already unconventional 2016 White House campaign comes as the Republican front-runner insists he's beloved by African Americans and Hispanics and makes calls for unity a central part of his closing argument ahead of Tuesday's slate of primary elections in five delegate-rich states.

The Chicago chaos presents the biggest leadership test yet for the Republican outsider, the deeply divided Republican Party and an even more sharply splintered nation that he seeks to lead.

And while extraordinary by any standards, perhaps the biggest surprise was that it didn't happen sooner.

Since casting Mexicans immigrants as rapists and criminals in his June announcement speech, Trump has encouraged supporters to embrace anger tinged with xenophobia. In recent weeks, his rallies have featured several minor incidents of violence involving protesters, almost all of them minorities, with Trump repeatedly encouraging his supporters to fight back — and to do so with violence if necessary.

On Friday morning, Trump cheered a supporter who punched a black protester in the face earlier in the week. The aggressor was later charged with assault.

"The audience hit back," Trump said, suggesting his supporter was provoked. "That's what we need a little bit more of."

At a Friday afternoon rally in St. Louis, before the canceled event in Chicago, he panned protesters as weak "troublemakers" and ordered them to "go home to mommy."

"These are the people that are destroying our country," Trump said.

Dismissed by his critics as an entertainer woefully unprepared to lead a nation, Trump now has an opportunity to demonstrate leadership in a crisis. He showed little evidence in the hours after the incident that he would make good on his pledge to unify the country with any kind of contrition.

"I don't take responsibility. Nobody's been hurt at our rallies," he told CNN during one of many television interviews he gave late Friday, during which he said he decided to cancel his appearance to avoid more serious violence or even death. "There's very few people hurt. And we should be given credit for that."

Republicans have spent months tip-toeing around Trump, fearful of alienating his loyal and enthusiastic supporters. Trump has filled the void left by party leaders' tepidness with rhetoric aimed squarely at Hispanics, Muslims and those who come to his rallies to protest.

At Thursday night's GOP debate, less than 24 hours before Trump's Chicago rally, all three of his remaining presidential rivals side-stepped questions about whether they were concerned about earlier incidents of violence at the front-runner's event. None directly said Trump bore responsibility.

But with the scenes from Chicago blanketing cable news Friday night, they were suddenly far more willing to put the blame on Trump.

Rubio said Trump needs to "own up" to the impact of the rhetoric he's used. "There are consequences to the things people say in politics," he said.

Trump's rivals are faced with the prospect that they've taken a stand too late — and that their earlier silence has amounted to tacit support for the brash billionaire's actions. The high-stakes primary contests in Ohio, Florida and three other states are just a few days away.

Trump blamed the state of the nation's economy and President Barack Obama's leadership when asked about what prompted the violent clash at his rally.

"It's a divided country," he said. "It's been that way for a long time. It's very sad to see. It's divided among many different groups."

Voters now get to see whether he can help bridge those divisions, or will make them worse.