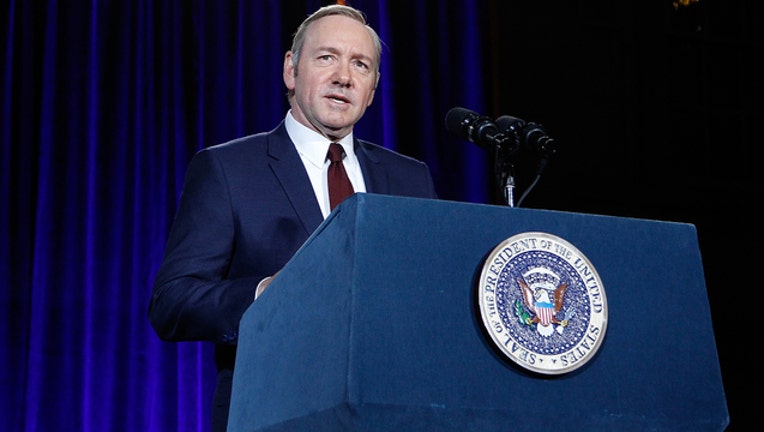 Kevin Spacey speaks on stage at the portrait unveiling and season 4 premiere of Netflix's 'House Of Cards' at the National Portrait Gallery on February 22, 2016 in Washington, DC. (Photo by Paul Morigi/Getty Images For Netflix)

LOS ANGELES - (AP) -- Filming of season 6 on the political thriller "House of Cards" has been suspended following accusations that Kevin Spacey made sexual advances on a teen boy some three decades ago.

Netflix and the show's producer Media Rights Capital had already decided to end the series at the end of the current season but on Tuesday they chose to pause the production, which is filmed in Baltimore, "to give us time to review the current situation and to address any concerns of our cast and crew." Spacey was not scheduled to work that day.

The move comes after actor Anthony Rapp came forward with claims Spacey made inappropriate sexual advances toward him in 1986, when he was 14.

Spacey responded by saying he doesn't remember the alleged encounter but if he acted the way Rapp alleges, "I owe him the sincerest apology for what would have been deeply inappropriate drunken behavior." He also spoke publicly for the first time about being gay, which draw backlash from some observers as an attempt at deflection.

Spacey is the latest Hollywood figure to be named in widening allegations of sexual harassment and abuse in entertainment, media and other industries. The avalanche of allegations began earlier this month after the New York Times published a story alleging that producer Harvey Weinstein had sexually harassed numerous women.

The fallout for Spacey also included the loss of an award he was going to get later this month by The International Academy of Television Arts & Sciences. The group says "it will not honor Kevin Spacey with the 2017 International Emmy Founders Award," which is to honor "an individual who crosses cultural boundaries to touch humanity." Spacey was to get it at a gala on Nov. 20 in New York City. Past recipients include Steven Spielberg, Shonda Rhimes and J.J. Abrams.

A release date for the final "House of Cards" episodes has yet to be announced. Netflix is developing a possible spinoff of the award-winning drama that helped put the streaming service on the TV series map.

The Independent newspaper, Press Association and Sky News say London's Metropolitan Police is now investigating allegations against Weinstein by 7 women over incidents that reportedly took place from the 1980s to 2015. Weinstein is also being investigated by police in New York and Los Angeles.