KENOSHA, Wis. - Despite another 7 p.m. curfew Saturday night in Kenosha, police took several people into custody after dark, including one woman who was swinging what appeared to be two swords against a light pole outside the courthouse.

Earlier in the day, thousands cheered as Jacob Blake’s father posed a question to police: “What gave you the right to try to kill my son?”

They marched, they spoke, nearly cried and in the end rallied supporters to take their anger to the polls.

“We need to march on them ballot boxes,” said Congresswoman Gwen Moore from Wisconsin. 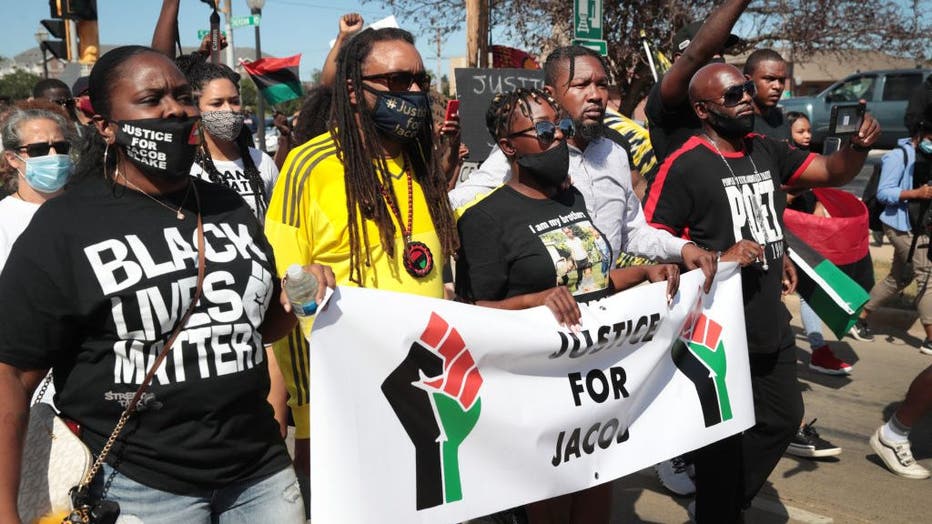 Family members of Jacob Blake march with supporters to the Kenosha County Courthouse on August 29, 2020 in Kenosha, Wisconsin. Blake was shot seven times in the back in front of his three children by a police officer in Kenosha.(Photo by Scott Olson/

Using a phrase coined by Dr. Martin Luther King Jr., Moore urged her constituents to pass the Justice in Policing Act. The legislation would ban chokeholds and no-knock warrants across the country, and require body cameras.

“I’m the mother of two black men and I shiver every time they walk out the door,” Moore said.

Kenosha police shot Jacob Blake seven times in the back Sunday. Protests have gotten ugly with bottles, fireworks and tear gas hurled across police lines, fires set on numerous automobiles, and a shooting that killed two Black Lives Matter supporters and wounded another.

Prosecutors have charged a 17-year-old from Illinois in the fatal shooting of two protesters in Kenosha, Wisconsin, and the wounding of a third.

“Those are our fellow brothers I don’t care what color they are. They were out there with us,” said a woman identifying herself only as Portia.

Portia says she met Anthony Huber as she was being tear gassed in Kenosha.

"[He] literally came and stood in front of me while I was on my knees with my arms in the air and shielded me from tear gas,” said Portia.

“Let’s also pray for a speedy recovery for Jacob and that his children that witnessed such tragedy can heal,” said Tim Mahone.

To let the healing begin for his family and for the community, Jacob Blake’s father made an emotional plea.

“Good people of this city understand, if we tear it up we have nothing. If you tear it up, then we’ll have nowhere to go. I don’t want you all to be homeless. I don’t want you to be storeless. Do me a favor. My nation is asking you. Stop it. Stop it," Jacob Blake Senior said,

President Trump told reporters this evening that he plans to visit Kenosha on Tuesday.