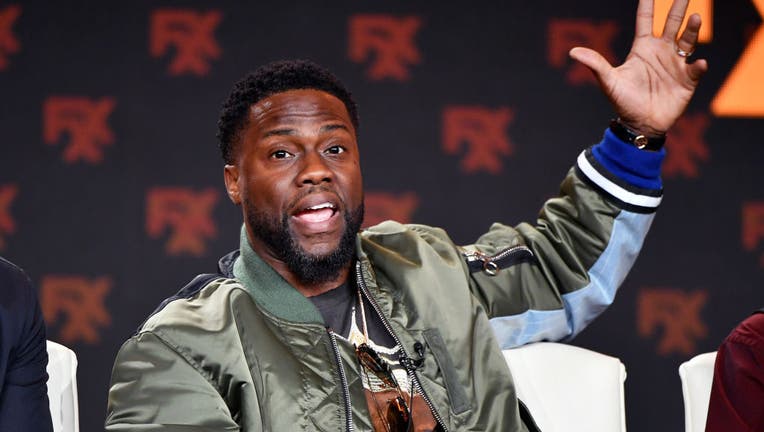 PASADENA, CALIFORNIA - JANUARY 09: Kevin Hart of 'Dave' speaks during the FX segment of the 2020 Winter TCA Tour at The Langham Huntington, Pasadena on January 09, 2020 in Pasadena, California. (Photo by Amy Sussman/Getty Images)

LOS ANGELES - Kevin Hart revealed on his show "Hart to Heart" in an interview with Bryan Cranston the date he plans to retire.

While talking with his co-star of "The Upside" the duo were determining when a graceful time would be to step away from the entertainment industry.

"If I get to the point I can’t memorize my lines, I’m not going to be an actor on stage with ear buds in [feeding me lines]," said Cranston.

Kevin Hart then replied, "Here’s the difference. I have an end date. I already have it in my head."

At first Kevin was unwilling to share with Bryan and the viewing audience what that date was until he finally gave in.

This is how the conversation went down.

KH: "I’m thinking about the day that I shut it off, but the part that I shut off is my personal investment. The machine should still be able to run from everything I’ve put into it, but I do have a date in time."

BC: "Now when you say that date, the shutoff date, your enterprise will continue to go on?"

BC: "Are you saying that you will completely walk away? You won’t be going in but you are gone moving in a different direction?"

There it is. According to Kevin Hart himself, he plans to retire around his 50th birthday on July 6, 2029. That gives us a little less than eight more years of Kevin Hart movies, stand up comedy specials and more before he hangs up the towel.

This doesn’t mean his company HeartBeat Productions will stop creating content by any means, but that he plans to spend more time enjoying the success of his career with friends and family.

Kevin has over seven film projects in the works (according to IMDB), plus countless comedy shows internet series, and more he’s creating.

Watch the "Hart to Heart" episode of him announcing his retirement date in his interview with Bryan Cranston now on Peacock.