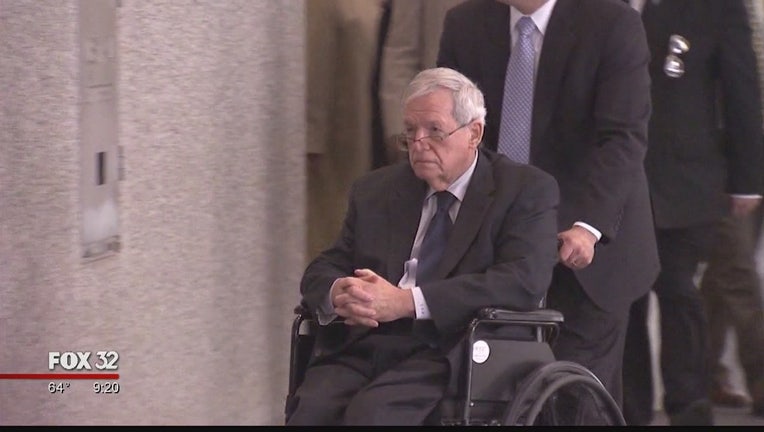 CHICAGO - Former U.S. House Speaker Dennis Hastert has sought to retract key admissions he made during his federal criminal case years ago that he sexually abused a then-high school student, a filing in an ongoing civil case alleges.

The document filed by lawyers for the accuser cites a 2018 deposition in which Hastert says his legal team crafted admissions that he had molested the teenager but that he didn't agree with much of it.

WMAQ-TV reported Wednesday that it found what was supposed to be a sealed filing in the suburban Chicago court where the accuser sued for nearly $2 million in hush money he says Hastert still owes him.

The filing says Hastert, 77, may have committed perjury and it proposes notifying federal prosecutors, Hastert's federal sentencing judge and probation officials that Hastert appeared to walk back his admissions.

According to the filing, the accuser's lawyer, Kristi Browne, asks Hastert during the September 2018 deposition whether he now didn't concur with his signed plea agreement in his criminal case in which he admitted sexual misconduct.

"I didn't have any choice," Hastert answered. "I wanted to structure a plea agreement and get it over with."

When asked if he then "lied" to his judge in 2016 when he said in a written statement at sentencing that he'd abused her client when he was 14, Hastert said his lawyers consulted him about the statement "but they wrote it."

Hastert's attorney in the civil case, John Ellis, on Thursday declined comment on the filing.

In sentencing Hastert to 15 months in prison, Judge Thomas M. Durkin called him a "serial child molester" for abusing several boys when he coached wrestling at Yorkville High School outside Chicago until 1981.

Hastert told Durkin, "I mistreated some of the athletes that I coached. ... They looked up to me, and I took advantage of them."

The accuser, referred to as "James Doe" in the civil case and as "Individual A" in the federal case, was key to the prosecution that put Hastert behind bars for banking violations for how he paid some $1.5 million in hush money.

Hastert abused Individual A in a motel room on the way home from wrestling camp, touching him inappropriately after suggesting he would massage a groin injury the boy had, according to government filings in the criminal case.

Hastert said in the deposition last year that his "interpretation" of what happened was that the then-teen "told me he had a groin pull and asked me to work on it, and I did," according to the filing by the plaintiff's attorneys.

Asked why he agreed to pay Doe a total of $3.5 million if the allegations weren't true, Hastert answered that he worried a "press circus" would engulf him and his family if Doe went public.

"And I didn't want to expose my family to that, and so I was under stress and I agreed to pay him," the deposition quotes him as saying.

In addition to the prison term, the judge also ordered Hastert to undergo sex-offender treatment, spend two years on supervised release from prison and pay a $250,000 fine to a crime victims' fund.

A pretrial hearing in the civil case was scheduled for Friday.