A community meeting Thursday night in Woodlawn was packed with many people not happy about the city’s decision to go ahead and open up a shelter for asylum seekers – without their input – at a vacant elementary school campus.

Mayors from across the United States will meet behind closed doors on Wednesday to discuss the surge of migrants into their cities, as the issue has been a source of continuing controversy and even sparked public clashes between state officials.

The U.S. Conference of Mayors is holding its winter meeting and on Wednesday will hold a closed session on "Responding to Influx of Migrants" -- which comes amid a two-year long crisis at the southern border that has spilled over into cities deeper into the interior.

There were more than 2.3 million migrant encounters in FY 2022 and the first months of FY23 have outpaced the same time period from the prior year. Customs and Border Protection sources told Fox News this week that encounters for December are set to exceed 250,000 -- a new record.

But the knock-on effect of that crisis has been that some migrants, often with the help of non-governmental organizations or state officials in Texas, Arizona and elsewhere, have been moving in droves into cities -- particularly "sanctuary" cities like Washington D.C., New York City and Chicago.

Even though cities like the Big Apple have faced a relatively low number of migrants -- with Mayor Eric Adams putting the number at 40,000 -- it has overwhelmed their social services systems. Consequently, mayors like Adams and Lori Lightfoot in Chicago have called on the federal government to do more to help. 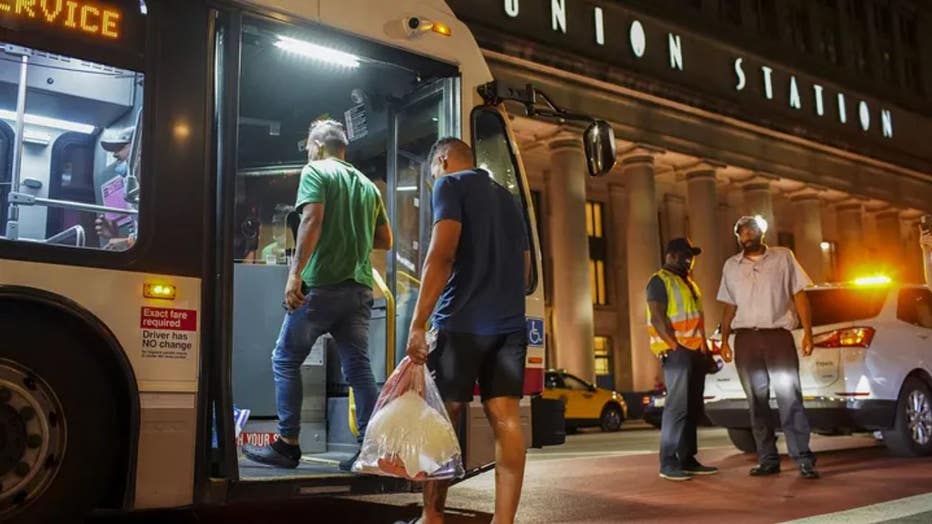 A group of migrants board a CTA bus at Chicago&amp;apos;s Union Station to be taken to a Salvation Army shelter after arriving from Texas on Aug. 31, 2022. (Armando L. Sanchez/Chicago Tribune/Tribune News Service via Getty Images)

Adams recently visited El Paso, Texas, and said that he believes there needs to be more national coordination.

"I think it should be done through FEMA. We should treat this the same way we treat any major disaster or major crisis" Adams told reporters on Tuesday. "That should be coordinating with the Border Patrol, coordinating with our cities, our states, to make sure that we as a country absorb this national issue. And that's what I learned when I was on the ground there. The lack of coordination is really causing this to be hit by certain cities."

Adams also repeated his claim that there is "no more room" in New York City and called for a "decompression strategy" to relieve the pressure on cities like New York.

But Adams has not only taken aim at the federal response but also at officials in other states. He was engaged in a public feud with Texas Gov. Greg Abbott last year over Texas’ bussing of migrants to his city and recently took aim at fellow Democratic politicians in Colorado for sending migrants.

That bussing was in response to overcrowding in Denver, where Mayor Michael Hancock had declared a state of emergency after thousands of migrants hit his city over the Christmas period.

Mayor Lori Lightfoot has until the end of January to find funding for the thousands of migrants bused to Chicago from Texas.

The state was involved in sending buses to cities like Chicago and New York City, which drew a scathing response from Lightfoot and Adams.

"These actions do not live up to the values of a proclaimed welcoming state and should stop immediately," they wrote.

Polis’ office had defended the buses, saying that about 70% of migrants arriving in Denver do not have Colorado as a final destination. As a result, the state said it was working with non-profits to "provide intake, processing, and transportation coordination to help migrants safely reach their desired final destination."

However, his office later said he had a "very productive" conversation with Adams and Lightfoot and that there would be no more buses scheduled to their cities.

"Now that nationwide travel has returned to the status quo because the holidays and the impact of weather have normalized transportation pathways, Colorado has been in the process of scaling back this transportation," the statement said.

Denver put its own limits on migrants, announcing last week that stay in emergency shelters are "to last no more than two weeks" as it seeks to maintain "sustainable, safe and stable operations while continuing to bring our recreation centers back online for the Denver community."

Meanwhile, the Biden administration has been ramping up its own efforts to curb the historic surge. Biden recently visited the border after announcing a slew of measures including an expanded parole program, greater Title 42 expulsions and a rule to make migrants ineligible for asylum if they have crossed a third country.

But Biden has claimed that the border crisis cannot be solved until Congress passes a sweeping immigration bill that Republicans have so far rejected due to its inclusion of a path to citizenship for illegal immigrants.

"That work will not be done unless and until Congress enacts and funds a more comprehensive immigration plan that I proposed on day one," he said in a speech from the White House earlier this month.