TROY, Mich. (FOX 2) - A couple in Troy is responding to the racism they say they've been shown by neighbors with some attention-grabbing signs on their front lawn.

"We wanted to make a very obvious declaration that I'm not going to tolerate it and I'm going to use my First Amendment right to do so," said Hannah Mullins.

A couple in Troy is responding to racism they say they've been shown by neighbors with some attention-grabbing and controversial signs on their front lawn.

The Mullins are parents and Airforce veterans and tell us the story behind their signs involves their neighbors, known as "Jukebox Larry" and his wife Lisa. FOX 2 featured them this spring when they started putting on outdoor concerts during the pandemic in their Troy neighborhood.

But two hours of their music every week caused the Mullins to ramp up their music in protest. And their music of choice? Hip-hop.

"The only time they play their music loud is when we are trying to do our concerts," said Lisa Maxwell.

And the Mullins say the police were called because of it.

"You guys enjoy one type of music loudly but as soon as I play "Black music" it's a problem," Mullins said. She said other neighbors even hurled racist insults. "There was some stereotypical vernacular thrown our way and we didn't respond nicely to it."

But the city stepped in, getting them on a code violation, so they kicked it up a notch with the one now that reads "Racism is for [expletive]." 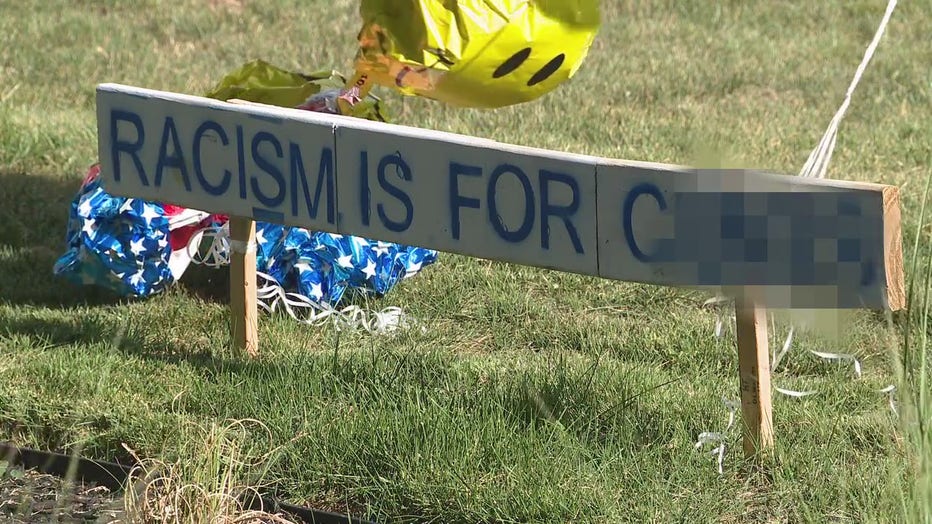 "I'm sad," Larry Maxwell told us. It's Larry and Lisa's view now, and they've had to move their shows blocks away out of earshot.

"They have pretty much destroyed everything we were working towards in getting the neighbors to come together," he said.

Although no one has been ticketed, Larry and Lisa say it's a moral issue, not a legal one.

"I have a problem with the balloons, especially being called to it, children are going to say, 'Mommy and daddy, what's this word mean?'" Lisa said.

Police have been called to the Mullins' seven times and the Troy city attorney is investigating now to see if charges are in order.

"We're not going to have [the sign] up forever but you might have to take me kicking and screaming," Mullins said.

The Mullins are taking things a step further and are creating a website to sell t-shirts with that key phrase, even a kid-friendly version. They'll donate the proceeds to charity.