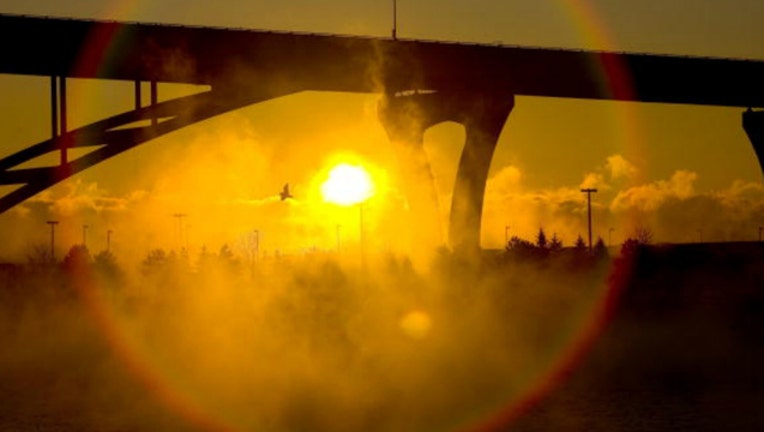 FOX NEWS - Midwesterners awoke to frost and freezing temperatures Wednesday as a polar vortex slammed the region. But the arctic deep freeze brought more than just cold weather: it introduced parts of the Midwest to "sun dogs," a unique atmospheric optical phenomenon.

In short, a sun dog is a special glow that occurs when light from the Sun refracts off "plate-shaped" ice crystals in wispy cirrus clouds, according to Time and Date.

The National Weather Service (NWS) confirmed sightings of both sun dogs and "halos" in Sioux Falls, South Dakota, on Tuesday morning. Sun dogs, identified by their bold burst of light, are typically located about 22 degrees from the Sun.

"The colors usually go from red closest to the sun, out to blue on the outside of the sundog," the NWS explained in a blog post.

Like sun dogs, halos also form around the Sun.

"A halo is a ring or light that forms around the sun or moon as the sun or moonlight refracts off ice crystals present in a thin veil of cirrus clouds. The halo is usually seen as a bright, white ring although sometimes it can have color," Time and Date explains.

Minnesotan Sam Keasling told Fox News she also spotted "beautiful" sun dogs in Harmony around sunrise Wednesday. Since the Gopher State is prone to cold and snow, Keas admits she "sees them often."

"The sunrise was pink and so was the sun dog," she described. "It actually lasted for hours, which I believe is somewhat unusual. I think the reason is because it's so cold."