The Naked Cowboy, a man known for playing guitar in New York City's Times Square while dressed in just his underwear, was arrested in Daytona Beach this weekend.

DAYTONA BEACH, Fla. - The Naked Cowboy, a man known for playing guitar in New York City's Times Square while dressed in just his underwear, was arrested in Daytona Beach this weekend.

Public records from law enforcement show that Robert Burck was arrested for resisting an officer without violence and aggressive panhandling.

FOX 35 reporter Matt Trezza attended his court hearing and said that the well-known street singer was in Daytona Beach for Bike Week, an annual gathering of bikers.

During the court appearance, Burck told the judge what he is known for.

"I sing and play guitar in my underwear," he said. "I'm the Naked Cowboy from New York City. I've been coming down here 21 years in a row."

Burck explained that he was in Daytona Beach for Bike Week and was arrested while playing his guitar on the street. He added that, "I'm not asking for money. I just play the guitar and people take pictures and sometimes they put money in." 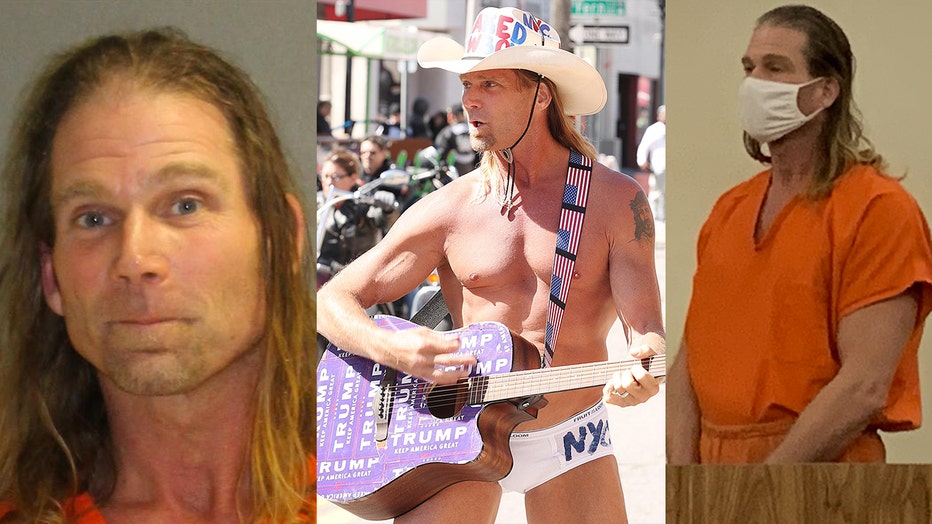 However, he was still ready to accept responsibility for the charges, telling the judge that, "It was a pretty big ordeal. I was just mad. I wasn't mad at anybody in particular."

After talking with the public defender, Burck insisted he wanted to settle everything then and there. The judge dismissed the panhandling charge and let Burck plead "no contest" to the resisting charge.

"I find that your plea is knowing, voluntary and intelligent... supported by a factual basis with a full understanding of the consequences. I'll accept your no contest plea," the judge said.

He sentenced Burck to time-served and ordered him to pay $223 in court costs.