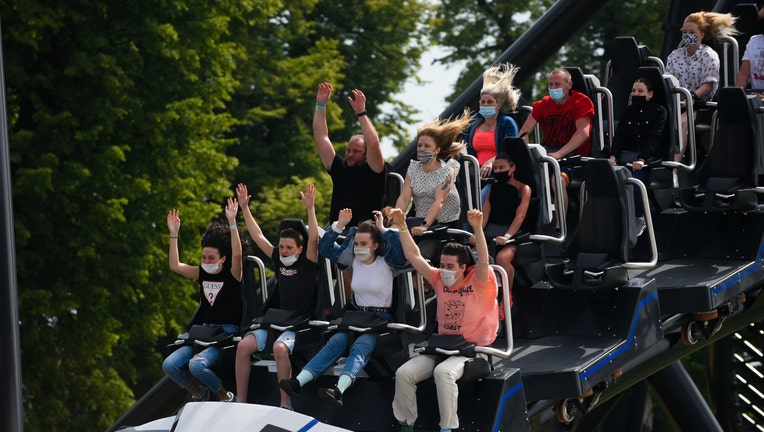 TOLEDO, Ohio - Hugs from Mickey Mouse are out at Walt Disney World. So is bunching up at Six Flags to snag a front-seat roller coaster ride. But the season won't be completely lost for thrill-seekers.

Carefree days of sharing cotton candy on crowded midways will give way this year to temperature scans at the gates, mandatory masks at many parks, hand-sanitizing stations at ride entrances and constant reminders to stay 6 feet apart.

Amusement parks of all sizes are adjusting everything from selling tickets to serving meals while trying to reassure the public and government leaders that they're safe to visit amid the coronavirus crisis.

While a handful of small U.S. amusement parks have been open since Memorial Day weekend, most are looking to restart their seasons either later this month or by mid-July. Universal Orlando became the first of Florida's major theme park resorts  to reopen in early June. Disney's nearby parks will wait until next month, but there won't be any parades, firework shows or character greetings.

Disneyland in California said this past week it will welcome back visitors on July 17 if it gets government approval. Theme parks in many states have been among the last businesses allowed to reopen because of worries over crowds. Ohio's two biggest amusement parks filed a lawsuit last week challenging the government's authority to shut them down.

Park operators insist they're better suited to handle crowds -- albeit smaller ones -- than ballparks and museums because they have more space to spread out and can better control the movements of their customers. But there is also a lot more to consider in order to reopen safely. There's collecting parking fees and selling souvenirs. Shows and hotels. Arcades and playgrounds.

"We have restaurants that are walk-up, grab and go, catering, and sit-down. And that's just the food department," said Leah Koch, owner of Holiday World in southern Indiana. "We have to go ride by ride through this process. We have to go game by game. We have to look at each and every situation."

At most theme parks, the "new normal" will be apparent before visitors arrive, starting with online admission reservations to manage the daily crowds. Many will start out allowing no more than half their normal capacity.

Cedar Fair Entertainment, which operates theme parks across North America including Ohio's Cedar Point, will require guests to fill out health screenings before they show up and to go through temperature checks at the gate. Among the changes at Six Flags parks are touch-free bag checks with high-tech, walk-through machines.

And there will be constant reminders to keep social distancing, from decals on the pavement in queues to roving "social distance squads" at Disney World. Shoppers at the Disney Springs entertainment complex were greeted last month by Stormtroopers from the Star Wars movies who ordered visitors to "move along" and "stay in your sector."

Inside the gates, some parks will use "virtual queueing" through apps to cut down on long lines. Employees will assign seats on rides, leaving some spots open and making sure you only sit with your group. On many roller coasters, only every other row will be filled.

While some parks will rely on state guidelines to determine whether their guests should wear masks, most of the big theme parks will require them, even on the rides. And yes, test runs did show that masks will stay put on the big coasters, said Erik Beard, an owner of International Ride Training, a consulting company that works with the industry.

"We were all pleasantly surprised," he said. "We understand some people wont be comfortable, and that's OK. "We're banking on low numbers anyway."

Requiring masks will certainly keep some away if the  reaction on social media  is any indication.

Smaller crowds will allow the parks to figure out what works and what doesn't. But how many show up? So far, not that many.

"For us it was a treat, everything was a walk-on all day," said Matt Coons, a roller coaster fanatic from Hamilton, Ohio, who drove seven hours to Wisconsin last month for opening day at Mt. Olympus Water and Theme Park.

Coons took note that some people standing in lines were good about social distancing and "some had no care."

"It was hit or miss, for the most part people were pretty good," he said. "As the day went on, you kind of forget, you get in theme park mode. I had to remind myself."

Park operators have conducted trial runs with employees to determine such things as how to maintain social distancing while loading rides and checking restraints.

Holiday World, in Santa Claus, Indiana, decided it won't allow riders to sit in the front seat on The Legend roller coaster because that's too close to the ride's operator. It also won't operate a kiddie canoe ride -- too much lifting the little ones in and out of the boat, said Koch, whose family has owned the park for four generations.

The challenge this summer, she said, will be keeping that same magical feeling from past years.

"There's not anything about this season that will be perfect," she said.