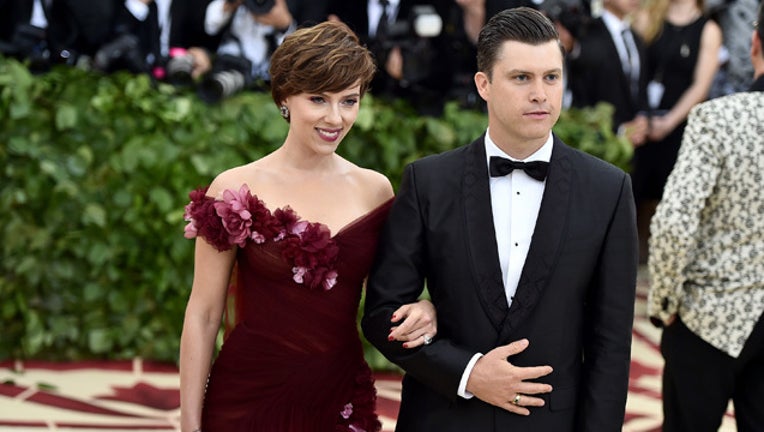 Scarlett Johansson and Colin Jost attend the Heavenly Bodies: Fashion & The Catholic Imagination Costume Institute Gala at The Metropolitan Museum of Art on May 7, 2018 in New York City. (Photo by Theo Wargo/Getty Images for Huffington Post)

NEW YORK (AP) - Scarlett Johansson has pulled out of the film "Rub & Tug" after her plans to portray a transgender man prompted a backlash.

In a statement to Out.com on Friday, Johansson says she's withdrawing from the project "in light of recent ethical questions raised surrounding my casting." Last week, Johansson said she would star as Pittsburgh 1970s and '80s prostitution ring leader Dante "Tex" Gill, who was born Lois Jean Gill but identified as a man.

When transgender actors and advocates questioned the casting, Johansson initially responded with a statement that criticism "can be directed to Jeffrey Tambor, Jared Leto and Felicity Huffman's reps." All are actors who won acclaim for playing transgender characters.

"Our cultural understanding of transgender people continues to advance, and I've learned a lot from the community since making my first statement about my casting and realize it was insensitive," said Johansson, who added that she had "great admiration and love for the trans community."

"While I would have loved the opportunity to bring Dante's story and transition to life, I understand why many feel he should be portrayed by a transgender person, and I am thankful that this casting debate, albeit controversial, has sparked a larger conversation about diversity and representation in film," the actress added.

Johansson previously came under fire for playing an originally Asian character in the 2017 film "Ghost in the Shell." That film's director, Rupert Sanders, was set to also helm "Rub & Tug." It's not clear if the film, which Johansson was also producing, will go forward. A representative for Johansson didn't immediately respond to an email Friday.

New Regency, which was set to produce, also didn't immediately respond to queries.

Jen Richards, trans activist and creator of the web series "Her Story," praised Johansson for stepping down.

"If you're tired of hearing about it, you can't imagine how tired trans actors are of talking about it," Richards said on Twitter. "We just want to work. And with more trans and nonbinary people, of all kinds, participating, the work will be a better and richer representation of our world. This is a win."