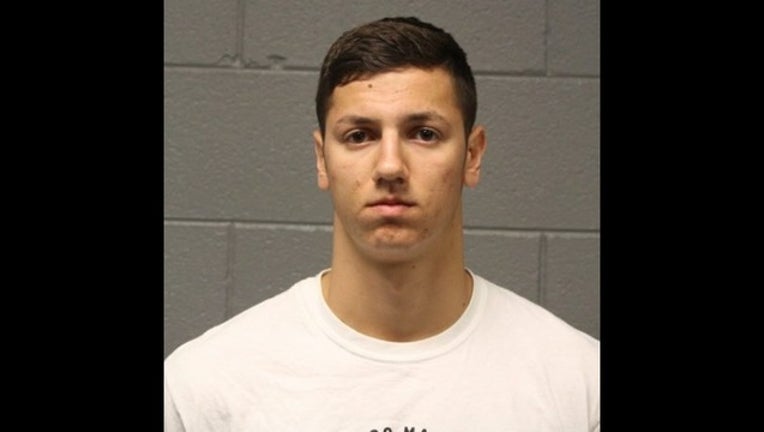 SUN-TIMES MEDIA WIRE - A 19-year-old University of Illinois at Chicago student on the men’s swim team faces criminal charges for allegedly taking video of women’s swimmers undressing in their locker room, the Chicago Sun-Times is reporting.

As they undressed to put on their swimsuits before practice on Feb. 2, a pair of swimmers on the UIC women’s team heard laughter from the beyond the wall their locker room shares with the men’s team, Assistant Cook County State’s Attorney Joseph Carlson said Friday at a bond hearing.

One of the women looked up at a gap between the locker room ceiling and the wall “expecting the men to throw something over the wall,” Carlson said.

Instead, she spotted freshman swimmer Joseph Dalesandro’s iPhone, which had been pointed at the women’s locker room, Carlson said. The 20-year-old woman climbed up the lockers and snatched the phone, noting that it had been recording for 45 minutes.

She stopped the recording, but was unable to access the video. She then handed the phone over to university police, Carlson said.

Wearing a blue UIC windbreaker over sweatpants, Dalesandro bowed his head as he stood before Judge Laura Sullivan on Friday afternoon at the Leighton Criminal Courthouse.

Dalesandro, a graduate of Neuqua Valley High School in Naperville, was ordered held on $50,000 bond, and was barred from entering the locker rooms at the UIC or having any contact with the victims.

Dalesandro’s attorney, Marc Davidson, noted that Dalesandro hadn’t shared the video with anyone.

“This was, I believe, a prank,” Davidson said. “It may be at tasteless one, but it was a prank that went nowhere.”

Dalesandro, Carlson said, was taken into custody by UIC Police on Thursday and unlocked his phone for investigators. He also signed a statement admitting that he had twice climbed the lockers of the men’s locker room and propped his camera in a gap between the wall and ceiling, Carlson said

Around 11 a.m. that day, Dalesandro admitted he pointed the camera into the locker room and recorded about three minutes of footage, showing the two other women’s swimmers changing out of their street clothes and into their swimsuits, Carlson said. After retrieving the camera, Dalesandro edited the video down to about 60 seconds, just showing the two women undressing, Carlson said.

Two hours later, Dalesandro climbed the lockers again and planted his phone, leaving it to record for 45 minutes until the second pair of swimmers noticed the camera.

UIC officials provided police with a list of people who had access to the locker room during the time period, and Dalesandro was one of five men who were in the building, Carlson said.

Dalesandro is “close” with his older sister, Gia Dalesandro, herself a standout swimmer who also starred at Neuqua Valley swim team and then at Indiana University, Davidson said.

Joseph Dalesandro coaches swimming and water polo, and is involved in the Special Olympics, Davidson said.