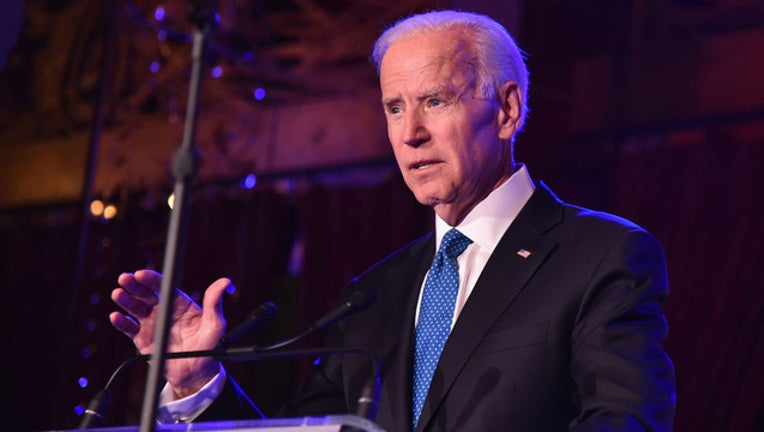 NEW YORK, NY - APRIL 18: Former U.S. Vice President Joe Biden speaks onstage at the Biden Courage Awards Presented by It's On Us at the Russian Tea Room on April 18, 2018 in New York City. (Photo by Theo Wargo/Getty Images for It's On Us)

DES MOINES, Iowa (AP) - Shortly after Joe Biden boarded a recent flight from Washington to New York, a string of passengers began stopping at his seat in coach to deliver some version of the same message: Run, Joe, run. "We're with you," one said, according to a Democratic strategist who happened to be on the plane and witnessed the scene. "You've got to do this," said another.

Biden himself is more conflicted - but he is listening keenly to the supporters pushing him to run for the White House in 2020. Biden is convinced he can beat President Donald Trump, friends and advisers say, and he has given himself until January to deliberate and size up potential competition for the Democratic nomination, according to people who have spoken to the former vice president about his decision-making.

In the meantime, Biden diligently maintains a network of supporters in key states, a group 30 years in the making, while some of those competitors are still making introductions.

As he makes each careful step, Biden faces the same dilemma. For an elder statesman in a leaderless party, one who long envisioned himself in the top job, the pull toward another presidential bid is strong. But the 75-year-old former vice president must weigh the realities of jumping into a crowded primary full of up-and-comers eager to debate the future of the party.

Biden would likely cast a long shadow, but a candidate Biden is not expected to clear what will be a crowded field of aspiring presidents in 2020. He would have competition for the support of the Democratic establishment. And he would almost certainly face tough challenges from the left - the source of much of the party's energy at the moment - possibly from liberal firebrands Vermont Sen. Bernie Sanders or Massachusetts Sen. Elizabeth Warren.

Biden would likely cast himself as a more centrist Democrat with working-class appeal, bipartisan credentials and grounding in a more civil political culture that has faded in the Trump era, said Jim Margolis, a top adviser to Obama's 2008 and 2012 campaigns.

"He would carry the imprimatur of the Obama administration in addition to occupying a space in the middle that isn't as crowded as others who are more actively running," said Margolis.

He hit those themes gently at a memorial service for his late Senate colleague, Republican John McCain, last week.

"I always thought of John as a brother," Biden said. "We had a hell of a lot of family fights."

Biden has eyed the presidency for more than 30 years, waging a failed campaign for the party nomination in 1988 and another 2008, before Obama named him his running mate. He passed on running again in 2016 as he dealt with his son Beau's battle with brain cancer. The younger Biden died in March 2015, as the Democratic campaign was taking shape.

Since leaving the vice president's office he has emerged as among the party's most popular national figures, and one of its most willing Trump adversaries.

Biden is in regular talks with a small team of longtime friends and advisers. He also talks to potential donors and longtime staff about the possibility of another campaign. However, he has also signaled to them they are free to ally with other prospective candidates, as he eyes a January timeframe for deciding on whether to run, according to three people familiar with Biden's thinking who spoke to The Associated Press about his plans on the condition of anonymity because they were not authorized to discuss private conversations.

That leaves Biden for the next two months as one of his party's most sought-after 2018 campaign headliners. He plans to make multiple campaign stops a week this fall for Democratic candidates, according to people familiar with the plans.

"As the vice president has said many times himself, he is focused on electing as many Democrats as possible all across the country and on encouraging people to get out and vote this fall," Biden adviser Kate Bedingfield said. "That's the focus of his energy right now."

Biden's choices so far have shown off his deep ties to key early states. He has campaigned for a young former aide now running for Congress in northeastern Iowa, a part of the state with enduring personal loyalty to Biden but that swung toward Trump in 2016.

He recently penned an op-ed in The Des Moines Register eulogizing the late Rep. Leonard Boswell, an act that was not political but at the family's request, according to aides.

"If he wants, the day he says he wants to be running for president, he would have a built-in network here," Harpootlian said. "He's got friends here going back 30 years."

Not all early-state party activists are clamoring for Biden Part III.

What's left of his New Hampshire network, for instance, is fragmented, aging and undecided heading into 2020, said John Broderick, state chairman of Biden's first campaign. Though Broderick, now 70, said his own family would gladly support Biden again, many in Biden's New Hampshire support network "are getting longer in the tooth like I am."

Likewise, Iowa Democrat Mary Maloney, a leading campaign activist for both of Biden's campaigns, said she would support him, but wondered if younger voters would roll their eyes at yet another Baby Boomer candidate. "I don't know if a lot of young people get Joe Biden," said Maloney, who is 63.

"There's a lot of young talent within the party that would like to run themselves," he said.

All that aside, Margolis, who is in touch with Biden's team, said,"I'm pretty confident that he and his closest advisers legitimately believe he has a real shot at this."

"Just watching on the plane, one after another coming up to him," Margolis said. "Joe Biden was the happiest guy in the world."