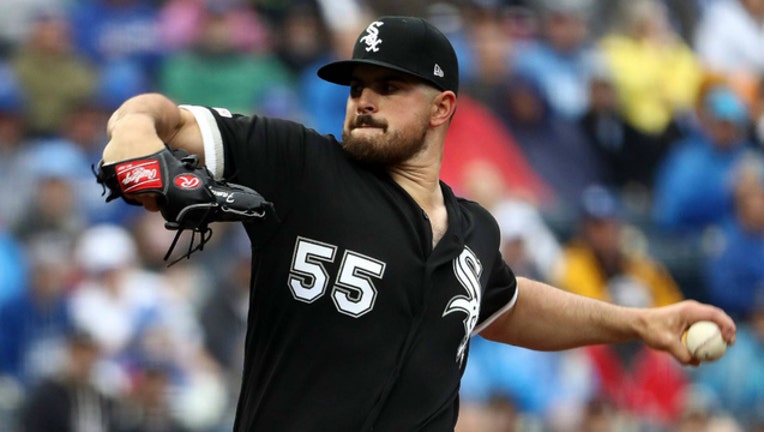 Jose Abreu nearly had a grand slam as well -- to almost the same spot in the ballpark -- but settled for a sacrifice fly when right fielder Aaron Judge made a jumping catch in front of the wall. Held to one hit Saturday in a 4-0 loss, Chicago chased Masahiro Tanaka with nobody out in the fifth and won for only the second time in eight games.

Yoan Moncada had three hits and a walk for the White Sox (5-9), who stole five bases in the last five innings -- several of them uncontested. Chicago won two of three to take consecutive series in the Bronx for the first time since 2002-03. Before last August, the White Sox hadn't captured a series at Yankee Stadium since 2005.

With the injury-ravaged Yankees (6-9) missing five dangerous regulars from their lineup, Judge did all he could in this one. He scored on Luke Voit's double, lined an RBI single and threw out Moncada trying for a two-base hit. New York handed Tanaka (1-1) an early 2-0 lead, but he unraveled in the fourth and fifth as the Yankees lost their fifth in six games.

Rodon (2-2) allowed three hits in six innings and struck out five, improving to 3-0 in three starts at Yankee Stadium. Four relievers finished a four-hitter, with Alex Colome getting three quick outs for his third save.

On deck for the Yankees, a visit from the World Series champion Boston Red Sox in the first meeting this season between longtime rivals both off to slow starts.

New York is 3-6 at home against the Orioles, Tigers and White Sox -- all projected also-rans who lost at least 98 games last year.

Tanaka faced only 10 batters in the first three innings, striking out six, but then all of a sudden he fell apart. Eight of his next 10 hitters reached safely, and the right-hander was done.

Anderson, who began the day leading the majors with a .444 batting average, drove a fourth-inning splitter the opposite way and urged it with a waving hand into the front row of seats just beyond the auxiliary scoreboard in right-center for his third homer and Chicago's first slam of the season.

Abreu added his sacrifice fly after Tanaka exited with the bases loaded in the fifth. Tanaka had permitted one earned run in each of his first three starts.

Yankees: Aaron Hicks (lower back strain) still has no timetable for a return, though manager Aaron Boone said the center fielder is doing really well. "It's been a couple of weeks where we feel like he's completely past the injury. The ramp up has just been a little slow because it obviously took some time," Boone said. "Hopefully batting practice starts at some point this week." ... Boone said catcher Austin Romine has been banged up but declined to get into specifics. Kyle Higashioka made his second consecutive start behind the plate, though Boone said Romine was OK and available to play.

White Sox: Looking for his 150th career win, RHP Ervin Santana (0-1) pitches against one of his former teams Monday night when Chicago hosts Kansas City. The two-time All-Star was tagged for seven runs and seven hits over 3 2/3 innings by Tampa Bay in his White Sox debut last Tuesday. He went 9-10 with a 3.24 ERA in 211 innings for the Royals in 2013.

Yankees: Following a day off, LHP James Paxton (1-2, 6.00) gets his first taste of the Yankees-Red Sox rivalry Tuesday night when he faces struggling Boston ace Chris Sale (0-3, 9.00) in the opener of a two-game set. Paxton told reporters he thought he was tipping pitches in Houston last Wednesday when he allowed five runs and eight hits, including two homers, in four innings. "We realized there was probably something going on from behind that guys could potentially pick up with here or there," Boone said. "Little things that we try to stay really vigilant with, obviously. I'm not going to get too much into it, but we're usually aware of things and constantly addressing things like that."