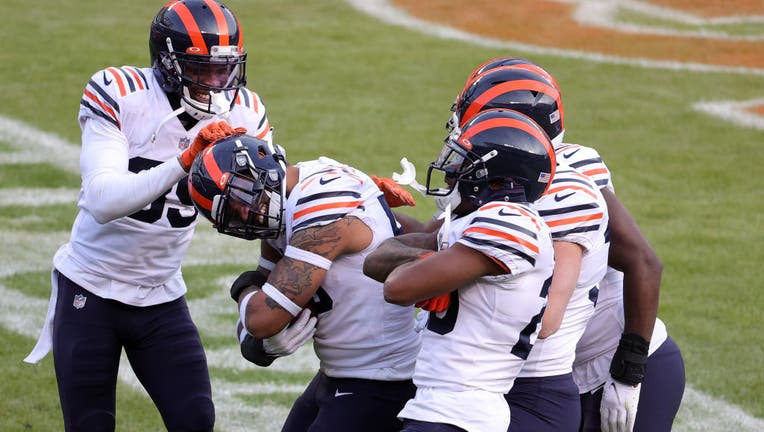 CHICAGO, ILLINOIS - DECEMBER 13: Josh Woods #55 of the Chicago Bears celebrates with teammates after recovering a fumble during a game against the Houston Texans at Soldier Field on December 13, 2020 in Chicago, Illinois. The Bears defeated the Texan

CHICAGO - With calls for sweeping changes getting louder by the loss, the Chicago Bears can breathe a little easier at least.

Their six-game skid ended with a 36-7 romp over Deshaun Watson and the Houston Texans on Sunday. And as hard as it seems to believe, the Bears are still in contention for a playoff spot.

“Our guys came out and they played with a ton of energy and passion,” coach Matt Nagy said Monday. “And this was the first time this season really that we put the three phases together, which was great. ... we’re now in a position to where we need to do whatever we can to give ourselves an opportunity to get into the playoffs — however we do that.”

The Bears (6-7) snapped a six-game skid, their worst since the 2002 team tied a franchise record by dropping eight straight, and are banking on the win over Houston (4-9) to help them turn around what was looking like a lost season. The game was the first of three in a row against teams below .500.

Chicago visits Minnesota (6-7) and Jacksonville (1-12) before the finale against NFC North champion Green Bay (10-3) at Soldier Field on Jan. 3.

The win over Houston was just what the Bears needed.

Mitchell Trubisky outplayed Watson, throwing for three touchdowns in their first meeting since they entered the league in 2017. David Montgomery ran for an 80-yard touchdown on Chicago’s first play from scrimmage. Khalil Mack sacked Watson for a safety, helping the Bears pick up their first win since Week 6 against Carolina.

“It feels good,” Trubisky said. “I think we really needed that as a team. Just the way we’ve been working the last couple weeks, after a win like that it feels all the work is starting to pay off.”

The offensive line. The Bears have 430 yards rushing over the past three games. A big reason is their revamped line.

They inserted Sam Mustipher at center while moving Cody Whitehair to left guard, and going with Germain Ifedi at right tackle and Alex Bars at right guard.

The Bears ran for a season-high 169 yards against Houston. They had 140 last week against Detroit and 121 at Green Bay, after going seven straight games without reaching triple digits.

The offense. The Bears still need to show they can move the ball and score consistently against better teams after doing so the past two weeks against defenses ranking among the NFL’s worst.

They set a season scoring high on Sunday after matching one the previous week in a 34-30 loss to Detroit. They also went off for 410 yards after getting 389 against the Lions — their second and third-highest totals of the season.

They’ll face a somewhat better defense at Minnesota this week and one of the league’s worst when they visit Jacksonville. Green Bay ranked eighth overall through Sunday.

RB David Montgomery. The second-year pro has 288 yards and three touchdowns rushing over the past three games. He ran for a season-high 113 yards on 11 carries against Houston, setting the tone with his 80-yard TD on the Bears’ first play from scrimmage. That tied the fourth-longest run in franchise history.

“I wouldn’t necessarily say anything’s changed,” he said. “I think we’re starting to buy in more, really believe. Believe. It gets to a point where what do you really have to lose?”

OLB Robert Quinn. The two-time Pro Bowl pick continues to be a nonfactor after signing with Chicago in the offseason. His lone sack came in his Bears debut against the New York Giants in Week 2.

Nagy had no update on CB Jaylon Johnson, who suffered a shoulder injury against Houston. He hopes to have him available this week.

7 — The number of sacks the Bears had on Sunday. It’s their highest total since they took down Jake Delhomme eight times in a win over Carolina on Nov. 20, 2005.

The Bears will try to make it back-to-back wins when they visit Minnesota this week. The Bears lost 19-13 to the Vikings on Nov. 16.