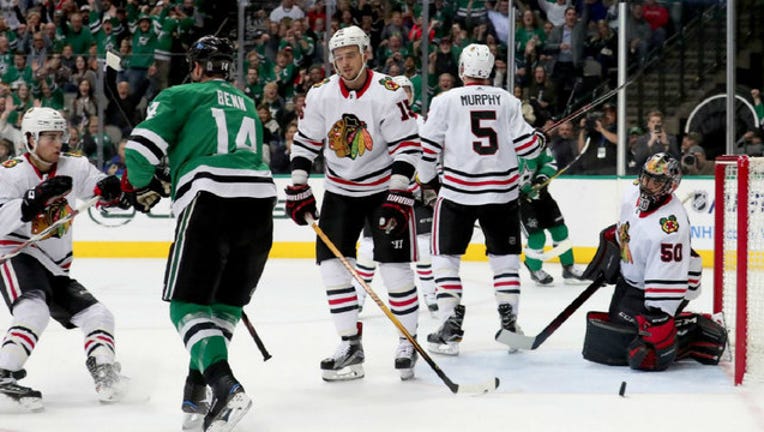 Jamie Benn #14 of the Dallas Stars scores a goal against Corey Crawford #50 of the Chicago Blackhawks in the first period at American Airlines Center on December 21, 2017 in Dallas, Texas. (Tom Pennington/Getty Images)

CHICAGO (AP) -- It was quite a first impression. The Chicago Blackhawks began their season with a dominant 10-1 victory over two-time defending Stanley Cup champion Pittsburgh, looking very much like a contender to unseat the Penguins atop the NHL.

It has been more mess than masterpiece since that impressive opening night in October.

Chicago begins the second half of the season looking up at the rest of the loaded Central Division, where every team has at least 20 wins and 46 points. Goaltender Corey Crawford and key center Artem Anisimov are on injured reserve, and they don't appear to be coming back anytime soon. Coach Joel Quenneville has tried several different lines and defensive pairings, but remains in search of the consistency almost taken for granted during his long tenure with the Blackhawks.

"We know our division, our conference is tough," Quenneville said. "We're in a terrible spot, a spot we haven't been in in a long time. We got to do it ourselves and find a way to climb out of it and work our way through it."

Chicago has made the playoffs every year since Quenneville took over four games into the 2008-09 season. The Blackhawks won it all in 2010, 2013 and 2015, but lost in the first round of the postseason in each of the last two years, including an embarrassing sweep by Nashville last April.

If Quenneville and company can't get back on track in the final part of the season, the organization could be headed for wholesale changes.

"We've had some games where we want to be and then some nights where we're way off," center Nick Schmaltz said after Sunday's 4-1 victory over Edmonton. "If we can find that consistency where we bring the same effort every night -- a full 60 minutes is huge. Tonight was a great showing of that. Hopefully we can build off that and continue to put together a strong performance."

The return of Crawford and Anisimov could provide a big lift. Crawford (2.27 goals-against average, .929 save percentage) was working on perhaps his best season when he was placed on IR on Dec. 27. Anisimov, who has 13 goals, was placed on the injured list two days later.

Crawford and Anisimov are out with upper-body injuries, and Quenneville has provided scant details on what is bothering each player or when they might return. He has indicated Anisimov is closer to coming back than Crawford, and each player should be able to return this season.

"Over the course of seasons, we've had some years relatively injury-free," Quenneville said. "This year was looking pretty clean for a while, but they can happen."

While the injuries and standings are cause for concern for the Blackhawks, there have been some positive signs recently. Vinnie Hinostroza has three goals and five assists in 11 games since he was promoted from the minors last month, adding a speedy presence to Chicago's top line alongside Jonathan Toews and Brandon Saad. Young defenseman Jordan Oesterle has three goals in his last five games.

Chicago (20-15-6) also should be able to take on some money at the NHL trade deadline on Feb. 26. Marian Hossa has been on long-term injured reserve all season, creating some valuable salary-cap space for the Blackhawks as they try to chase down a playoff spot in their crowded division with just 11 points separating Chicago and Central-leading Winnipeg.