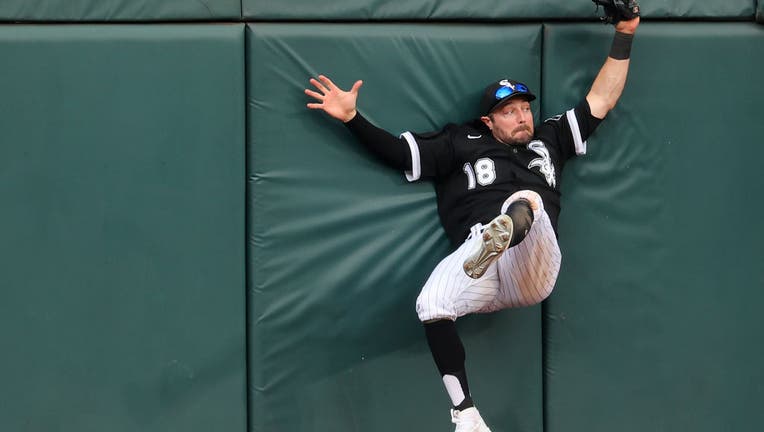 CHICAGO, ILLINOIS - AUGUST 18: AJ Pollock #18 of the Chicago White Sox robs a home run from Jose Altuve #27 of the Houston Astros during the sixth inning at Guaranteed Rate Field on August 18, 2022 in Chicago, Illinois. (Photo by Michael Reaves/Getty

Houston’s run total tied for the second most in team history — the Astros scored 23 against Baltimore in 2019.

The Astros wound up with 25 hits as Bregman, Kyle Tucker and Christian Vazquez tied career highs with four each. McCormick, who had five RBIs, and Trey Mancini homered the AL West leaders.

Bregman, who had an eight-game hitting streak snapped Wednesday, scored four times. He hit a pair of two-run drives for the fifth multi-homer game of his career and his first since May 28, 2019, against the Cubs.

Bregman’s big day actually didn’t start out so well. He was called out on strikes to end the first and had words with plate umpire Ramon DeJesus, who then ejected Astros hitting coach Alex Cintron.

By the end of the afternoon, Bregman was in a much better mood and signed autographs for fans after the final out.

The Astros won for the sixth time in their last eight games. They improved to 34-19 against teams with a .500 record or better.

Gavin Sheets got a career-high four hits for the White Sox, who lost for the second day in a row and split the four-game series.

After totaling eight runs in the first three games of the series, the Astros broke loose.

Houston scored six times in the fourth inning, chasing Lucas Giolito (9-7) in taking a 10-0 lead. Bregman homered off reliever Vince Velasquez to cap the burst and and homered again in the sixth.

Giolito lasted three-plus innings, matching his shortest start of the season against Cleveland on July 22, when he allowed six runs on nine hits.

Giolito has allowed 15 runs on 15 hits in two starts against the Astros this season.

Luis Garcia (10-8) blanked Chicago for the first four innings, but was pulled after needing 97 pitches to complete five innings. Yoan Moncada hit a three-run homer in the fifth.

The Astros were in position to score even more. White Sox center fielder AJ Pollock robbed Jose Altuve of extra bases with a catch near the top of the fence in the sixth.

White Sox: Are expected to announce the signing of veteran shortstop Elvis Andrus prior to Friday night’s game at Cleveland. Andrus, 33, would provide experience at shortstop in the wake of a finger injury suffered by two-time All-Star Tim Anderson, who isn’t expected to return until late September at the earliest. Andrus is a two-time All-Star and lifetime .270 hitter who was waived by the Athletics after batting .237 in 106 games. LHP Yoan Aybar was outrighted, presumably to make room for Andrus on the 40-man roster.

White Sox: OF Luis Robert (left wrist) missed his sixth consecutive start, and manager Tony La Russa believes the ailment is actually a bruise instead of a sprain, which was the original diagnosis. Robert pinch-ran Wednesday and La Russa ruled out an IL stint and said he remains day-to-day. "We can’t shame him into playing because that would be the wrong thing," La Russa said. … LHP Aaron Bummer (left lat strain) said he felt fine after throwing 26 pitches in his second bullpen session. Bummer plans to throw one more bullpen session, followed by at least one simulated game before heading to Triple-A Charlotte on a rehab assignment. "We’re definitely on the right track," Bummer said.

Astros: Will start RHP Lance McCullers Jr. (1-0, 0.00) at Atlanta on Friday night in a 2021 World Series rematch. McCullers threw six shutout innings Saturday in a win over the Athletics in his season debut after rehabbing from a right flexor tendon strain.

White Sox: Will start RHP Lance Lynn (3-5, 5.62) Friday night at Cleveland. He allowed two runs in six innings Sunday in a win over the Tigers.