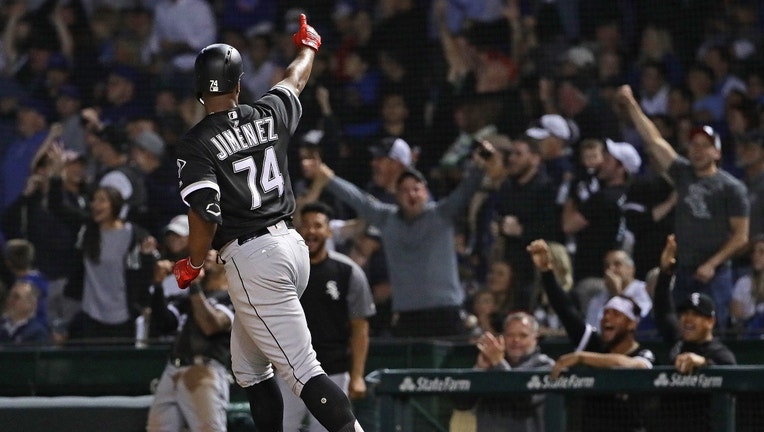 GLENDALE, Ariz. - Eloy Jiménez got a big contract before playing in a major league game, and his bat justified the deal once the Chicago White Sox left fielder made his debut.

Despite a sluggish start and injuries that cost him 40 games, Jiménez still managed to hit 31 homers and show what the excitement was all about.

Now he wants his defense to catch up, at least so that he can stay out there.

"It means a lot because I want to be able to play nine innings," Jiménez said Monday as the full squad of White Sox reported to Camelback Ranch. "That's why this year I put more effort in the defense. My year in the majors showed what I need to work on more."

Manager Rick Renteria hopes he doesn't have to take Jiménez out for defense.

“He started having some growth out there last year. I asked him, do you want me to take you out in the seventh, eighth or ninth? He said no.”

A lot has been expected of the 23-year-old since he was acquired from the Cubs as a minor leaguer as part of the deal for veteran left-hander José Quintana at the 2017 All-Star break.

The rare crosstown trade - the first between the Chicago teams since 2006 - provided immediate help for the Cubs, who went to the postseason in Quintana's first two seasons. But the patience of White Sox management and fans was rewarded last year with Jiménez's performance as well as the emergence of Yoán Moncada and Lucas Giolito, who were acquired in similar trades as prospects.

During spring training a year ago, Jiménez signed a contract worth a guaranteed $43 million that not only assured him of being with the White Sox on opening day, but will keep him with the franchise through at least 2024.

Jiménez knows how Luis Robert is feeling right now, because he was in the same position last season. Robert, the young Cuban, will be making his major league debut in center field, alongside Jiménez, and has already signed a deal guaranteeing $50 million for the next six years.

Jiménez knows what Robert is in for.

"You feel pressure because you want to show the people what you can do and you try to do too much. For the first month, I’m going to say, he’s going to be too anxious. I’m going to try to help him to not do that."

Certainly by the end of the season, Jiménez was a better hitter. He finished strong, hitting .308 in the final two months with 14 homers and 40 RBIs.

“At the end, I felt like everything was slowed down and was easy because I just tried to play the game and enjoy the game,” he said. "At the beginning, I had too much pressure because I tried to do too much. This year is going to be better because now that we’ve got Luis Robert, the attention is not going to be on me."

"We go over our general basic rules of comportment, things of that nature, and then what our team will be," Renteria said. Pressed for specifics, he declined but said, "I always get a little heated, but hopefully it's in a good way."