DeBrincat beat Jets goalie Connor Hellebuyck with a high shot at 9:42 to break a 1-all tie. Patrick Kane had a goal and an assist, and Brandon Hagel added an empty-netter.

"His flexibility is insane," Chicago defenseman Connor Murphy said. "Some of those saves he can make, where the puck seems to be looking like it’s going one way and it changes direction, or the guy makes a last-minute move where his body’s going one way and he can stick a leg out the other way. 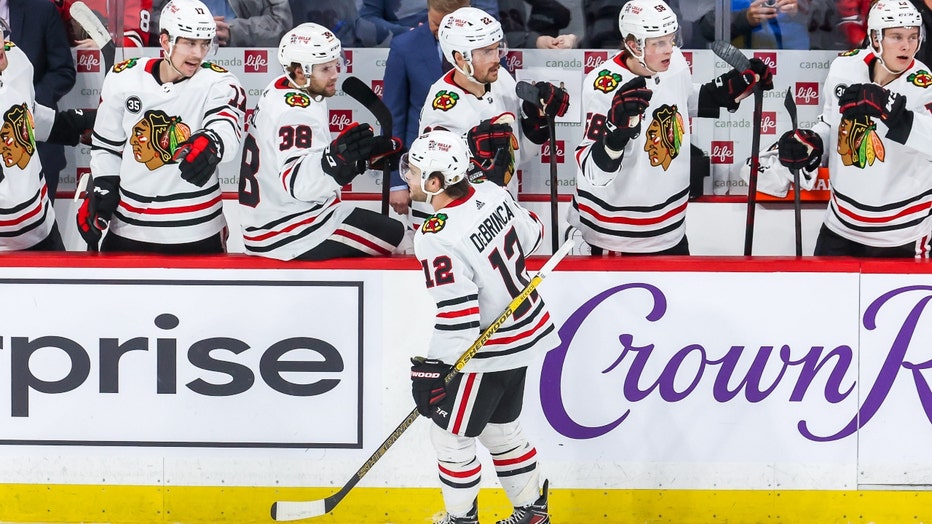 Alex DeBrincat #12 of the Chicago Blackhawks celebrates his third period goal against the Winnipeg Jets with teammates at the bench at the Canada Life Centre on February 14, 2022 in Winnipeg, Manitoba, Canada. (Jonathan Kozub/NHLI via Getty Images / Getty Images)

"I don’t know how he stays so limber. I’m not going to call him old, but staying so limber throughout such a lengthy career is impressive."

Winnipeg was 2-0-1 in its previous three games.

"When (Fleury) gets into a groove, he’s a guy that can really steal the flow of the game and I think we could have made it a lot tougher on him," Jets defenseman Nate Schmidt said.

There was no scoring in the first period and Chicago led 1-0 after the second.

Winnipeg outshot the Blackhawks 11-8 in the opening period. The Jets had the only power play, but Fleury turned aside two shots, including one from Winnipeg’s leading scorer, Kyle Connor.

The Blackhawks picked up the pace in the second and were rewarded with Kane’s 12th goal of the season.

Using Kirby Dach skating ahead of him as a bit of a screen, Kane snapped a low shot through Hellebuyck’s pads at 10:21.

Kane also had a shot sail wide of an open net and rang one off the crossbar.

Chicago had a power play early in the period but couldn’t get a shot on net.

Jets forward Adam Lowry got a short-handed breakaway, but Fleury appeared to throw his stick attempting a poke check and it hit Lowry’s stick to nix a good shot.

"I think I had him beat and his stick comes out and kind of gets in my way, but I still had a good chance to score," Lowry said. "It would have been nice to put that one in and get us up, but unfortunately it didn’t go in."

Some wondered if Fleury threw his stick on purpose and the Jets deserved a penalty shot, but Lowry said he talked to referee Kevin Pollock.

"(Pollock) thought it was a poke check," Lowry said. "I think it’s more of a strategic drop, if you will.

"It’s one of those ones — you can’t fault the ref there. It’s a tough play, they’re coming from behind and stuff, so it’s one of those things where you’d love to get the call."

Winnipeg had a 9-8 edge in shots in the second.

Scheifele evened the score at 6:17 of the third when he banged in a puck that had bounced off a player and landed at the side of the crease.

DeBrincat gave Chicago the lead again and Hagel added to it at 19:04.

Blackhawks: Host the Columbus Blue Jackets on Thursday in the opener of a six-game homestand.

Jets: Host the Minnesota Wild on Wednesday in the second of a four-game homestand. Winnipeg will be allowed a full-capacity crowd under health restrictions that relax Tuesday.