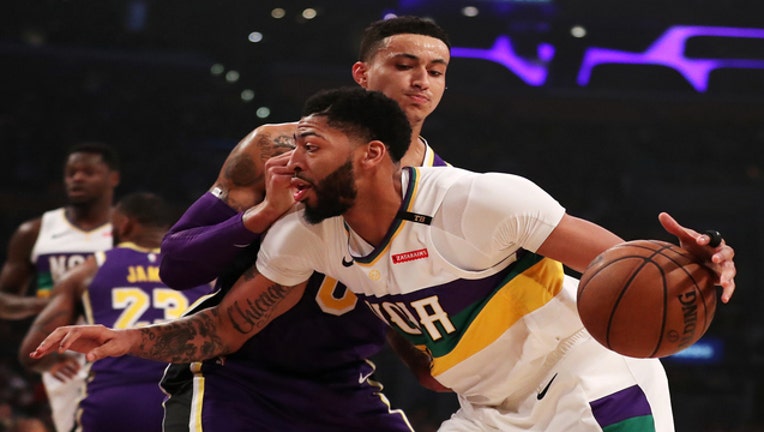 Anthony Davis #23 of the New Orleans Pelicans drives against Kyle Kuzma #0 of the Los Angeles Lakers during the first half at Staples Center on February 27, 2019 in Los Angeles, California. (Photo by Yong Teck Lim/Getty Images)

The Lakers did not immediately respond to requests for comment on the deal, which was first reported by ESPN's Adrian Wojnarowski, which cited "a person with knowledge of the deal not authorized to speak publicly."

The trade provides Lakers forward LeBron James with another superstar as he tries to lift the franchise back into championship contention after a six-year playoff drought.

The move would still leave the team with enough money to sign another big-name free agent this summer.

Davis, 26, has averaged 23.7 points and 10.5 rebounds during his seven-year NBA career, all with New Orleans.

He is under contract with the Pelicans through the 2020-21 season, although he holds a player option on the final year of his contract, meaning he could opt to be a free agent after this season.

It didn't take long for the news to stir excitement in the Southland. Los Angeles City Council President Herb Wesson tweeted: "Welcome to Los Angeles, Anthony Davis!" with a photo of Davis superimposed over the L.A. skyline.

CNS contributed to this story.