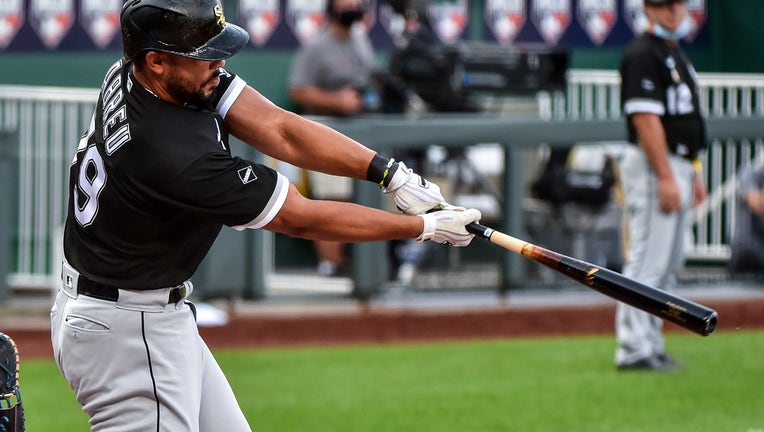 Jose Abreu #79 of the Chicago White Sox hits a two-run home run in the first inning against the Kansas City Royals at Kauffman Stadium on September 05, 2020. (Photo by Ed Zurga/Getty Images)

Abreu leads the majors with 40 RBIs in 40 games and extended his hitting streak to 19 games. His 425-foot, two-run shot pushed him past Baltimore's Anthony Santander for the longest streak this season.

Lucas Giolito (4-2) allowed three runs on five hits in six-plus innings. He struck out nine and walked none. Alex Colome earned his ninth save in 10 tries.

An error by Maikel Franco in the top of the fifth led to three unearned runs. Bubic pitched a career-high seven innings and only allowed four hits, with four strikeouts and one walk.

The Royals drew within 2-1 on Bubba Starling's leadoff home run in the third, his first homer since Sept. 11, 2019 in Chicago against the White Sox.

Tim Anderson's RBI single drove in James McCann in the fifth, and Grandal followed with his homer.

Franco doubled home Ryan O'Hearn in the seventh to draw the Royals to within 5-2 and send Giolito to the clubhouse. Adalberto Mondesi's RBI single drove in Franco.

Royals: DH Jorge Soler left the game after one at-bat in which he struck out swinging. The 2019 American League home run champion was removed with right oblique soreness. He came out of the game Wednesday and did not play Thursday with an oblique irritation. He was 0 for 5 Friday night.

The White Sox placed LHP Jace Fry on the 10-day injured list (retroactive to September 3) with back spasms, purchased the contract of RHP Alex McRae from the Schaumburg training facility and transferred LHP Aaron Bummer to the 45-day injured list. Manager Rick Renteria said the move with Bummer did not signify a delay in his recovery. "He's on the same throwing program. He's playing catch."

The Royals will send RHP Matt Harvey (0-2, 14.09 ERA) out for his fourth start. He has yet to get past the third inning in any of his three starts with Kansas City. He allowed two hits in 2/3 inning in his last appearance, against the White Sox, but didn't yield a run. He's 1-0 with a 0.00 ERA (16 2/3 innings) in three appearances (two starts) against the White Sox in his career.