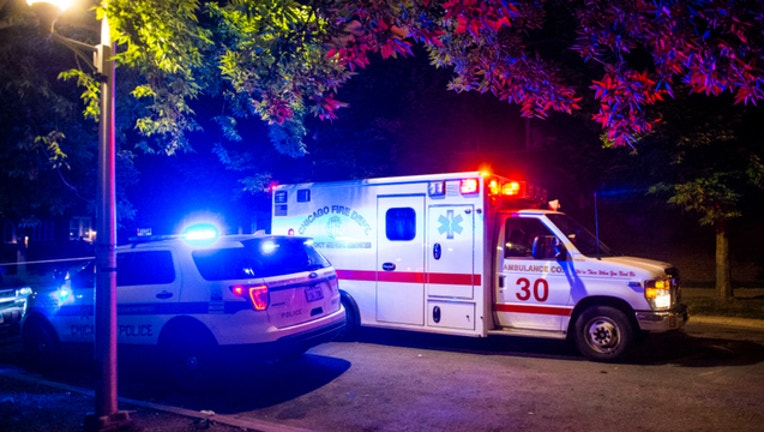 Police and EMS respond to the scene where a person was shot and killed Tuesday morning in the 1500 block of West 79th Street. | Tyler LaRiviere/Sun-Times

CHICAGO (SUN TIMES MEDIA WIRE) - One person was killed and five others were wounded between about 1 a.m. and 9:45 p.m. Tuesday in shootings across the city.

The only fatal shooting of the day happened about 1:10 a.m. in the Gresham neighborhood on the South Side.

Oceana Jones, 21, was at a gas station with her boyfriend when a group of four males approached them and asked him about his gang affiliation in the 1500 block of West 79th Street, according to Chicago Police and the Cook County Medical Examiner’s Office.

The couple ran away but the group chased after them. One of the males fired shots, striking Jones in her back, police said.

She was pronounced dead at the scene. She lived in the same neighborhood, authorities said.

The group ran off in an unknown direction.

The most recent non-fatal shooting happened about 9:45 p.m. in the Little Village neighborhood on the Southwest Side.

A 13-year-old boy and a 23-year-old woman, who are cousins, were sitting in a parked vehicle in the 3700 block of West 28th Street when two people got out of a Toyota Corolla and started shooting, according to police.

The boy suffered a gunshot wound to his hand, police said. He was taken to Stroger Hospital in good condition.

The woman was shot in the head and taken to Mount Sinai Hospital, where her condition was stabilized, police said.

About the same time, a man was found with a gunshot wound to his face in the parking lot at Mount Sinai Hospital in the Douglas Park neighborhood on the Southwest Side.

Chicago Fire officials found the 25-year-old, who they believe was shot in the 3400 block of West Flournoy and dropped off at the hospital.

The circumstances of the shooting weren’t immediately known. The man was unable to speak and there were no witnesses, police said.

The man was being treated at Mount Sinai, where he was in critical condition, police said.

A 17-year-old boy was walked into Mount Sinai Hospital earlier in the evening after being shot in the Gage Park neighborhood on the Southwest Side.

The boy was walking when a black car drove by and the driver fired shots, striking him in the hand about 6:40 p.m. in the 2700 block of West 52nd Street, according to from police.

He was in good condition at Mount Sinai Hospital, police said.

The first shooting of the day happened about 4 a.m. in  the Brainerd neighborhood on the South Side.

A 30-year-old man was walking in the 9400 block of South Halsted when he heard gunshots and realized he’d been shot in the left knee, according to police.

He took himself to Holy Cross Hospital, where he was in good condition, police said.

On Monday, one person was killed and 15 people were wounded in shootings across the city.