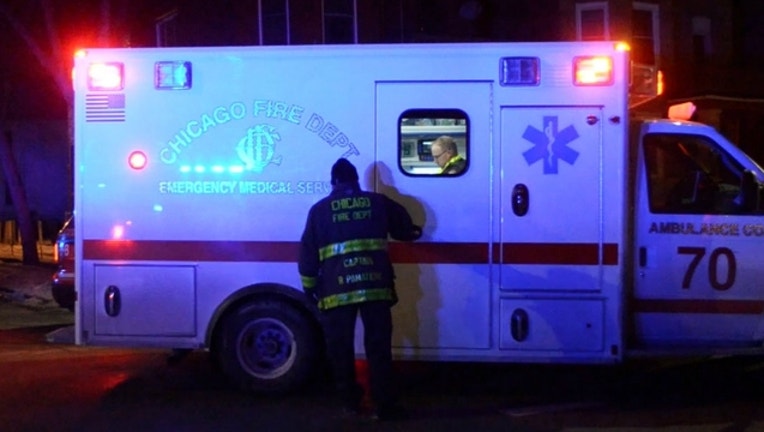 Two men who were wounded in a shooting early Thursday in the 6600 block of South Evans were taken to Stroger Hospital, where they were both pronounced dead. | Justin Jackson/Sun-Times

CHICAGO (SUN TIMES MEDIA WIRE) - Two people were killed in a shooting early Thursday, kicking off a violent day that ended in eight other people shot across Chicago.

The double-fatal attack pushed the city to 18 shooting homicides — out of 21 total homicides — in as many days so far this year, according to data maintained by the Chicago Sun-Times. The killings ended a period of more than six days without a fatal shooting in Chicago.

Ronald E. Robinson, 36, and Jordasch W. Robinson, 27, were sitting in a vehicle about 2:50 a.m. in the 6600 block of South Evans when someone walked up and opened fire, police and the Cook County Medical Examiner’s Office said. The younger man was shot in his chest, and the older man suffered a gunshot wound to his left side.

They were taken to Stroger Hospital, where they were both pronounced dead within the hour, authorities said.

The most recent nonfatal shooting happened late Thursday night in the South Side Englewood neighborhood. An 18-year-old woman was walking on a sidewalk at 11:33 p.m. in the 7100 block of South Halsted when someone in a blue car fired shots, police said. She was taken to South Shore Hospital with a graze wound to the right hand and her condition was stabilized.

More than two hours earlier, another woman was shot in the West Garfield Park neighborhood on the West Side. She was with a male in an apartment at 9:14 p.m. in the 4300 block of West Gladys when they got into an argument, police said. During the argument, the male took out a handgun and shot her in the left leg and left elbow. She was taken to Mount Sinai Hospital, where her condition was stabilized.

About a half hour earlier, a man was shot in the Far South Side Longwood Manor neighborhood. The 32-year-old was sitting in a vehicle at 8:42 p.m. in the 10100 block of South Winston when someone opened fire from a gray minivan, hitting him in the left arm, police said. He drove himself to Holy Cross Hospital, where his condition was stabilized.

About 6 p.m., a 15-year-old boy was shot when he answered the door of his West Side Lawndale neighborhood home. He opened the door in the 1200 block of South Homan and was met by a male armed with a gun, police said. The boy tried to run away and was shot in the back multiple times. He was taken to Stroger Hospital in good condition. The shooter ran away southbound down the east alley of Homan.

More than an hour before that, two people were shot in the Austin neighborhood on the West Side. A 33-year-old man was driving a vehicle with a 17-year-old girl in the passenger seat when the stopped at a stop sign about 4:50 p.m. in the 600 block of North Leclaire, police said. While they were stopped, a group of three to five males walked up and opened fire before running away. The man was shot in the left hip, lower abdomen and groin, while the girl was shot in the right foot and both thighs. They were taken to West Suburban Medical Center in Oak Park, where their conditions were stabilized.

Thursday’s first nonfatal shooting happened several hours earlier in Austin. A silver Chevrolet Impala pulled up about 1:30 p.m. in the 5200 block of West Adams and someone inside fired at the men, ages 23 and 21, police said. The older man was shot in the left leg and was taken to Mount Sinai Hospital. The younger man was shot in the right knee and was taken to West Suburban Medical Center. Both of their conditions were stabilized.