Beach Hazard Statement
from MON 10:00 AM CDT until TUE 7:00 AM CDT, Kenosha County

The 9/11 anniversary commemorations have begun, first at ground zero with a tolling bell and a moment of silence, exactly 20 years after the start of the deadliest terror attack on U.S. soil.

President Joe Biden, former Presidents Barack Obama and Bill Clinton, members of Congress, and other dignitaries joined a crowd of victims’ relatives Saturday on the Sept. 11 memorial plaza in New York. The memorial stands where the World Trade Center’s twin towers were rammed and felled by hijacked planes. 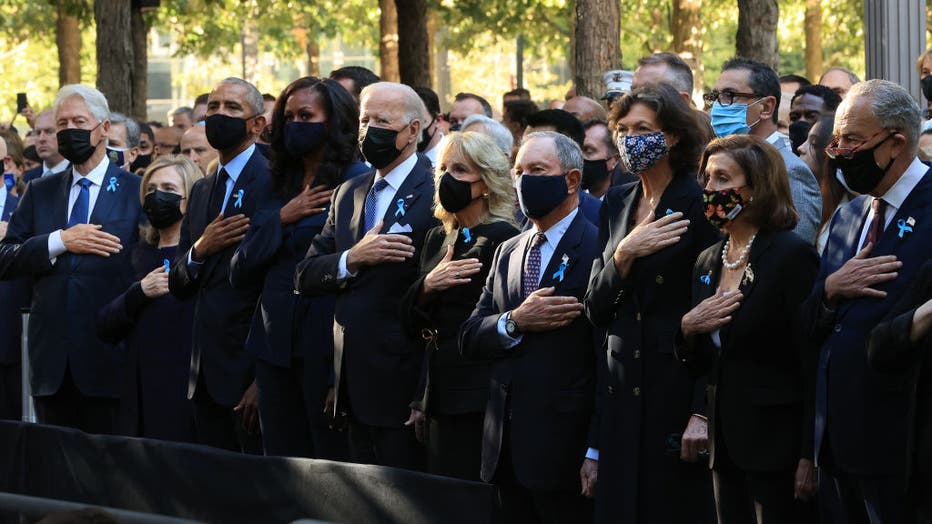 Hundreds of Americans gathered at ground zero for the remembrance, some carrying photos of loved ones lost in the attacks.

Before the event began, a jet flew overhead in an eerie echo of the attacks, drawing a glance from Biden toward the sky. For much of the ceremony he stood with his arms crossed and head bowed, listening while the names of the victims were read. At one point, the president wiped a tear from his eye.

Victims’ relatives read the names of the fallen, a tradition since the first anniversary of the attacks. Bruce Springsteen performed his song "I'll See You In My Dreams" while accompanying himself on guitar and harmonica. 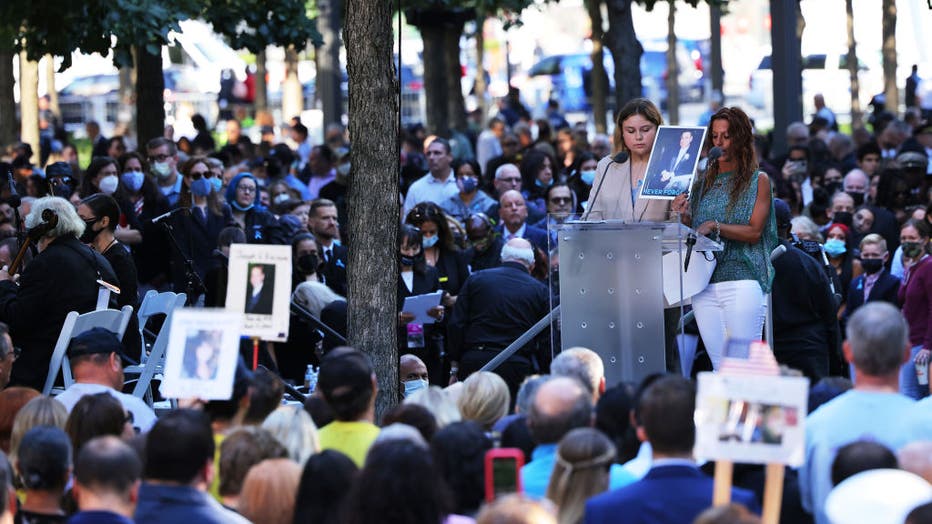 NEW YORK, NEW YORK - SEPTEMBER 11: People listen as the names of those who died on 9/11 are read during the annual 9/11 Commemoration Ceremony at the National 9/11 Memorial and Museum on September 11, 2021 in New York City. During the ceremony, six m 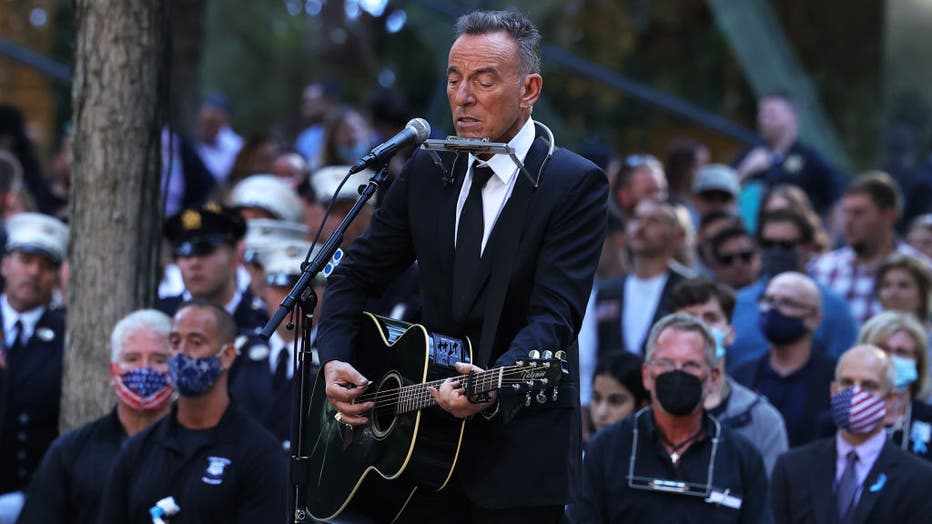 Bruce Springsteen performs during the annual 9/11 Commemoration Ceremony at the National 9/11 Memorial and Museum on September 11, 2021 in New York City. (Photo by Michael M. Santiago/Getty Images)

The Sept. 11 anniversary commemoration at ground zero has begun with a tolling bell and a moment of silence, exactly 20 years after the start of the deadliest terror attack on U.S. soil.

Vice President Kamala Harris traveled to Shanksville, Pennsylvania, for a separate event before she was set to join the president at the Pentagon.

She was set to speak at the Flight 93 National Memorial, commemorating the heroes that brought down a hijacked plane that was headed for the U.S. Capitol. 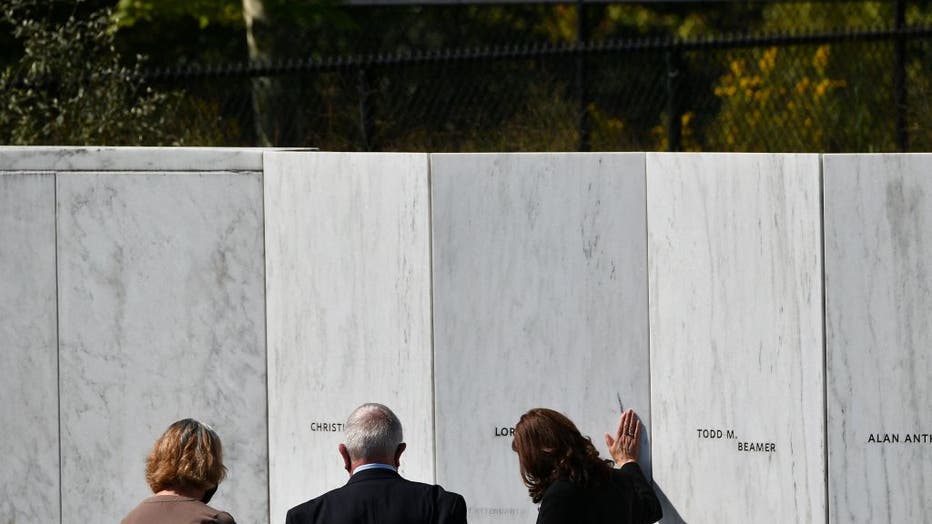 US Vice President Kamala Harris (R) touches the memorial wall during a 9/11 commemoration at the Flight 93 National Memorial in Shanksville, Pennsylvania on September 11, 2021. (Photo by Mandel Ngan/AFP via Getty Images)

Harris praised their courage and the resilience of the American people, and spoke about the unity that Americans experienced in the days following the attacks.

"We were all reminded that unity is possible in America. We were reminded also that unity is imperative in America," she said. "It is essential to our shared prosperity, to our national security and to our standing in the world.

"And by unity, I don’t mean uniformity. We had differences of opinion in 2001 as we do in 2021. And I believe that in America our diversity is our strength."

He said Americans learned much about themselves on Sept. 11.

Former President George W. Bush speaks at the Sept. 11 memorial in Shanksville, Penn. on the 20th anniversary of the terror attacks.

"We learned that bravery is more common than we imagined, emerging with sudden splendor in the face of death," he remarked.

"The 33 passengers and seven crew of Flight 93 could have been any group of citizens selected by fate. In a sense, they stood in for us all," Bush said. "The terrorists soon discovered that a random group of Americans is an exceptional group of people."

He encouraged Americans to put aside their political differences in the spirit of what he saw after 9/11.

"So much of our politics has become a naked appeal to anger, fear and resentment," Bush said. "On America’s day of trial and grief, I saw millions of people instinctively grab their neighbor’s hand and rally to the cause of one another." 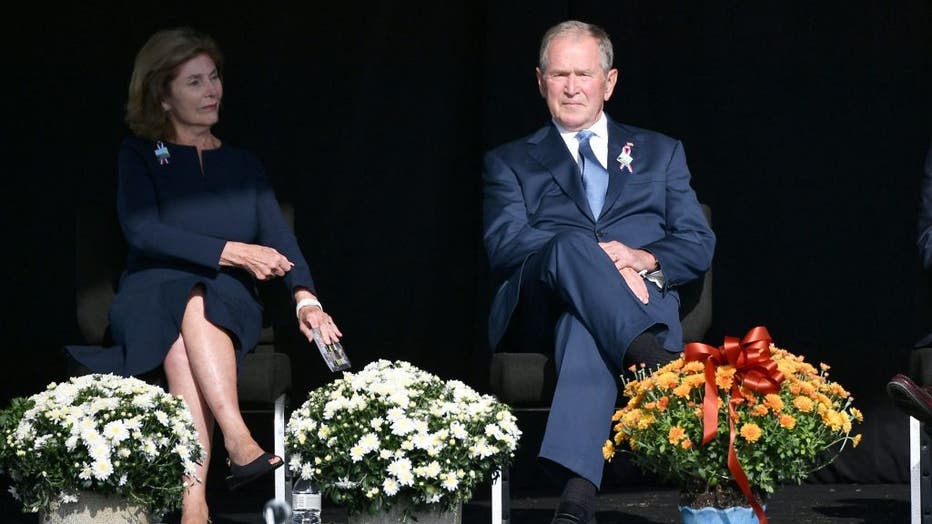 President Biden arrived at the site just after 12 p.m. ET and laid a wreath before walking out to the site of impact to pay their respects.

The first lady was by his side as well as Gordon Felt, who lost his brother, Edward, on the flight. Family members of the victims were also waiting at the spot that marked the crash. 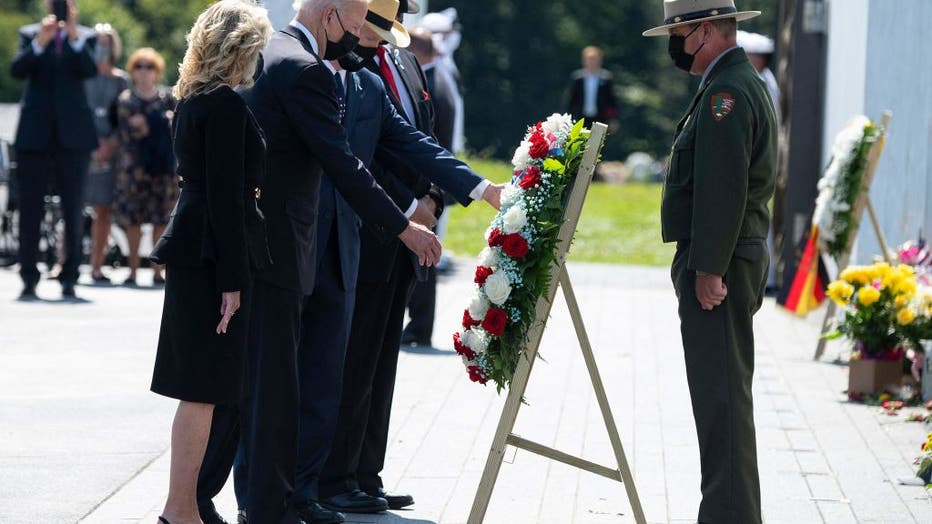 US President Joe Biden and First Lady Jill Biden lay a wreath at the Flight 93 National Memorial, marking the 20th anniversary of the 9/11 attacks, on September 11, 2021, in Shanksville, Pennsylvania. (Photo by Jim Watson/AFP via Getty Images) 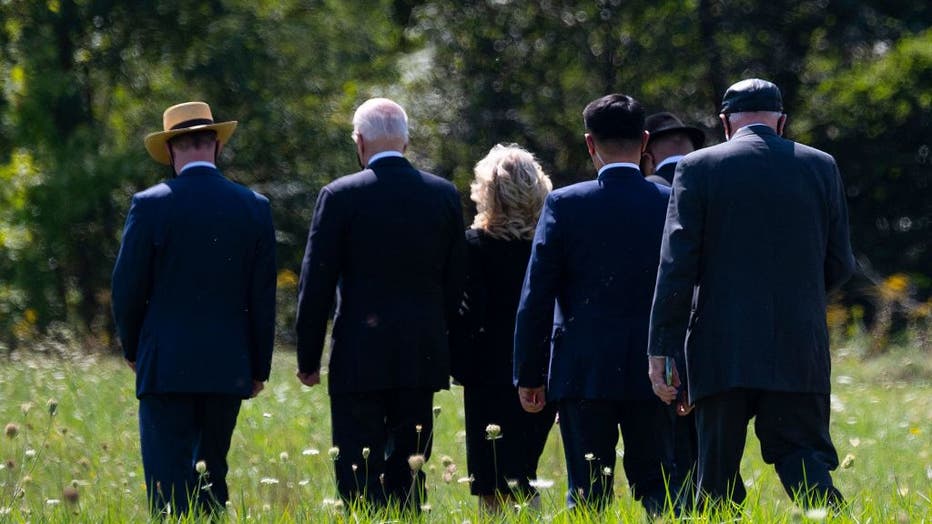 President Joe Biden is ending his day of remembrance by paying his respects at the National Pentagon 9/11 Memorial.

Biden and wife Jill took a moment of silence before a wreath studded with white, purple and red flowers on display in front of the memorial benches that mark the 184 victims of the attack on the Pentagon. 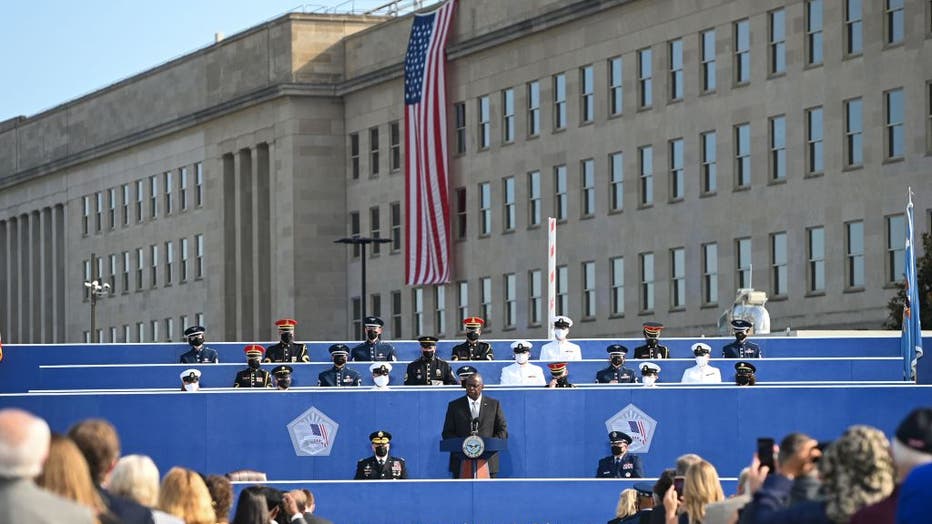 US Secretary of Defence Lloyd Austin speaks during a remembrance ceremony to mark the 20th anniversary of the 9/11 attacks, at the Pentagon in Washington, DC on September 11, 2021. (Photo by Saul Loeb/AFP via Getty Images)

Vice President Kamala Harris and her husband, Doug Emhoff, also took a moment of silence at the memorial. All four listened as a uniformed bugler played taps.

It was Biden’s third and final stop of the day, after visiting the National September 11 Memorial in New York City and the Flight 93 Memorial in Shanksville, Pennsylvania earlier in the day. He is slated to spend the rest of the weekend at his home in Wilmington, Delaware.

Chief of Staff of the Army Gen. Mark A. Milley, commemorates the victims and Survivors of the September 11th, 2001 terrorists attacks at the Pentagon.

The only other post-9/11 U.S. president, Donald Trump, skipped the official memorial ceremonies. Instead, he visited the 17th police precinct and the neighboring fire station in Manhattan where he delivered remarks that predominantly criticized the withdrawal from Afghanistan. He expressed surprise about why that hadn’t come up in other 9/11 memorial speeches, and also hinted at another presidential run 2024.

Other observances — from a wreath-laying in Portland, Maine, to a fire engine parade in Guam — were planned across a country now full of 9/11 plaques, statues and commemorative gardens.

Twenty years ago, the 11th of September dawned as just a date. By midnight, it was 9/11, the staggering starting point for a new era of terror, war, politics, patriotism and tragedy.

The U.S. marks the milestone anniversary Saturday under the pall of a pandemic and in the shadow of a frantic withdrawal from Afghanistan, which fell to the same militant rulers who gave safe haven to the plotters of the 2001 attacks.

"It’s hard because you hoped that this would just be a different time and a different world. But sometimes history starts to repeat itself and not in the best of ways," said Thea Trinidad, who lost her father in the attacks and has signed up to read victims' names at the ceremony at ground zero in New York.

20 years after Sept. 11, Biden says unity is our greatest strength

In a video released the night before the 20th anniversary of the September 11th terrorist attacks, President Joe Biden mourned the ongoing losses of that day.

In a video released Friday night, Biden mourned the ongoing losses of 9/11.

"Children have grown up without parents, and parents have suffered without children," he said. But the president also spotlighted what he called the "central lesson" of Sept. 11: "that at our most vulnerable ... unity is our greatest strength."

Obama has lauded the heroes of 9/11 — and of the years since — in a message to mark the 20th anniversary.

"One thing that became clear on 9/11 — and has been clear ever since — is that America has always been home to heroes who run towards danger in order to do what is right," said Obama, who was U.S. President from 2009 to 2017.

He said the enduring image for him and his wife Michelle of that day was not the wreckage and destruction but the people. He singled out firefighters who ran up the stairs as others were running down, passengers who stormed the cockpit of their plane and volunteers who came forward across the country in the days that followed.

Using hijacked planes as missiles, the assailants inflicted the deadliest terrorist attacks on U.S. soil, taking nearly 3,000 lives, toppling the twin towers and ushering in an age of fear.

Security was redefined, with changes to airport checkpoints, police practices and the government's surveillance powers. In the years that followed, virtually any sizeable explosion, crash or act of violence seemed to raise a dire question: "Is it terrorism?" Some ideological violence and plots did follow, though federal officials and the public have lately become increasingly concerned with threats from domestic extremists after years of focusing on international terror groups in the wake of 9/11.

Sept. 11 propelled a surge of shared grief and common purpose, but it soon gave way.

A "war on terror" led to invasions of Iraq and Afghanistan, where the longest U.S. war ended last month with a hasty, massive airlift punctuated by a suicide bombing that killed 169 Afghans and 13 American service members and was attributed to a branch of the Islamic State extremist group. The U.S. is now concerned that al-Qaida, the terror network behind 9/11, may regroup in Afghanistan.

The Taliban flag was raised Friday and could be seen waving over the presidential palace in Kabul on Saturday.

Muslim Americans endured suspicion, surveillance and hate crimes. The quest to understand the catastrophic toll of the terror attacks prompted changes in building design and emergency communications, but it also spurred conspiracy theories that seeded a culture of skepticism. Schisms and resentments grew over immigration, the balance between tolerance and vigilance, the meaning of patriotism, the proper way to honor the dead, and the scope of a promise to "never forget."

New York faced questions early on about whether it could ever recover from the blow to its financial hub and restore a feeling of safety among the crowds and skyscrapers. New Yorkers ultimately rebuilt a more populous and prosperous city but had to reckon with the tactics of an empowered post-9/11 police department and a widened gap between haves and have-nots.

RELATED: Afghanistan and the Taliban: From 9/11 to today 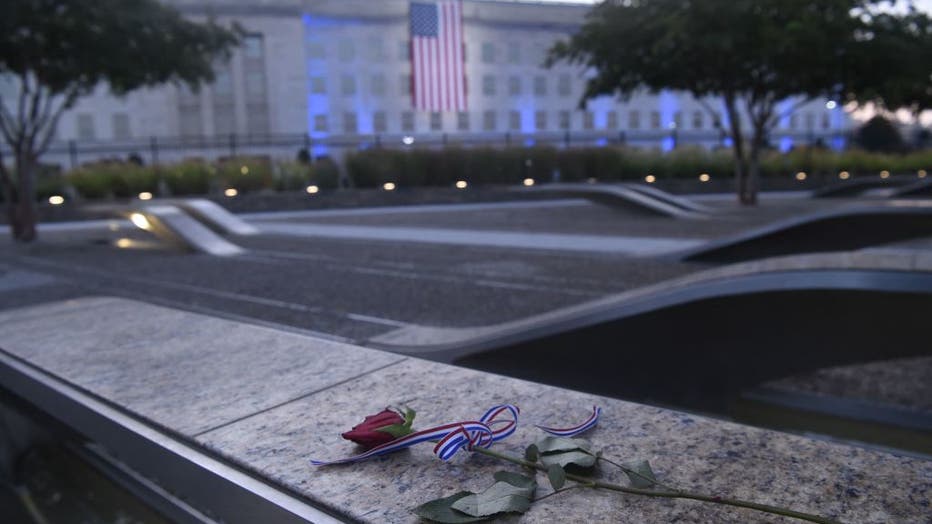 Around the world, Queen Elizabeth II marked the 20th anniversary of the Sept. 11 attacks by offering her sympathies to the victims, survivors and families affected by the atrocity.

In a message to U.S. President Joe Biden, the British monarch remembered the "terrible attacks" on New York and Washington, D.C.

"My thoughts and prayers — and those of my family and the entire nation — remain with the victims, survivors and families affected, as well as the first responders and rescue workers called to duty,’’ she said.

"My visit to the site of the World Trade Center in 2010 is held fast in my memory. It reminds me that as we honor those from many nations, faiths and backgrounds who lost their lives, we also pay tribute to the resilience and determination of the communities who joined together to rebuild.″

Prime Minister Boris Johnson has also remembered the attacks, issuing a statement ahead of the anniversary saying that the terrorists had failed to "shake our belief in freedom and democracy."

"They failed to drive our nations apart, or cause us to abandon our values, or to live in permanent fear."

South Korean President Moon Jae-in has expressed his "deepest sympathies" to U.S. President Joe Biden and the American people marking the 20th anniversary of the 9/11 attacks and says South Korea as a key ally will continue to support U.S. efforts to fight terrorism.

Moon in a message posted on Twitter and Facebook Saturday said the "shock of that day still remains as deep wounds in the hearts of so many" and that "no violence can win against peace and inclusiveness."

He said South Korea as "American’s strong ally will continue to actively join your and the international community’s efforts to combat terrorism."

RELATED: Honoring the fallen: Full list of names of the 9/11 victims