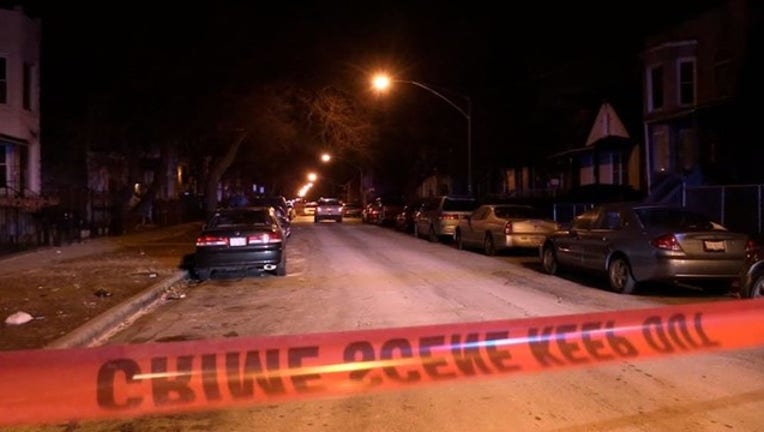 3 people were shot on the 3900 west block of Arthington this morning including one male victim who was shot in the face. | Justin Jackson/ Sun-Times

Two people were wounded in the most recent shooting, which happened early Tuesday on the South Side. A 24-year-old woman and a 22-year-old man were in a gray Prius just before 2 a.m. in the 5900 block of South Sacramento when someone fired shots from another vehicle, according to Chicago Police. The woman suffered gunshot wounds to her left elbow and a graze wound to the back of her head, and the man was shot in his left leg and back. They drove to Mount Sinai Hospital, where their conditions stabilized.

About an hour earlier, a 23-year-old man was shot in the University Village neighborhood on the Near West Side. He was walking on the sidewalk in the 1500 block of South Morgan when he heard shots and felt pain, police said. He had been shot in the chest. The man was driven to Rush University Medical Center, where his condition stabilized.

Three people were wounded in a Bronzeville neighborhood shooting Monday night on the South Side. They were standing in a courtyard at 7:43 p.m. in the 4200 block of South Michigan when an unknown male approached and opened fire, according to Chicago Police. A 17-year-old boy was shot in the arm and leg, and a 26-year-old man was shot in his right hand. They were both taken to Mercy Hospital. The third person, a 24-year-old man, was taken to Stroger Hospital with a gunshot wound to the leg. All three of their conditions had stabilized.

At 5:16 p.m. Monday, a 28-year-old man was shot in the Washington Heights neighborhood on the South Side. He was sitting in a parked vehicle in the 9900 block of South Carpenter when he heard shots and felt pain, police said. He had been shot in the back. The man drove to Christ Medical Center in Oak Lawn, where he was in serious condition.

A 26-year-old man was shot at 12:18 p.m. Monday in the West Garfield Park neighborhood. He was arguing with someone in the 4700 block of West Lake when he was shot in the leg, police said. He was taken in good condition to Stroger Hospital. The incident ended a period of almost 17 hours in Chicago with no reported shootings.

Before that, the last shooting happened Sunday evening in the West Pullman neighborhood on the Far South Side. A 25-year-old man was shot in the leg at 6:12 p.m. in the 12300 block of South Union, police said. He was taken to Christ Medical Center in Oak Lawn for treatment.

Two men were shot early Sunday in the Little Village neighborhood on the Southwest Side. The men, ages 19 and 23, were sitting in a parked car about 12:40 a.m. in the 2800 block of West 21st Street when someone fired shots, according to Chicago Police.

Nearly 4 hours earlier, a 16-year-old boy was wounded in a shooting in the North Side Rogers Park neighborhood. The boy was sitting in his vehicle at 8:24 p.m. in the 6700 block of North Hermitage when an unknown male approached and fired shots, police said. The boy suffered multiple gunshot wounds to his body and was taken to Saint Francis Hospital in Evanston, where his condition stabilized.

The weekend’s first shooting happened about 5:45 p.m. in the West Garfield Park neighborhood. A 25-year-old man was shot in the buttocks near Madison and Kilbourn, police said. He took himself to Loretto Hospital, where he was in good condition.

At least 13 other people have been wounded in shootings across the city between 5:45 p.m. Friday and 2 a.m. Tuesday.