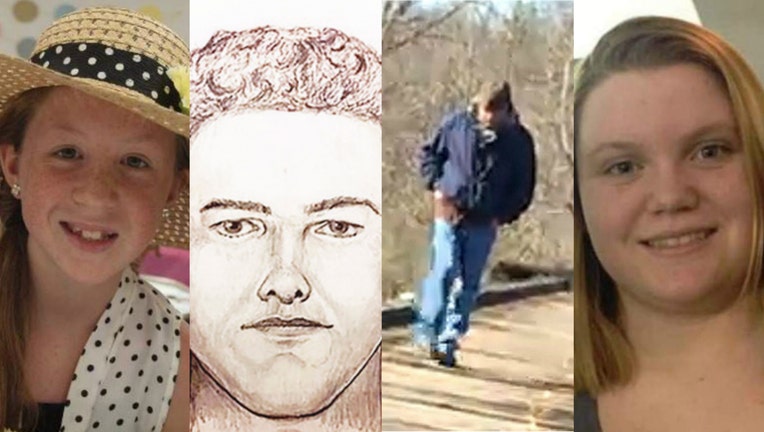 DELPHI, Ind. - The reward for information leading to a conviction in the 2017 killings of two teenage girls slain during a hiking trip in northern Indiana has grown to $325,000, state police said Monday.

The reward fund was boosted by an anonymous donation of $100,000, Indiana State Police said in a statement which said the full $325,000 reward "will be given to anyone who can provide information that leads to the arrest and conviction of the person responsible for the deaths of Abigail Williams and Liberty German."

The bodies of German, 14, and Williams, 13, were found in a rugged area near a hiking trail on Feb. 14, 2017, one day after they vanished while walking on that trail near the Monon High Bridge, just outside their hometown of Delphi, about 60 miles (97 kilometers) northwest of Indianapolis.

Within days of the killings, investigators released two grainy photos of a suspect walking on the abandoned railroad bridge the girls had visited, and an audio recording of a man believed to be the suspect saying "down the hill."

Authorities have since released two sketches of the suspected killer, including one in April 2019 based on video from German’s cellphone that’s believed to be more accurate than a sketch released in July 2017.

Police also released video in April 2019 which shows the man suspected of killing the teens walking on the abandoned railroad bridge the girls had visited.