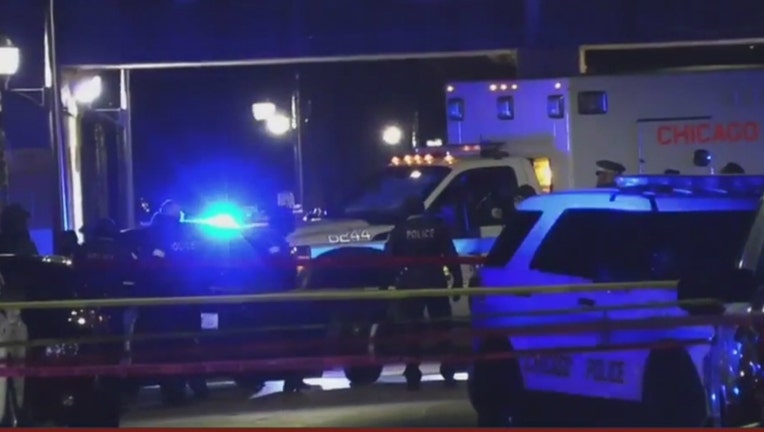 CHICAGO - Five people have been killed and 33 others wounded in shootings across Chicago since Friday evening.

Sunday, 13 people were shot at a memorial party in Englewood, including a 16-year-old boy who is in critical condition.

The shooting happened about 12:34 a.m. Sunday in the 5700 block of South May Street, Chicago police said.

The incident stemmed from a dispute inside the home, Chief of Patrol Fred Waller said at a press conference Sunday morning. Shots were fired inside, and people scattered outside, he said. The gunfire continued as people ran out, with two people appearing to shoot “randomly” at those exiting the building. At one point the shots were aimed at someone in a vehicle.

Two people were taken into custody, and a revolver was recovered on one of the suspects, he said.

The victims were nine men and four women between 16 and 48 years old, Waller said. Seven people were taken to area hospitals by ambulance, and six others — including one of the suspects — went on their own.

Witnesses told police the memorial party was being held for 22-year-old Lonell Irvin, who was fatally shot during an attempted carjacking in April, Chicago police spokesman Tom Ahern said.

While detectives are trying to pinpoint a motive, the preliminary investigation suggests the shooting was an isolated incident.

“Right now, it doesn’t appear to have been a targeted or retaliation-type incident,” Ahern said. “It appears to be more of a personal dispute inside the party that spilled out into the street.”

The most recent fatal shooting killed a man Sunday in Homan Square on the West Side.

About 9 p.m., the 37-year-old man was standing on the sidewalk in the 3300 block of West Harrison Street, when two males got out of a red 2018 Mitsubishi Eclipse and fired several shots at him, police said. The men then got back into the vehicle and sped off.

The man was rushed to Mt. Sinai Hospital where he later died, police said.

Saturday, a man was killed in Chicago Lawn on the Southwest Side.

A 41-year-old man was on the corner about 2:20 p.m. in the 6000 block of South Fairfield Avenue when someone walked up and fired shots at him, police said. The man was struck in the back and abdomen and taken to Christ Medical Center in Oak Lawn where he was pronounced dead.

The shooter ran off east on 60th Street, police said. The medical examiner’s office has not provided details about the death.

A man was shot to death Saturday morning at a home in Rogers Park on the North Side.

Albino Amador-Vazquez was inside a home about 4:35 a.m. in the 1600 block of West Morse Avenue when a male suspect kicked in the door and opened fire, Chicago police and the Cook County medical examiner’s office said. Amador-Vazquez was shot in the face and pronounced dead at the scene.

Earlier, a man was killed in Grand Crossing on the South Side.

Dion Bell, 27, standing on the sidewalk at 1:27 a.m. in the 7300 block of South Blackstone Avenue when someone shot at him from a black sedan, according to police and the medical examiner’s office. He was hit multiple times and taken to the University of Chicago Medical Center, where he was pronounced dead.

Another man was shot and killed Friday in Austin on the West Side.

According to a witness, 44-year-old Antonio Cox opened the front door to a residential building about 9:20 p.m. in the 5100 block of West Ferdinand Street and someone unleashed gunfire, police and the medical examiner’s office said. Cox, who lived in Austin, was struck in the head and pronounced dead at the scene.

The most recent nonfatal shooting wounded a 21-year-old man Sunday in South Shore.

About 9 p.m., he was on the sidewalk in the 2100 block of East 71st Street, when he heard shots and felt a pain, Chicago police said.

He was struck in the abdomen and taken to the University of Chicago Medical Center where he was stabilized, police said.

The weekend’s first nonfatal attack left two men injured Friday in Austin on the West Side.

At least 18 other people have been wounded so far in weekend gun violence.

Last weekend, two people were killed and 15 others were injured in shootings throughout the city.