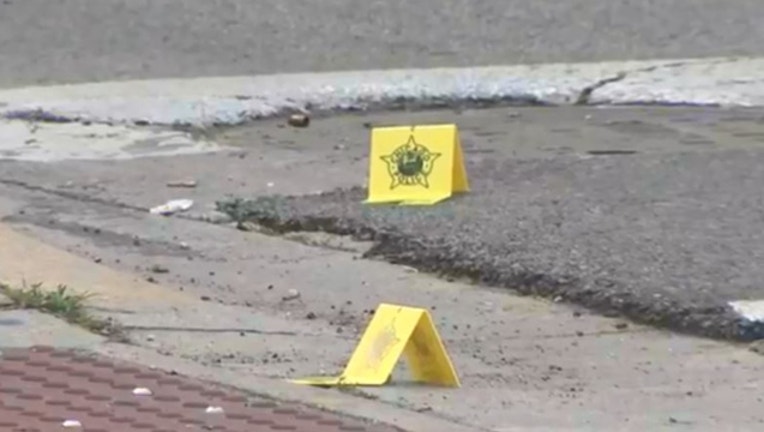 The last shooting during the 24-hour period wounded a 16-year-old boy in the Washington Park neighborhood on the South Side.

The boy and a 23-year-old man were standing on the street about 9 p.m. when someone in a black car opened fire in the 6100 block of South Indiana, Chicago Police said. A 23-year-old man was struck in the neck and right shoulder and taken to the University of Chicago Medical Center, where he was in critical condition. A 16-year-old boy was shot in the left knee, and his condition stabilized at the University of Chicago Medical Center.

Another double shooting wounded a man and woman in the Lawndale neighborhood on the West Side. The 21-year-old man and 42-year-old woman were on a sidewalk about 8:50 p.m. when they were shot through a window in the 1100 block of South Richmond, police said. The man was shot in the right leg and right arm and was taken to Mount Sinai Hospital in good condition. The woman was grazed in her left leg and declined medical attention at the scene. The pair possibly knew the shooter, who ran from the scene after the shooting.

About the same time, a 43-year-old woman was wounded in an Uptown shooting on the North Side. She was shot in the chest by someone she knew in the 4900 block of North Sheridan, according to police. She was found in the living room of an apartment, and was taken in serious condition to Illinois Masonic Medical Center.

Hours earlier, a man was wounded in a South Side Grand Crossing neighborhood shooting. The 54-year-old was shot in the right foot at 4:33 p.m. during an argument in the 6800 block of South Dante, according to police. He was in good condition at the University of Chicago Medical Center.

A person of interested was being questioned after a shooting that critically wounded a man in the Chatham neighborhood on the South Side. The 27-year-old man was walking on the sidewalk about 12:50 p.m. in the 400 block of East 80th Street when he walked past two people, according to police.

A short time later, one of them then started shooting in his direction. The man was taken to University of Chicago Medical Center in critical condition with a gunshot wound to the back, police said. Area South detectives were questioning a person of interest in connection with the shooting.

The first reported shooting Thursday happened in the Burnside neighborhood on the Far South Side. A 24-year-old was driving when he heard shots and felt pain about 2 a.m. in the 9200 block of South University, according to police. He was shot in the left hand and took himself to MetroSouth Medical Center, where his condition was stabilized.

In addition to the people shot Thursday, a 63-year-old woman was cut by shattered glass during a shooting in the Gresham neighborhood. She told investigators that she heard gunshots about 4 p.m. while sitting on a porch outside her home in the 7600 block of South Carpenter, police said. The woman was initially listed as being shot in her hand, but her wounds were later found to be caused by shattered glass. She was taken to St. Bernard Hospital, where she was listed in good condition.